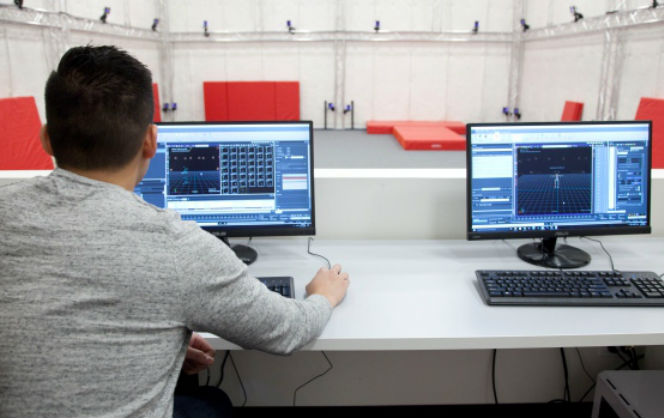 Today Vancouver Film School (VFS) open their commercial Performance Capture Studio, setting themselves apart from others as the only film school to offer this unique program. The school partnered with cutting-edge performance capture company Mimic Performance Capture, Inc. (Mimic) to build one of Canada’s largest studios.

The Performance Capture Studio is designed to be the leading global performance capture provider in terms of capacity for advanced stunt work, voice work, camera systems, methodology, and applied research. This will allow VFS and Mimic to collaborate on the development and delivery of specialized curriculum and training workshops for VFS programs, staff, and students.

With the addition of this facility VFS alumni will have first-priority for all commercial performance capture employment opportunities at the new studio, as well as enhanced training and education in the latest Motion Capture skills and techniques. Furthermore, Mimic will mentor students on projects involving performance capture, and work with VFS’s animation, game, film-based, and acting programs to identify best practices, guidelines, and processes for using performance capture at the school. The VFS-Mimic partnership marks an important step in the development of an elite performance capture community in Vancouver.

The studio was completed in record time and has seen a large number of bookings from both the gaming and film/TV production industry prior to its opening. Later this summer the studio will be opening their doors to a number of big companies such as Gearbox, Capcom, Waterproof Studios and House of Cool.

“At Vancouver Film School, our aim is to deeply integrate our programs with leading entertainment media/production companies, providing industry and educational insight for our students. This applied approach to learning will have far reaching benefits for our students as it makes their first day at VFS their first day on the job,”

“We’re excited to be collaborating with VFS, the school produces the highest caliber of graduates and we’re looking forward to helping shape these future industry leaders,”

“When you are directing actors for Motion Capture the best option is to work in a space where the cast and crew feel welcomed. This creates an environment of trust where the actors are free to work at their full potential. At Mimic, Graham and his team are committed to provide exactly such a space for the director and the actors. I can’t wait to start production over there!”–Ismaël Auray, Cinematic director – Ubisoft, Activision, Gearbox Studio Quebec.