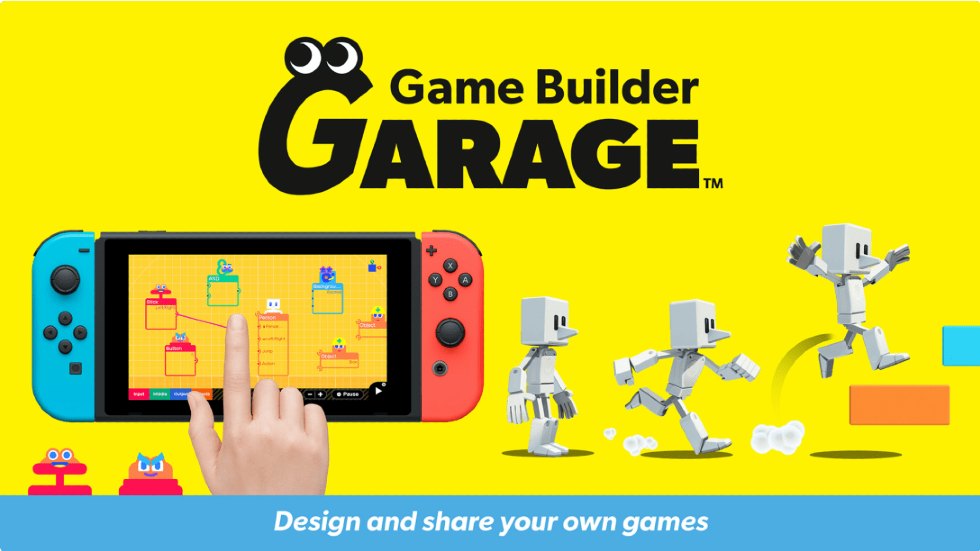 Nintendo announced Game Builder Garage, a new way to learn how to make and share your own video games. If you’re a fan of Nintendo Labo or Super Mario Maker, this is something you should keep an eye on as it seems to scratch that creation itch by the looks of the trailer.

Game Builder Garage uses a colourful approach to help children learn to code with “fun, guided lessons that cover the basics of visual game programming,” with Nintendo stating that no experience is necessary to begin learning the steps to making your own game. To code, you’ll interact with Nodon, the creatures shown in the video that help build the basic blocks of code.

Nodon are creatures with big personalities that are used to help build your games from the ground up. There are dozens of Nodon in Game Builder Garage, each with a unique function, and you can learn how to build games just by connecting them in various ways. For example, you can create and move a human-like character with an analog stick just by connecting Stick Nodon with Person Nodon! Thus, you will get to learn the basics of game programming in a fun and intuitive way. You’ll be able to create a wide variety of different types of video games too – from side-scrolling platformers, to kart racers, to space blasters!

When you first start playing Game Builder Garage, a Lesson Mode that introduces the Nodon who walk you through how to code with step-by-step interactive lessons with the ability to go at your own pace. If anything, this reminds me of how Sphero SPRK operated, with the app allowing kids to learn how to code basic functions for the robotic ball to perform.

There is also a Free Programming mode where you’re free to bring your ideas to life by using all the acquired skills to combine into a final product. And with on-the-fly play capabilities, you can code then jump right into your game to see how things are working and see if it plays. And you can even share and download games with friends over the internet if you’re ready to take on the world.

Game Builder Garage launches for Nintendo Switch on June 11 for $39.99.