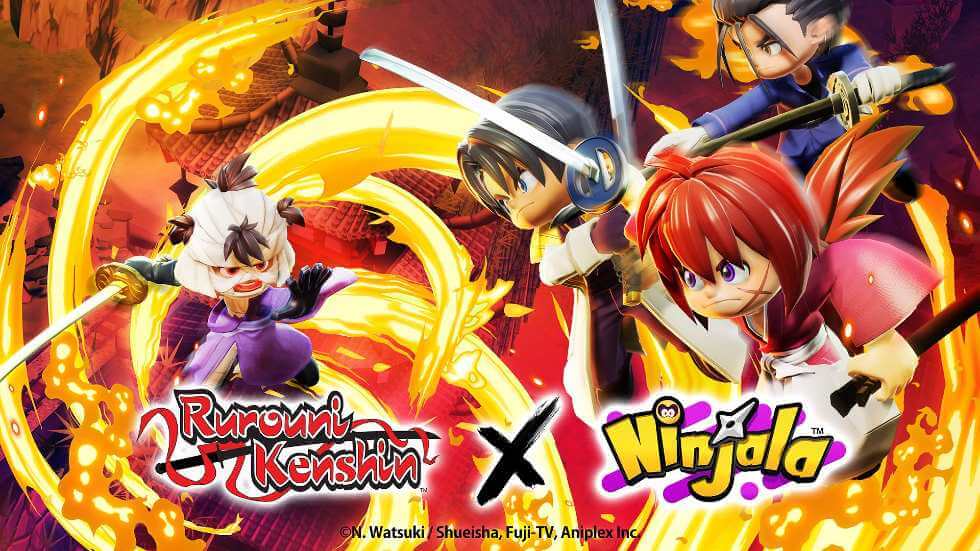 It’s been something of a big year for the little ninja game that could — otherwise known as Ninjala.

The free-to-play battle royal has just recently surpassed eight million downloads, and it’s even getting an anime adaptation!

So perhaps it could learn a couple of tricks from legendary samurai anime series Rurouni Kenshin — which it’s crossing over with starting today.

This collab [on through January 12th] has costumes, emotes, Gum Utsusemi, and more straight from the wandering samurai series’ Meiji era on offer.

There’s an exclusive show t-shirt available in the Shinobi Shop for 500 Jala. While you’re there, consider picking up the three-character costumes available for 2,000 Jala each. They are styled upon famous characters, Kenshin Himura,
Hajime Saito and Aoshi Shinomori. Sadly, in order to get the ultra-rare Makoto Shishio costume, you’ll have to play the Gumball Machine. On a positive note, by doing so, you could win one of the following Gum Skills: IPPON Gum (Kenshin), SK8 Gum (Sanosuke), Drill Gum (Hajime), Scroll Gum (Aoshi) and Shinobuzz Gum (Shishio). That last Gum is also available as part of the battle pass progression system, which will award players accordingly:

The legendary reverse blade katana is available with the Sakabato Bottle for 800 Jala. And once you have that, you’ll want some sweet emote sword skills! So pick up Amakakeru Ryu no Hirameki, Gatotsu and Kaguzuchi for 500 Jala a piece.

For the richer ninja, 800 Jala will get you one of these three rare Gum Utsusemi — helping you morph into your favourite Rurouni Kenshin swordsmen: Utsusemi! Kenshin Himura, Utsusemi! Sanosuke Sagara and Utsusemi! Sojiro Seta.