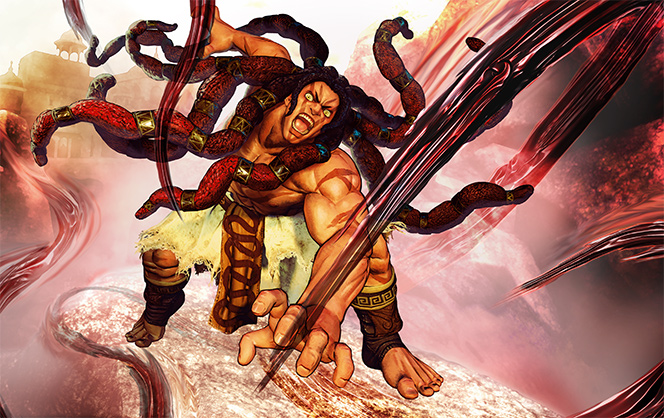 Announced at EVO 2015 in Las Vegas, Capcom confirmed the first brand new fighter to join the Street Fighter V roster – the mysterious Necalli!
Capcom also confirmed the details of the content plan for Street Fighter V. The initial game purchase will be the only disc or full game download you will ever need to own. For the first time ever, all post-launch gameplay related content will be earnable via gameplay, totally free of charge. Players will also have the option to purchase the content as soon as it’s available if they wish to do so. Any balance and system adjustments will be available for free also. Releasing in Spring 2016, the title will launch with a core roster of 16 characters, including 4 brand new fighters to the Street Fighter universe. Capcom will continually add additional characters, making this the first iteration in the franchise where it’s possible for dedicated players to continue to expand on their gameplay experience without the need to purchase further titles in the series.

About Necalli
Possessing a wide variety of savage and close range attacks, all of Necalli’s moves have been forged through the heat of battle to ensure he’s inflicting maximum pain upon his opponents.  Making full use of the Battle System mechanics, Necalli’s V-Skill allows him to pound the ground with both fists, creating an explosion that damages the enemy whereas the powerful V-Trigger allows him to channel a mysterious energy that changes his hair colour and alters his personality for a short period of time. Capcom will be revealing more information on Necalli’s origin and storyline in the coming months so stay tuned for more details.