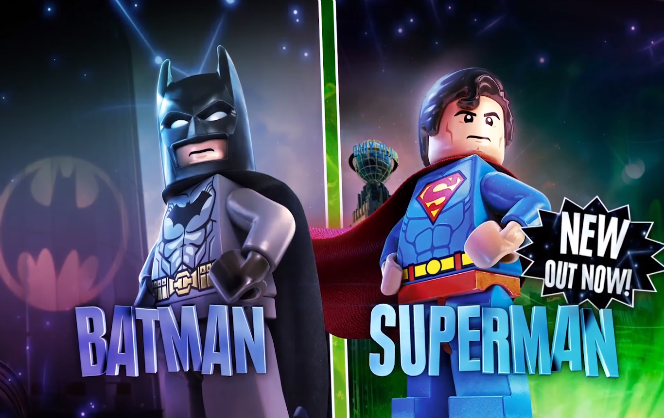 Warner Bros Interactive Entertainment has released a new trailer for the Batman vs Superman Expansion to LEGO Dimensions to commemorate the films release in theaters. Batman vs Superman: The Dawn will be the first time the two heroes will be in the same live-action film, and the theatrical live-action debut of Wonder Woman.

You can build and play with these iconic heroes and more in LEGO Dimensions. With the purchase of the Starter Pack, you’ll get a build-able Batman minifigure and 3-in-1 rebuildable Batmobile. You can also purchase additional DC Comics expansion packs to customize your gaming and building experience! These expansion packs include the DC Comics Team Pack and five unique Fun Packs, each providing build-able characters, rebuild-able vehicles, gadgets with special in-game abilities, and additional gameplay!

Bring the Man of Steel to life in the game with the DC Comics Superman Fun Pack, using his Flying, Dive, Invulnerability, Laser Deflector, Freeze Breath, X-Ray Vision, and Super strength abilities to solve puzzles and beat the bad guys. This Fun Pack comes with a build-able Superman minifigure and Hover Pod.

Gamers can take control of the King of the Seven Seas and use his special abilities such as Dive, Growth, Atlantis and Hazard Cleaner in the DC Comics Aquaman Fun Pack, including an Aquaman build-able minifigure and his Aqua Watercraft.

Things start to get a little ‘crazy’ in LEGO Dimensions with the DC Comics Team Pack featuring the mischievous couple, The Joker and Harley Quinn. Solve puzzles by using the Jokers Grappler, Target, Hazard, and Electricity abilities along with Harley Quinn’s Acrobatic and Super Strength. Players can use the Joker’s Chopper and Harley’s Quinn-mobile to do their bidding, and when they’re done with those, they can be rebuilt into the Mischievous Missile Blaster and the Jokers Lock ‘n Laser Jet; or the Quinn Ultra Racer and Missile Launcher for even more in-game abilities.

But wait, that’s not all. On May 10th, during Wave 5, players can purchase the DC Comics Bane Fun Pack which includes a build-able Bane minifigure, and his 3-in-1 Drill Driver that can be rebuilt into the Bane Dig ‘n Drill, and the Bane Drill ‘n Blast for additional abilities.

Check out the brick-tastic trailer here: