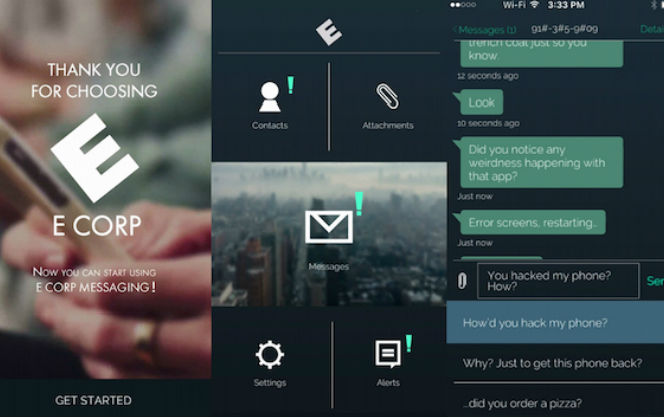 Mr. Robot:1.51exfiltratiOn Out Now For Android And iOS Leading and award-winning developer and publisher of digital entertainment Telltale Games, in association with NBCUniversal Brand Development, have released ‘Mr. Robot:1.51exfiltratiOn’ today for iOS and Android-based mobile devices. The game was developed by the acclaimed independent team at Night School Studio in collaboration with the creative team behind Universal Cable Productions (UCP) and USA Network’s Emmy-nominated series MR. ROBOT.
Mr. Robot:1.51exfiltratiOn extends the narrative experience of the award-winning TV series, allowing players to become personally intertwined with the characters of the underground hacker group, fsociety. Players will be using the mysterious new E Corp Messaging App over the course of a week, playing in real time, and carefully communicating with its members as they race to recover data that is critical to their goals of hacking the multinational company Evil Corp.

“We’re some of the biggest fans in the world of what Sam Esmail and the teams at Universal Cable Productions and USA have created with this series,” said Sean Krankel, co-founder of Night School Studio.”Working hand in hand with Sam, series writer Kor Adana and UCP, we’ve created an opportunity for players to meaningfully interact with characters like Elliot (Rami Malek), Darlene (Carly Chaikin) and Cisco(Michael Drayer), truly feeling like they’re joining the hack at a critical moment in the TV series. As fans, it’s nothing short of a dream come true for us.”
“Ever since MR. ROBOT burst onto the scene, fans have been looking for new ways to immerse themselves more deeply into its story and overall experience,” said Richard Rothstein, Executive Vice President, Current Programming, Universal Cable Productions. “This game does just that, giving players a chance to interact with the series characters on a journey only possible in the world of MR. ROBOT.”
“Night School Studio is one of the most promising small developers in the industry, and seeing Telltale alumnus and writer Adam Hines writing alongside the team at UCP and USA on an interactive story with our partners at NBCUniversal makes us proud to present this to MR. ROBOT and Telltale fans everywhere,” said Steve Allison, SVP, Publishing at Telltale Games. “There’s a distinct Telltale style to all of the character interactions that our fans will find familiar, and fans of the show will be engrossed all through the night as they race to help fsociety pull off the unthinkable.”

Mr. Robot:1.51exfiltratiOn is now available on Android and iOS.