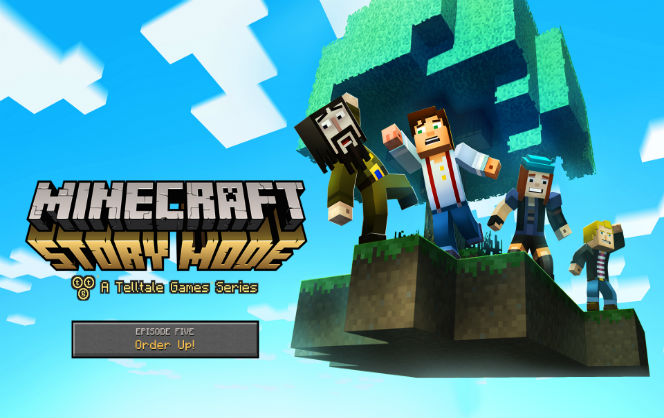 Fans of the episodic Minecraft game series don’t have to wait much longer as new episode five is being released on March 29th. Episode 5: Order Up continues the adventures of Jesse and the NEW Order of the Stone and is the first episode since the finale of the Withering Storm.

Also confirmed today, three additional episodes that will be released post-season later this year starring Jesse! These extra episodes follow the exciting adventures of Jesse and company as they traverse strange and distance lands much different then their own. The new episodes will be add-ons to this season of Minecraft: Story Mode, so you will have to own at least the first episode to be able to buy and play these.

Episode 5 has Jesse and the gang heading to an abandoned temple on a tip from Ivor about some mysterious treasures. They are then ambushed by Aiden, a former Ocelot, and his crew and taken to a new world: Sky City! They discover that Sky City resides above nothing but ‘The Void’ and that resources are at a Premium. Aiden convinces the Ruler of Sky City that Jesse and the Order of the Stone are up to no good leading to you having to make some difficult choices to clear your name and save an innocent world from Aiden’s destructive path.

Minecraft: Story Mode Episode 5 ‘Order Up’ will be released March 29th for PC/Mac, Xbox One, Xbox 360, PlayStation 4, PlayStation 3, and iOS and Android.