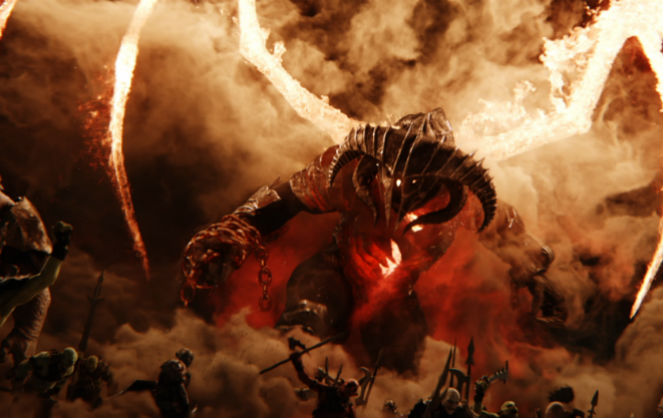 The epic sequel to 2013’s Middle-earth: Shadow of Mordor is out now! The game is available for the Xbox One, PlayStation 4, PlayStation 4 Pro, Windows 10 PC, and Steam with Xbox One X enhancements coming November 7th. Shadow of War will build upon the existing Nemesis system, adding improvements and more features that are honestly pretty impressive and allows players to create a personal and unique playthrough everytime.

Middle-earth: Shadow of War continues the original narrative of Middle-earth: Shadow of Mordor, winner of more than 50 industry awards, with the return of Talion and Celebrimbor, known as the Bright Lord, who must forge a new Ring of Power and confront the deadliest of enemies, including Sauron and his Nazgûl, in a monumental battle for Middle-earth. This open world action role-playing game (RPG) is fueled by the Nemesis System, which now introduces Orc Followers who bring about entirely new stories of loyalty, betrayal and revenge, as well as the addition of massive Nemesis Fortresses, which require different strategies to conquer dynamic strongholds and create personalized worlds with more choices and opportunities than ever before.

“We worked incredibly hard to massively expand Middle-earth: Shadow of War in every dimension, including the open world, the story, the RPG systems, the core gameplay and of course the personal player stories created through the expanded Nemesis System,” said Michael de Plater, Vice President, Creative, Monolith Productions. “As lifelong fans of all things Middle-earth, we are so grateful to have the privilege to bring to life the most incredible fantasy world ever, reimagined in a fresh way for fans and newcomers. We can’t wait to see the amazing stories players are going to create and share once they experience all that Middle-earth: Shadow of War has to offer.”

Players can experience the vast open world in a host of ways to create unique personal stories. With new and improved melee, stealth and ranged combat, expanded skills and the new Ring of Power, gamers can harness the power of the Bright Lord to dominate Mordor from within. Players will encounter new and familiar allies in their quest, including Eltariel, the elite Nazgûl hunter; Baranor, the Captain of Minas Ithil; Carnán, the mysterious spirit of nature and iconic characters such as Shelob and Gollum. Alongside these allies they will face an incredible diversity of deadly foes, including Orcs, Olog-hai, monstrous beasts, the ancient Balrog Tar Goroth, fire breathing drakes, the Nazgûl and ultimately the Dark Lord, Sauron himself.

Set between the events of The Hobbit and The Lord of the Rings, Middle-earth: Shadow of War features a rich ecosystem of missions, exploration and a robust Orc society with diverse Orc cultures. Orcs enemies now belong to tribes, which extend their influence stemming from the Overlords ruling the mighty fortresses spread throughout the distinctive environments. Through Orc Followers and Nemesis Fortresses, players now have entirely new ways to experience the world, due to the choices and opportunities provided by the expanded Nemesis System. Whether spared, scarred, recruited or shamed, every Orc encounter will be remembered and help fuel the dynamics of society and conflict within Mordor, all brought to life by the innovative Nemesis System.

Middle-earth: Shadow of War is available now in a variety of different options. The Standard edition has a price tag of $79.99 and comes with the game. There’s also the Silver Edition ($99.99), Gold Edition ($129.99), and the Mithril Edition ($399.99). The Silver and Gold editions come with some extra DLC and War Chests, while the Gold will come with an exclusive Steel-book. The Mithril Edition is where the fun’s at. With the Mithril Edition you gain access to Slaughter Tribe Nemesis Expansion, Outlaw Tribe Nemesis Expansion, The Blade of Galadriel Story Expansion, The Desolation of Mordor Story Expansion as well as some physical treasures such as a limited edition 15 inch Tar-Goroth Balrog vs. Carnán Drake statue, collection of original lithographs, premium case with magnetic Ring, exclusive SteelBook, official game music soundtrack, cloth map of Mordor, Gold War Chest, Mithril War Chest and of course, the main game.