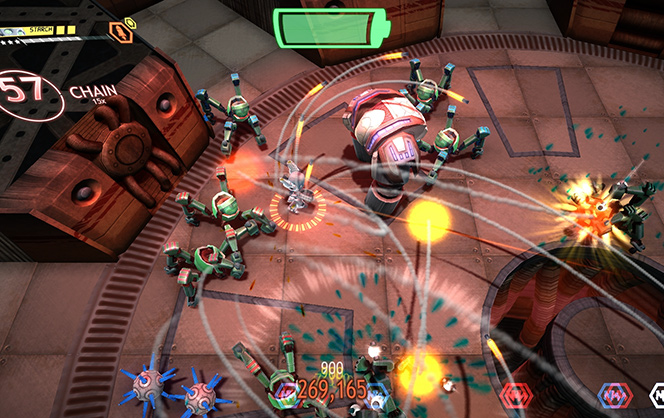 When Witch Beam releases their arcade style twin-stick shooter Assault Android Cactus this summer for PlayStation 4 and PC, then later for Wii U and PS Vita, they will include ex options to change up gameplay, one of which adds immensely powerful Mega Weapons.
Android Assault Cactus has recently received many accolades including the International Award at Bit Summit 2015 and being named one of The PAX 10. The new highly destructive Mega Weapons will be playable for the first time at PAX Prime 2015 in booth 6203 on the 6th floor. Set in a vivid sci-fi universe Assault Android Cactus has eight playable characters, all female androids, each with their own unique primary and secondary weapons. With Mega Weapons enabled, each android swaps her secondary armament for an over-the-top version of their primary weapon, giving each character a new way to play. Though the Mega Weapons are based on the original primary guns, their extreme capabilities provide a huge advantage.
The title hero Cactus, whose primary weapon is an Assault Rifle, swaps out her Flamethrower for the Mega Assault Rifle able to pummel robots from across the screen while Starch substitutes her Micro Missile Launcher for the Mega Laser, capable of disintegrating enemies in an intense burst of energy.
“Each heroine already boasts her own gameplay style, but Mega Weapons changes it up again, giving our characters a new way to obliterate their robot opponents,” Sanatana Mishra, designer, Witch Beam, explains. “We could not wait until launch to see players’ reaction to the Mega Weapons so we are going to preview them for fans at PAX.”
Other ex options include a first-person camera, music and visual filters, HUD removal, adding A.I. partners so a single-player can experience four-player local cooperative gameplay and an option to increase the number of adversaries in single player to the same amount of enemies appearing in local co-op.
All ex options can be unlocked through gameplay. The Mega Weapons and additional ex options will be available at the game’s release. Ex options including the first-person camera, visual filters, HUD removal and A.I. partners are currently accessible in Early Access.
Assault Android Cactus is in Early Access and available now on Steam for Windows, Mac and Linux for $14.99 USD.