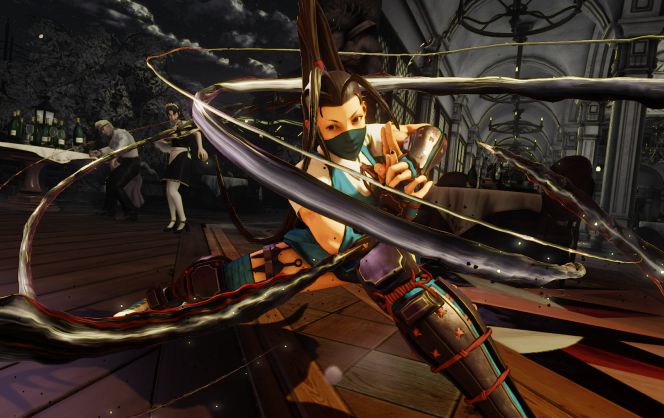 Ibuki will be the next character to come as DLC for Street Fighter V. Over on the Capcom Unity blog, the team has dived into her a bit more and the veteran from Street Fighter 3 will return with new skills.

We’re happy to announce that Ibuki — everyone’s favorite kunoichi — is making her return in Street Fighter V! She has always been a very tricky, technical character so players who are looking for a challenge won’t be disappointed as she comes  with loads of new ninjutsu tricks up her sleeve to keep her opponent guessing at all times. Hit the jump for more details on our latest DLC character!

Ibuki has been trained in the deadly art of ninjutsu from an early age in a village located in the mountains of Japan and is often seen with her pet tanuki, Don and her best friend Sarai Kurosawa. She is constantly tasked with difficult missions and rigorous training and dreams of one day finishing her ninja exams, leaving all this behind to live a life of a normal schoolgirl.

buki has always been a very mobile character with various target combos, but she now has even more ways to mix-up the opponent with the ability to glide through the air and toss out ninja bombs, making it very difficult to predict where she will land and where her next attack will come from.

Kunais have also been a cornerstone of her playstyle, but now players will have to be much more strategic in their use as she can only stock five at a time before she has to quickly obtain another set. That said, their utility is just as powerful as ever as she can send her entire stock flying at the opponent for serious damage.

Ibuki builds up energy and blasts it from her palm towards the opponent. The blast range is dependent on how long Tenrai is charged for.

Ibuki digs into her bag of ninja tools and throws a bomb at the opponent. Depending on which direction is held upon activation, the bomb can either go off quickly, after a slight delay or after a longer delay. Ibuki is extremely crafty and impatient, however, so there might be other ways to trigger the explosion.

The pinnacle of Ibuki’s ninjutsu training! Ibuki launches the opponent into the air, quickly following after them. She then performs a series of ninjutsu seals, culminating in a large scale blast to the opponent’s skull.