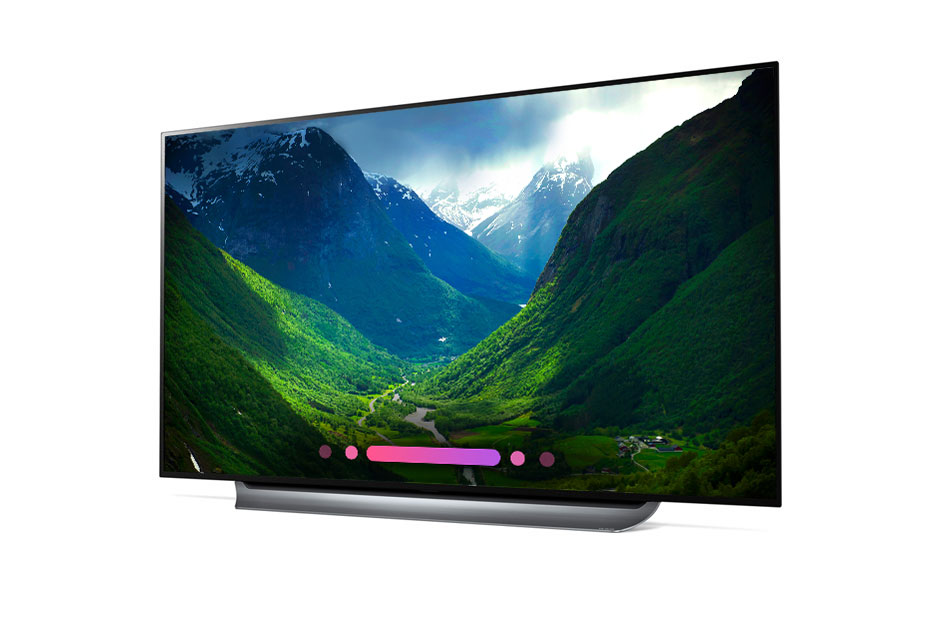 (Product was provided by LG Canada for review)

LG’s new C8 OLED is a wonder of current television sets. Each year, LG releases a new entry to the C-series that captures stunning visuals for a affordable price. The C8 is no different. Add in the stunning design and the quality of life features, and the C8 is undoubtedly a winner. This review will be referencing the 55” C8 (LG OLED55C8PLA) although it is important to keep in mind that the C8 model comes in a addition two sizes –– 65” and 77”. However, given the almost non-existent bezel, the 55’’ was a very comfortable size for both watching Netflix and playing console games.

Straight of out the box, I was amazed at how thin the C8 screen was. Roughly half the unit housed all the components and power, while the top half was thinner than a pencil. All-in-all the screen amounts to roughly 6cm in thickness.

An impressive, yet fragile piece of tech deserves a proper stand to sit on. The C8 comes with a stylish metal stand that easily screws into the back of the unit. The metal stand curves forward and even sports a small white stamp “LG OLED” on the bottom, just for show.

The back of the C8 has a small well which houses most of the input ports. One HDMI port, two USB 3.0 ports, ethernet, and Optical Digital port. The remaining three HDMI and one USB 3.0 ports are close by on the left side of the device. While the back of my entertainment center is a bit of a jungle, the screen does do a good job of hiding the chaos.

Aside from the television itself, the C8 comes with LG’s Magic Remote. The Magic Remote can be used as a traditional remote with its directional pad, or scroll wheel. However, the real “magic” comes from it’s gyroscopic use. Almost like a reimagined Wiimote, going through menus and setting was a breeze with the easy-to-use functionality.

Most notably, the Magic Remote also sports a designated Netflix quick select button. Aside from the quick select, the C8 also has a wide variety of apps to select from. Powered by the Google Play store, streaming services such as Amazon Video and Cravetv can be easily added to the quick bar.

Speaking on the quick bar, selection and customization is access with relative ease. Placing connected devices such as blu-ray players and gaming consoles was simple. The C8 is all backed by the webOS 4.0, which by now should be the standard of all Smart TV sets.

Other companies have attempted to replicate the interface with their own offerings, however the webOS 4.0 is by far the most intuitive of the bunch. Plus, you can pair the voice activated AI ThinQ tech built into the C8 with Alexa devices and Google Assistant.

After the quick setup of WiFi, and other standard first steps, it is quite obvious the C8 is one of the most stunning units on the market. I believe the pairing of the C8 and a 4K enabled Netflix account was a match made in heaven. One of the most impressive feat is the range of colour. Any pop of colour is crisp and vibrant. Even during the daytime with direct sunlight coming through, the C8 can combat glare and provide a beautiful range. Even next to the darkest of blacks, colour is painted on the screen without any bleeding effect. The range of darks and blacks is also a sight to be seen. Quite often small details get lost during dark scenes of film and television. The C8 upholds the quality designed for these pieces by being able to balance the two without being too saturated or too loud.

While watching the UHD version of Avengers: Infinity War, the contrast of colours and vividness were at their peak. At no point did any image falter due to tearing or clipping (TruMotion was turned off). Even for non-4K content, the C8 does a wonderful job of upscaling the picture.

This is primarily attributed to LG’s A9 processor, which has now become standard across all of their current models. The A9 elevates the entire picture through and through, even without the need of customizing the settings.

*I believe it is important to note that the a portion of the review period was spent on console gaming.

That being said, I did take some time to fine-tune the advanced settings. As I mentioned earlier, the C8 sat in a room affected by direct sunlight. To improve picture quality, I calibrated the OLED luminescence accordingly.

Since a great deal of my time would be spent using the Xbox One X and desired the HDR capabilities, it is required to select ‘HDMI Ultra HD Deep Colour’ for the appropriate input. In addition, selecting ‘Technicolour Expert’ picture mode is essential to get the full experience.

While the C8 provides a designated ‘Game Mode’ for low-latency, I preferred to stick with the above settings in exchange for a possible higher latency –– which was barely noticeable to begin with.

For the audiophiles out there, the C8 comes with Dolby Atmos enabled. Obviously, without a fully dedicated Dolby Atmos soundbar or theater system, some of the audio get abandoned. However, due to the speaker placement, audio is able to reverberate and provide a decent soundscape with varying degrees depending on room size.

A neat little addition is ‘Gallery Mode’ which acts as the C8’s screensaver. When not in direct use, the C8 will default to beautiful stills and works of art. LG has stated that the Gallery Mode will often rotate and bring in new visuals. While my unit sat on my entertainment center, Gallery Mode will truly shine if mounted on a wall.

When all is said and done, LG’s C8 is a punchy, yet elegant model for any living room. Between the sleek design, and the powerful internal guts, there rarely comes a television that checks off all the boxes the way that LG has managed to.

While this may not be the easiest pill to swallow, considering the above, the $2500 price tag on the smallest model is not egregious. Most high-performance televisions comes within the $2000-$3000 CAD range, yet with come short of one or two features in some capacity.

If you are in the market for the next best screen to house your blockbuster film experience, or want to experience 4K gaming in its truest form, I believe the investment in the C8 is a sound purchase.