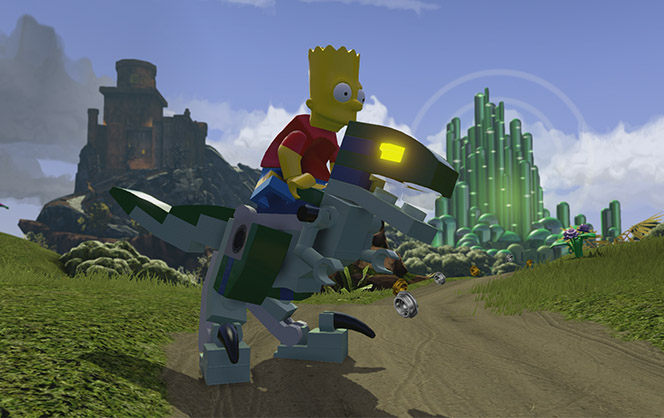 While both levels are available in the starter pack, the Simpsons level is done in a unique cel-shade style, which will look unlike any of the other levels in the game. Players will be able to face off against an unlikely duo of evil villains in the Simpsons level; the Joker (LEGO Batman) and Lord Business (the LEGO Movie), who have joined forces with Lord Vortech’s legion of villains to invade the poor city of Springfield. The players will have to save the day with the help of their Simpsons heroes; Homer from the Simpsons Level Pack, and Bart and Krusty the Clown from the Simpsons Fun Packs, all who have been announced as minifigures. In the Midway Arcade level, players will side with Batman, Wyldstyle and Gandalf as they find themselves trapped within a video game! They will have to fight waves of enemies from Gauntlet, race in Super Sprint, battle robots from Robotron and save the astronauts in Defender! The Midway Arcade level pack will also be including a LEGO Retro Gamer minifigure, as well as an entire level with more than 20 arcade games to play! The best part of LEGO Dimensions is that any of the characters and vehicles, from any of the packs, can all be combined and played with throughout the entire game! And with worlds including those of Doctor Who, Back to the Future, Ghostbusters and Portal (to name a few) added to that combination, our wallets and lives are all doomed…!

LEGO Dimensions will be available September 27th for the Xbox One, Xbox 360, PlayStation 4, PlayStation 3 and the WiiU!