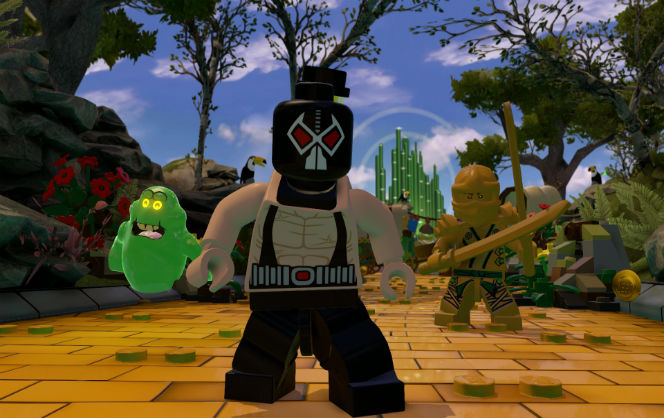 With the purchase of these Fun Packs, players can create even more gaming and building adventures with buildable characters, rebuildable 3-in-1 vehicles, and gadgets with special in-game abilities. All packs give the player the ability to use everything interchangeably, anywhere in the game! Additionally, each expansion character can unlock the Adventure World of that same brand to provide players with additional gameplay content based on that property.

Fans of DC Comics will be happy to learn that they can get even more out of LEGO Dimensions with the buildable Bane Fun Pack. Place the buildable villain on the Toy Pad to bring him to life in the game. Use Bane’s abilities such as Hazard Protection, Big Transform, or Super Stealth to solve patterns and overpower enemies. Bane’s 3-in-1 Drill Driver can be rebuilt into the Bane Dig ‘n Drill and the Bane Drill ‘n Blast to boost gameplay with upgraded in-game abilities.

The Ghostbusters Slimer Fun Pack is perfect or players who just want to slime their enemies. The glutinous ghost can use his Hot Dog firing abilities and activate his Boomerang, Sonar Smash, Flying, Dive, Hazard Clean, Illumination, Mini Access and Hazard Protection abilities to solve puzzles and fight badies. For additional help, players can use the Slime Shooter which rebuilds into a Slime Exploder and Slime Streamer for upgraded in-game powers.

The LEGO Ninjago Lloyd Fun Pack features a buildable Lloyd minifigure with two Golden Katanas and a rebuildable 3-in-1 Golden Dragon. Players can use his two Golden Katanas to activate his special Spinjitzu, Illumination, Acrobat, Laser Deflector and Stealth abilities to solve puzzles and fight enemies like a true Ninja! Lloyd’s Golden Dragon can be rebuilt into a Sword Projector Dragon and Mega Flight Dragon for enhanced in-game powers.