The Legend of Zelda: Tears of the Kingdom Trailers Offer Clues We’ve Missed

;Finally, the sequel to Breath Of The Wild finally has a name and it is The Legend of Zelda: Tears of the Kingdom!

The brand new trailer for the sequel to Breath of the Wild was unveiled this week, revealing the new name of the long-awaited but delayed game along with its release date, which is scheduled for May 12, 2023. While many people complain that they haven’t seen anything in this new teaser, I’m not so sure about that as the team has revealed a lot without showing us.

First, we could see that Link is able to jump on the back of a kind of mechanical bird which acts like a vehicle that seems to bind Hyrule and multiple floating islands.

If you take a closer look at all the trailers that have been unveiled for the game up until now, we could begin to piece together what’s happening or rather, what will happen.

We could see this kind of green ethereal stream emanating from some source trying to contain Ganon’s corpse, in the form of a hand with glyphs on which we can read, if you translate it, “Seal of Ganon”, as well as his dark aura, Malice, under Hyrule Castle. We also got to see Link’s infamous odd arm after the green ethereal flow merged into it. Subsequently, we also saw Link who could, through these strange green ethereal streams, go up to the floating islands and continue to use his paraglider, which necessarily implies that the vehicle unveiled in the last trailer has great significance between Hyrule and the sky world. Let’s not forget, either, that we saw the legendary sword, the Master Sword, which looked broken and corrupted, even having some glyph appearance. Incidentally, the look of these glyphs also carries over to the new trailer as we see similar designs on a temple wall where we see a hero, a horde of enemies, a sleeping princess and more, hinting that this is something that had been foretold by the Oracles of the past. We can also see there a kind of dog-headed entity with seven symbols that look like stones floating around it, probably suggesting that we will have to collect seven crystals which will be, I imagine, in seven large dungeons.

If we continue to dig deeper, we can see these same glyphs, green in colour, on the ground in places where the ground seems to have flown away or slipped away. Probably what makes, at times, the ethereal connection between the floating islands and the earth, famous passages through which Link can pass to go up on the mysterious islands.

Here’s how I think we’ll begin this adventure 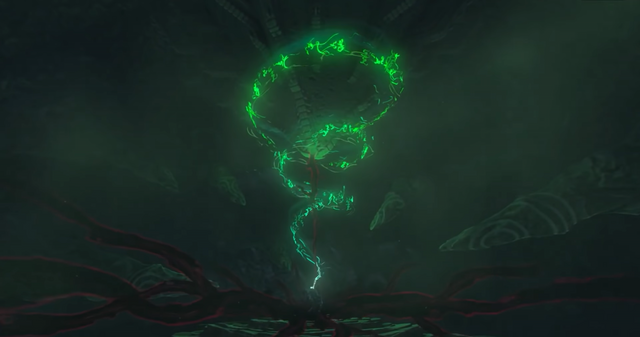 The magic hand created by the Zonai, which is the barbarian tribe that disappeared centuries ago, has been able to seal the sorcerer Ganondorf for millennia with Sheikah energy. That said, the vile energy of the sorcerer was able to create the Calamity Ganon after 10,000 years and was able to control the Sheikah technology at the same time. 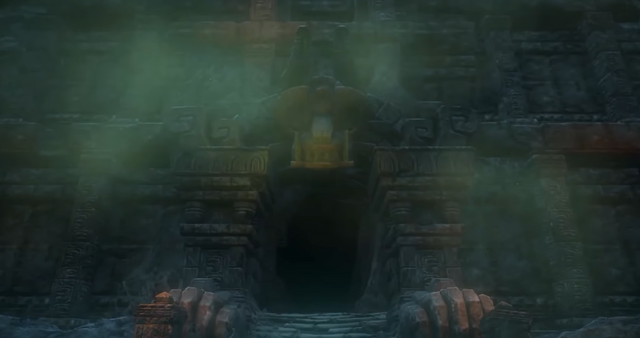 When Zelda and Link delve into the basements of Hyrule Castle to find the ultimate source of the Calamity inside a temple bearing the image of a strange horned boar, that’s when they found the emprisoned body of the sorcerer. In a final attempt for vengeance, Ganondorf shook the ground which collapsed under the feet of the Princess and the Hero. 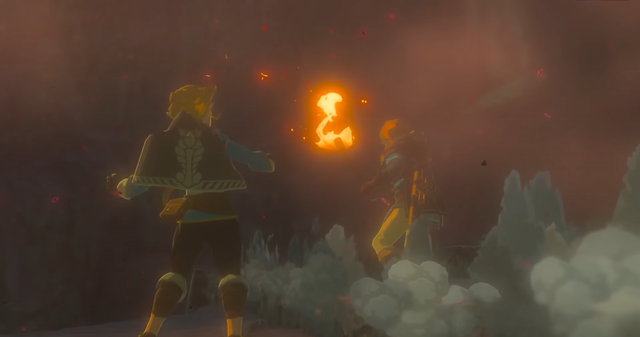 It was then that the magic hand grabbed Link by the arm to prevent him from sinking into darkness, freeing the wizard and his ultimate energy. It was at that precise moment that the magic hand merged with Link’s arm in order to protect him and grant him its powers so that he could seal Ganondorf’s power again. 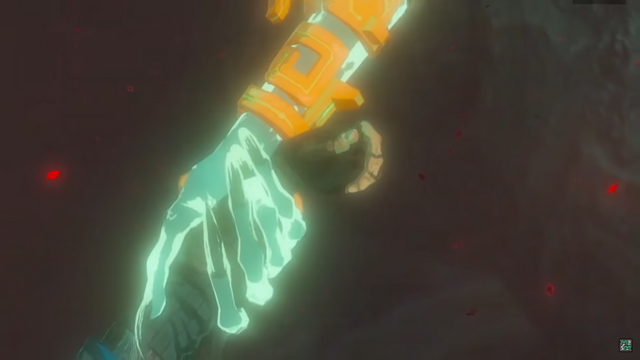 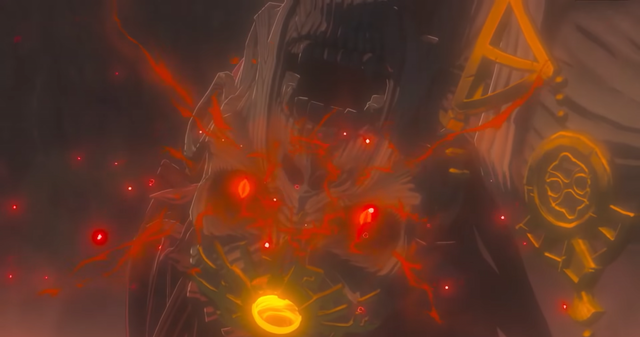 Ganondorf finally wakes up, free from the seal 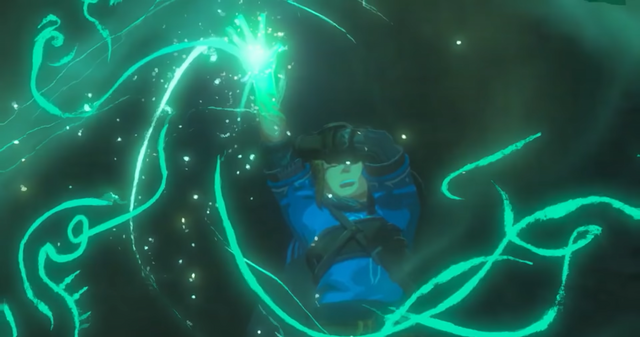 The Hand merges with Link

Islands began to fly away as in the past, seen here in the story of Skyward Sword, in order to protect the inhabitants of Hyrule from the darkness and the plague that prowls the surface of Hyrule, destroying everything in its path.

All this means one thing: the very first trailer, the one where we see Zelda and Link sinking into the basement, is not in the right order and has several different sequences.

So here’s what I believe the video footage for the first trailer looks like, once the whole puzzle is put back together:

So, basically, what’s in for longtime fans?

As you may know, Princess Zelda is the reincarnation of Goddess Hylia. Every single time, Ganondorf wishes to get a hold of her powers to get access to the sanctuary in which is hidden the Triforce and has tried several times to kill the princess, seeking revenge on the royal family. If you don’t remember, in The Legend of Zelda: Ocarina of Time, when he uses his last ounce of energy to make the tower collapse, which led Link to escape with her.

As Zelda falls to near death, Link tries to grab her arm to rescue her. So I believe the hand decided to break the spell to rescue the reincarnated goddess and, so to speak, her champion.

I am presuming that this new adventure will be related to all of these fabulous tales from Legend of Zelda, including:

Do the Sages exist in all Zelda games?

Most likely! In the very first game, The Legend of Zelda, it was the Sages who gave Link his multiple swords.

In The Adventure of Link, it is a Sage that summons Link’s Shadow out of Link’s body, handing him the Triforce of Courage when he defeats his dark counterpart.

In A Link To The Past, it is mentioned that the Seven Sages joined forces with the Knights of Hyrule to seal Ganon in the Sacred Realm.

In Ocarina of Time, Rauru reveals that the original Sages were the ones who built the Temple of Time to protect the Triforce and that the Sages we save in every dungeon are their descendants.

In Wind Waker, the already known Seven Sages team up with other Sages who are responsible for the Master Sword.

In Four Swords Adventures, the Shrine Maidens, which are similar to the Sages, were responsible for keeping the powers dormant in the Four Sword Sanctuary under control.

In Twilight Princess, the Sages reside in the Mirror Chamber in Arbiter’s Grounds and appear as ethereal forms of old men but, actually, are ethereal faceless ghosts wearing masks.

In Phantom Hourglass, there was this graveyard on the Isle of Ruins where nine Sages were laid to rest. Six of the Sages’ gravestones contain sets of directions to be able to leave Brant’s Tomb.

Although they did not appear physically in Skyward Sword, the symbols of each Sage are etched into the entrance dome of the Sealed Temple.