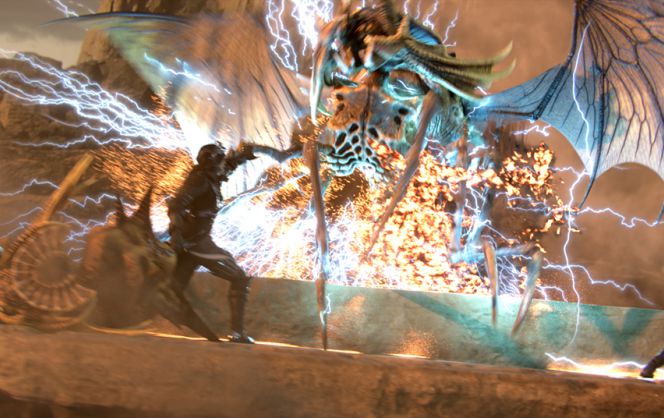 This is all from the official Final Fantasy XV so thank you to the members there for translating the new information.

Nyx Ulric
He is a member of the elite force known as the “Kingsglaive” which is under the direct control of the king. Who is also the main protagonist of the movie ‘Kingsglaive’.
During his younger days, when he was swallowed into war, King Regis had taken him in under his arms and now feels forever grateful of his King. He has a strong affinity with the magical powers of the Royal Lucis Family and has exceptional fighting abilities. For this reason, he is a crucial core member of the Kingsglaive group.

Kingsglaive FFXV shares the same world and characters with FFXV and is a full CGI movie. The story takes place in Insomnia, the capital of Lucis, after the main character of FFXV Noctis set out on his journey. As a violent war with the Niflheim Empire breaks out, the ones to face the full brunt of this battle is the group called ‘Kingsglaive’.

Drautos
Drautos is a General Commander of the Lucis military who commands as the Leader manages the Kingsglaive special force. He holds those who shows great efforts in high regards and is very strict towards others and himself. He also the one who trained Nyx in combat.

Tenebrae, a place where a hostile relationship continues under the control of the Nifelheim Empire. Why are the members of Kingsglaive mingling in such a dangerous place…?

What is the mission tasked to the Kingsglaive elite force?

Elite Force
Kingsglaive is blessed by the powers of the Crystal and the Royal Lucis Family, and uses it’s powers of magic as an advantage in war.This Elite Force is the pride of the Lucis Kingdom. The members of the group lead by Drautos, are equipped with communication devices in their right ears which they use to communicate and receive orders.
The core of the group is comprised by immigrants and though there are those who think ill of this concept, they are all very loyal and take pride in carrying out various missions of importance.

Crowe preparing to conjure powerful magics along with other practitioners. This scene serves as the symbol of Lucis known as the Kingdom of Magic.

Luche Lazarus
A cool, calm and collected character, he is highly respected by the other members of the group and is recognized as the Leader of Kingsglaive.
*Note that Drautos is more like a overseeing Commander of Kingsglaive while Luche acts as the Leader*
Luche respects and acknowledges Nyx’s abilites and royalty and Nyx appears to be his go to man to command missions.

Perhaps Lucis no longer has the power to fight back the Niflheim Empire? In the midst of Luche’s doubts, the members of Kingsglaive has opinions to each of their own.

Libertus Ostium
Libertus is a member of Kingsglaive who is also from the same town as Nyx. He is always cheerful and is the mood-maker of the group, but regardless he has a strong sense of responsibility. He has a emotional and stubborn side to him and there is also a scene where he expresses strong dissatisfaction towards the Kings decisions.

Libertus has a good relationship with Nyx to the point they could be considered as best friends. *Starting to like this cuddly bear lol* His carefree attitude becomes support for the Kinglaive group who are given lot’s of dangerous missions.

Lucis who hold the crystal has had a long conflicting relationship with the Nifelheim Empire who seeks to obtain said crystal. But the equilibrium that holds the balance is destroyed as a result of the peace treaty summit. Under the feign as a Peace Treaty, the Empire demands the abandoning and relinquishment of Prince Nocts political marriage and the lands of Lucis with the exception of the Capital and Lucis makes the decision to accept the terms. But on the day of the Peace Treaty Summit, the capital of Lucis – Insomnia is invaded. In this epic tale, the truth behind the invasion will be unraveled.

Lunafreya (Lunafrena) Nox Fleuret
She is the Princess of Tenebrae – a controlled province under the Nifelheim Empire. Communicating with Gods, she takes the role as a divine Oracle who cleanses the world and is high revered and loved by people all around the world. The times and memories that she had shared with Noctis during their childhood is very important to her.

Why is Lunafreya in Insomnia and not in Altissia? What does Nyx and the Kingsglaives hope to achieve with their meeting with her?

The Kingdom shakes as the Divine Oracle visits.

Lunafreya – the Princess of Tenebrae was to wed Noctis as proof of Peace between Lucis and Nifelheim. The wedding ceremony was to be held at the Ocean Capital Altissia, but for some reason she is in Insomnia tangled between the war with Lucis and the Empire.

In the movie there is also a scene where the Kingsglaives freely use magic during a violent battle. It is not just a fight with the Empire troops, but there also appears to be an entry of a very familiar monster from the FF series…
What are Nyx and Lunafreya witnessing during the ongoing violent battle for Lucis?

The Kingsglaive utilize teleporting abilities known as ‘Shift’ and barrier obstruction magic. The monster in the midst of the battle appears to be a “Ahriman”.