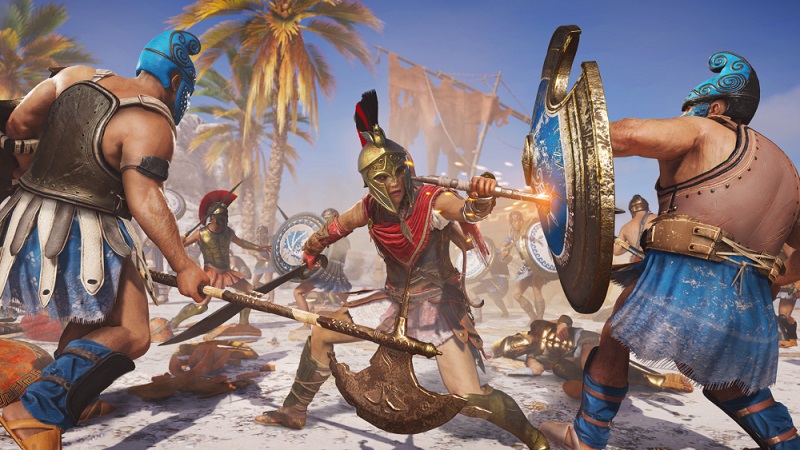 We were also able to sit down with Melissa MacCoubrey, Narrative Director for Assassin’s Creed Odyssey, and talk about the process of bringing the Odyssey to life.

Dave – How important was it to give players the choice to act upon every situation and how those choices would impact the overall story?

Incorporating choice was something we always wanted to do into the narrative. I feel like we came off Syndicate and said, how cool would it be to have a conversation with these people. In terms of the overall story we wanted to make sure the choices that you were making were in line with who you were playing as a character and that they fit the context of the game, the experience, and themes that we were following. We wanted to make sure those choices feel natural and very a part of the story. We weren’t going to be making a million choices off the bat where you get lost and the story doesn’t make any sense because it’s too big and hard to handle. We never had branching endings before so for us it’s a big deal. It has been very inspiring and a treat for us to look at the family storyline, as there are several possible storylines to achieve, and how your choices impacts those themes and how it impacts the messages we are looking to explore in the story.

Dave – You have the main storyline, but as you explore you discover every island has its own story to tell. As the player travels there is always something new and exciting. How important was it to let the player travel where they wanted, but at the same time keep them enthralled in the experience?

It is immensely important and very difficult due to it being a vast game. We were making a game that has choice, but it very much dependent upon exploration. We want people to see the world we built and to explore Greece to its fullest, so it meant making stories around the world that would pull you in so you would be encouraged to go out there and meet all these different people and figure out what their deal is because some people were crazy. It has been really exciting as I work with a really big team of writers that exist around the world and they all have amazing and unique stories to tell from their different writing and cultural backgrounds. Looking at all the inspiration of the works of the time such as the different plays, myths, histories, and how can we incorporate these in new and exciting ways that will draw the player in and make them excited. Bobby – With every new iteration there is more lore established, how do you make sure you do not conflict with the old stuff while adding new material?

It’s insane because like wait, Churchil was a Templar, but Hitler was too? You have moments when you think, somebody said that once. The fans keep the best wiki ever, which allows us to make sure that we are not stepping on other people’s toes. It also lets us look at what exists in our time period as well and how we can nod to that, or not engage with that and why. We also have to be conscious when we add new lore to it because the next people will have even more to navigate. It really depends on what time period the game is set upon as well. It’s a challenge and very exciting as we are always trying to push the lore in new and exciting ways and how can the lore, that has already been established, really benefit us and help us with the world we are building and make it richer. We are very lucky to have as much lore as we need.

Dave – I know you had an on-site Historian, but did you and your team branch out and tackle reading different historical texts?

Oh for sure. We have to because our Historian has to provide information to the team as a whole, which is a lot. So it definitely means we have to do a ton of our own research and we have been since day one as well trying to find out what we can reading historical texts, plays, Homer’s Iliad and Odyssey, the crazy myths where the gods did insane things, and working on how we can integrate those into the stories that we are creating in a way that made sense culturally, but also were interesting from a storytelling perspective as well while dropping little hints to ask people if they knew what we are talking about because a lot of people know these stories, or versions of them.

Dave – I really enjoyed how after the tutorial it started off with talking about Odysseus in Homer’s Odyssey. You chose the term Odyssey to represent the title for this Assassin’s Creed release, is that something you knew would take place from the beginning and how you would touch base and compare our hero’s Odyssey with Odysseus’?

I think because we are making an open world RPG in Greece that The Odyssey was very inspiring in terms of how we paced the game as well because the epic is very interesting with regards to pacing and the hero’s journey. We kind of made a melting pot of all of the different historical influences of the time including the comedies, tragedies, epics, and the myths all being poured into a pot and see how those formulas can work for us because we are making an interactive experience. Yes The Odyssey very much inspired that, but I think it was important for us to pull from all the other sources too especially in regards to the wide variety of tone of the game, which we wanted to reflect as much of that Greek culture as we possibly could.