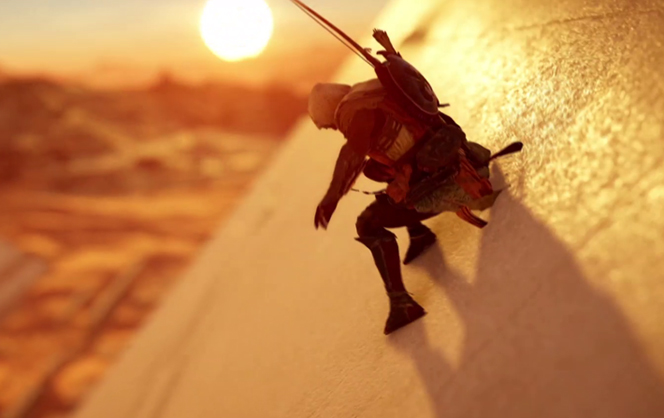 While at Fan Expo Canada this past weekend we were able to play a lot of cool games, one of which being Assassins Creed Origins. We have a ‘First Impressions’ article up that you can check out right here. Luckily enough we also had the chance to chill out and talk to one of the dev’s behind the game, Vincent Cotineau-Soufflet. We were able to talk about some cool stuff regarding the new game and some behind the scenes tidbits so check it out below!

Console Creatures: From what we’ve seen it looks like Assassins Creed Origins has undergone a bit of a genre change, with the leveling up and the skill points and the gear. Is this more of a permanent format you were thinking for the game or is it just something you’re trying out with this one?

Vincent Cotineau-Soufflet: It’s something we’re trying out, more of an RPG style. We’ll see whe the feedback from the players says when the game comes out.

CC: So you took a year off in between releasing Assassins Creed Syndicate and Assassins Creed Origins. Do you feel like that gave you enough time to get a more finished product out or do you think you could have used more time?

VCS: This is a really hard question to answer, because the of the work cycle, we started this about four years ago so we were able to get one more year to work on it but we felt like this was really good for the game and for the people working on the game.

CC: So the extra year will be reflected in the game compared to previous ones?

VCS: Yea for sure.

CC: Since Assassins Creed Syndicate was released, there were a lot of polls and stuff online theorizing where the next one would take place with a lot of people saying Japan and a lot of people speculating a return to America. So that has us wondering, why Egypt?

VCS: Egypt is really just a great environment and everything. When they decided to choose Egypt they wanted someplace exotic. The team who worked on Origins is the same team who worked on Assassins Creed Black Flag, same direction team, so basically they wanted water. I don’t know why exactly they picked Egypt, but I know it’s something the players wanted for a while like when we were working on Unity and Syndicate, people were already working on this game. It’s really one of the best places and it’s where everything that has to do with the assassins begins.