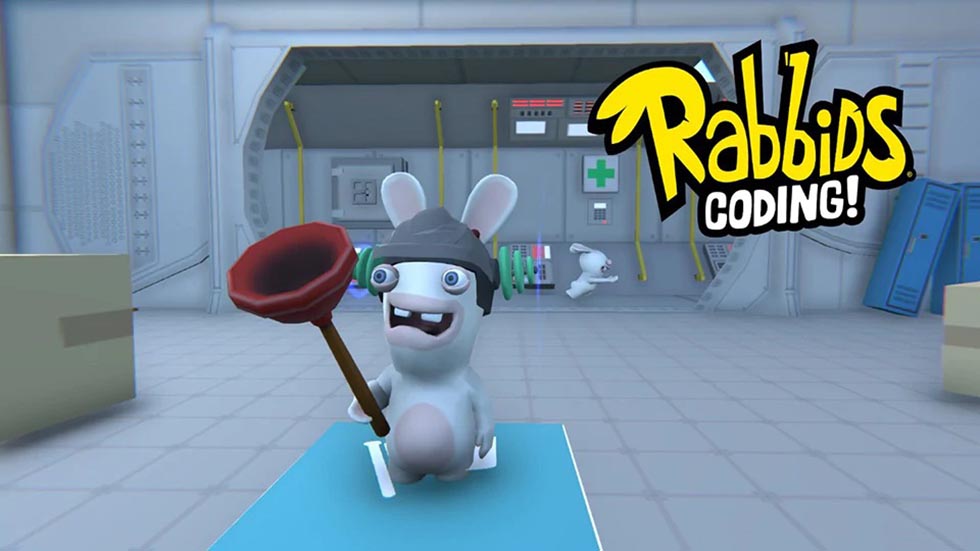 Ubisoft has long prioritized helping to develop the next generation of game designers through their commitment to school showcase events like Level Up and their in-house NEXT event for older students of the craft. However, the company has recently taken a large step in helping to foster game development for those who may not come into play until the generation after next. And they’re doing it with the help of some mischievous little munchkins: the Rabbids.

Rabbids Coding is a new free-to-play game from Ubisoft that the company intends will be for those aged six to 14, but will also be fun for everyone. The goal is to present to them the basics of game coding in a way that will inspire them to learn more in the future. Console Creatures emailed game developer Anthony Kozak to ask about the new experience.

Luke: Quite simply, coding is something the gaming industry can’t live without. So tell me about how Ubisoft came about with the idea to make this game and to make it free and easily available?

Anthony: The idea was jointly conceived by Ubisoft Canada and Ubisoft’s CSR (Corporate Social Responsibility) team to create a small educational game to teach programming for kids using well-known Ubisoft characters. The project is a philanthropic initiative to introduce kids to programming. We wanted to help children have a first approach to the logic of coding something but in a funny way! The intention of the CSR team was first to organize workshops, events, and so on. And finally they decided to release it worldwide for free to anyone, that’s amazing!

Luke: To build upon that, coding has become a sort of general resume skill that ranges from basic understanding right up to professional requirements. So just basic knowledge on the topic will you be learning here?

Anthony: Yes, the purpose is really to initiate and demystify what programming is, and how it’s just about logic. Once you’ve mastered the basic logic blocks, you can pretty much do any algorithm and learn any programming language. The logic remains the same, and only the syntax will change. Even if you don’t plan on making a career for yourself in this field, the skills will always be useful. Programming is an ever-evolving and changing field, so it’s really good to start young and understand the core concepts.

Luke: The Rabbids have, of course, become icons of the gaming world through countless stand-alone titles, crossovers with Mario, a TV show, the list goes on. They are lovable, but the can also be mischievous. So how are they going to be the best teachers for code?

Anthony: Rabbids are fun and attractive to young players. That’s exactly what we needed to turn our serious content into a fun adventure.  It has been shown that learning through an interactive and engaging medium, such as video games, can be very effective, because kids are more focused and directly engaged in what they are studying. That’s how messy Rabbids can help you learn and better absorb serious skills!

Luke: I noticed that despite the more child-oriented Rabbids being the focus of this game, it’s billed for all ages. How entertaining and accessible will it be for an older player?

Anthony: The main target we had in mind while creating the project was children aged six to 14, but really it’s for anyone who wants to have a fun and easy introduction to programming. When Ubisoft started to hold programming workshops for our employees, we were really amazed at how much adults enjoyed the game as well! It’s for anyone who wants to learn, as long as they have the basic reading skills to understand the task of each level.

Can I ask you to think back to your own experiences learning code? Is there a time you can recall where it all really clicked for you and came together, and can you relate that to any of what’s happening in Rabbids Coding?

Anthony: I found programming quite appealing at around ten years old. I had to learn by myself with resources that were not suitable for children. It was about opening Notepad, writing a line of code I found in a magazine, opening the browser and testing it, then starting over with the next lines. This was long and tough, but it’s really fun to “talk to the computer” and build a mechanism step by step. This step by step approach is the same in Rabbids Coding. You can place your blocks, test the program and directly see what’s happening and what’s not working without struggling with the syntax and software. Rabbids Coding is a game that I would have loved to play as a kid. Therefore I’m so thankful that the CSR team has made it freely accessible worldwide and is now organizing workshops and events in more and more places, even to children that don’t necessarily have a computer accessible at home!