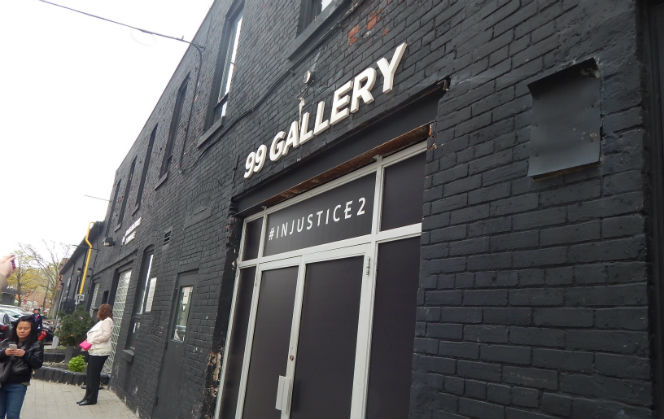 Earlier this week I had the absolute pleasure of attending the launch party for Injustice 2 in Toronto. The shindig was put on by Warner Bros and NetherRealm Studios and even had some celebrity appearances including NetherRealm’s very own and the father of Mortal Kombat, Ed Boon!

The lavish (and I mean lavish) event took place at The Gallery at 99 Sudbury St and I honestly had no idea what to expect. As we entered, we were taken back by just how fancy it all was. It was a large room with 4 play-stations in the middle (to play Injustice 2 of course!). There were huge banners draped from the ceiling featuring 3 of the game’s heaviest hitters; Batman, Superman, and Supergirl.

There was an enormous mural featuring the “Shattered Alliances” of Injustice 2, and it looked incredible. Art was plastered on the wall from the artists that were actually in attendance, Toronto’s own Francis Manapul and Marcus To. Both artists had an impressive array of art inspired by the game and were even doing live drawings for anyone who wanted to watch. I’m glad I skipped dinner because the event was fully catered and even had an open bar. My memory of Injustice 2 will now forever be tied to an insanely delicious Mac and Cheese bar that I frequented more than once. They also offered a range of horderves, a taco bar, as well as an ice cream sandwich bar. Warner Bros and NetherRealm sure know how to feed their players. About halfway through the night, everyone made their way to the stage where Ajay Fry from InnerSpace interviewed the guest-of-honor, Ed Boon about his many years in the video game industry leading up to Injustice 2. They brought up Ed Boon’s work on old arcade games such as Defender, Missile Commander, and Asteroids which he worked on when he was only 16! It was a nice little Q&A that you can most likely find on Youtube and I recommend you do. After that we played the game a bunch more. I was really starting to get a feel for some of the heavies such as Swamp Thing and Atrocitus. Of course, I ended up kicking my friend’s ass countless times and exited the event victor out of the two of us. I absolutely cannot wait for the game to release in a couple days. I’ll add a handy little video to get you caught up before the game releases.

I would like to thank Warner Bros and NetherRealm for inviting me to this incredibly fun event. Injustice 2 is set to release May 16th, and the Injustice 2 for Mobile game is available for free right now on iOS and Android.