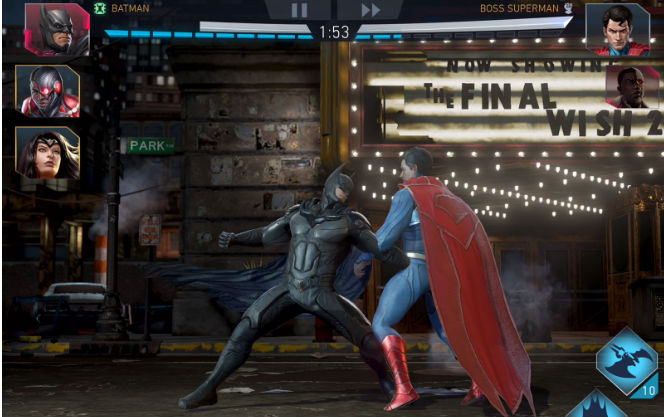 Injustice 2 Mobile Is Available Now For iOS And Android Warner Bros. Interactive Entertainment and DC Entertainment today announced that Injustice 2 for mobile, the follow-up to the wildly popular game Injustice: Gods Among Us, is now available for free on the App Store for iPad and iPhone, where it was recently selected as Editors’ Choice. Injustice 2 is also available on Google Play for Android devices. Developed by the award-winning development team at NetherRealm Studios,Injustice 2 for mobile pits iconic DC Super Heroes and Super-Villains head-to-head in blockbuster 3-on-3 fighting action, complete with best-in-class visuals, a massive roster of characters, exciting new modes and visceral fighting gameplay.

“With Injustice 2, the team has worked extremely hard to build upon an already successful mobile game to bring a fresh fighting game experience to mobile devices,” said Ed Boon, Creative Director, NetherRealm Studios. “We are excited to have fans experience a few of our favourite new features including upgraded special moves, improved combat and Story Mode, which will be released chapter by chapter.”

Injustice 2 for mobile expands on the hit game Injustice: Gods Among Us with new and improved combat, an engaging story mode, exciting features for gamers of all types and customization options like never before. Designed specifically for mobile devices, Injustice 2 for mobile now offers players the ability to move heroes and villains across the “fight line,” perform jumping and crouching attacks and implement advanced zoning techniques with projectiles, all via touch screen controls. New features offer new and exciting ways to play, including an “Operations” mode allowing players to send characters away on missions and a new “Arena” mode for competitive PvP action.

Similar to Injustice 2 for consoles, Injustice 2 for mobile will feature a unique Gear System where players are encouraged to collect, upgrade and customize gear for their favourite characters. In addition, cross-platform functionality with the console game will allow players to complete daily objectives for special in-game rewards accross both platforms.

Injustice 2 for mobile is available as a free download on the App Store for iPad and iPad; and on Google Play for Android devices. Injustice 2 on consoles will be available for the PlayStation 4 and Xbox One on May 16, 2017