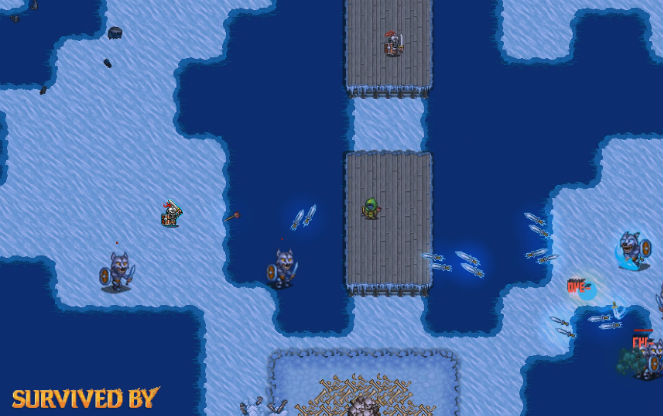 Independent Canadian publisher and developer, Digital Extremes, and veteran independent developer, Human Head Studios, are proud to unveil the fruit of their new partnership, Survived By, a new retro-style Free-to-Play MMO in which up to 100 players fight side-by-side in a bullet hell-style battle where permadeath is just the beginning. Known for producing a diversity of imaginative and compelling games for more than 20 years (Rune, Prey, Lost Within, Boxy Kingdom), Human Head’s Survived By sends players into a pixel-art, war-struck fantasy world where humanity struggles to survive under the onslaught of a ferocious enemy. Heed the call and sign up now FREE for the Survived By Closed Alpha at here.

Pushed to the edge of extinction by a “corruption” that creeps into villages and towns within the World Tree, players will create a tiny but mighty character, craft fantastic and powerful weapons, level up, and explore a chaotic, monster-filled landscape. Survived By encourages players to select one of several classes (Alchemist, Harbinger, Infiltrator, Sentinel, Geomancer, and a Druid, for starters) to experience each one’s unique powers and capabilities. Every time a player dies, they’re survived by a new descendant who carries a small part of their legacy with them. These legacies provide benefits such as new buffs and stat boosts. With each successive play-through, players can select different survivors to experience a new way to defeat the hardest dungeons and bosses of Heartland.

“When we created Survived By, we imagined a game retaining all of the key gameplay elements of the classic games we grew up with and loved, but with a modern role-player in mind,” said Ryan Jackson, Executive Producer. “Jumping into a server with as many as 100 players, we discovered a tremendous sense of wonder and an addictive blend of crafting, social team-work and twitchy bullet-hell madness.”