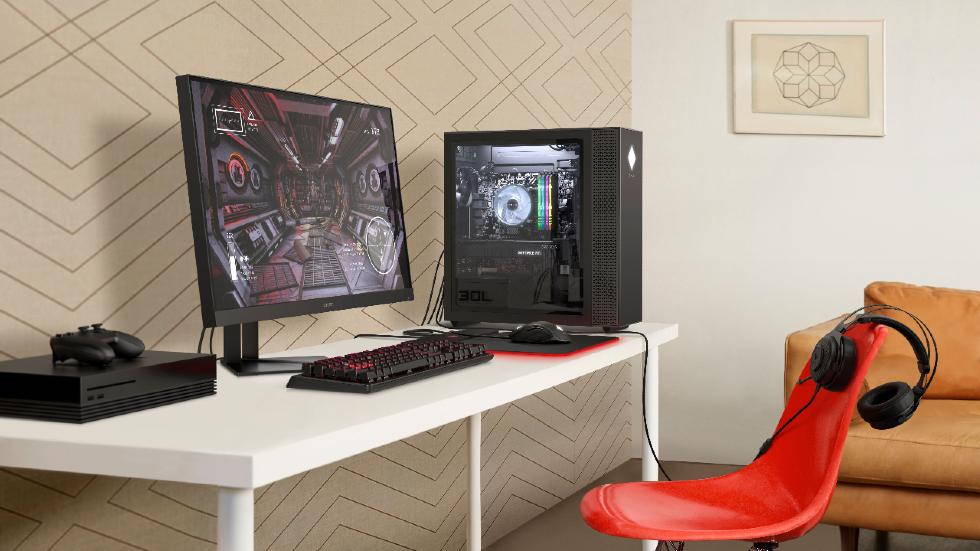 HP Omen Goes Wireless, Gets Clutter Out of the Way

That’s the news out of the “Pride of Palo Alto” —who pride in this new development was on full display in a recent online launch event. I think HP knows that they are a few years behind wireless leaders like Logitech and Corsair. They’ve done wireless offerings over the years in the Omen lineup, but the new tagline appears to be that they have the data and the products now to get you cutting the wire.

According to HP’s content manager for gaming displays an accessories, Eric Galyean, the company needs its wireless offerings to provide solutions to problems gamers care about, such as latency and response time, battery life, and comfort.

HP is using a transmitter system codenamed Warp Wireless Technology. It’s a play on your 2.4Ghz built-in frequency. HP allows the products to be proactive in their scanning and communications so that you don’t miss a single shot.

HP knows that gamers who are not like me — try as I might — like to manage cables. That’s why they put a priority upon making sure that all of this wireless technology shares a USB-C connection class. I know that’s the way most of the wireless peripherals market is going, but I’m glad to see it here because that would be an essential element of shifting to a wireless setup for me.

Before I get into the lineup, I want to stress that because of COVID-19 safety protocols, I haven’t been able to test out any of this equipment as I normally would at a press event. So I cannot personally vouch for how any of the following equipment holds up. So please bear with me!

The first wireless offering is the HP Omen Frequency wireless headset. From what I’ve seen, it’s a snazzy suspension band headset that features an improved dual-mic system with active noise cancelling and a flip-to-mute boom.

Galyean says that HP intends for the HP Omen Frequency to be stylish and comfortable for long plays sessions — which I am not ashamed to say is a must for me!

Despite having a connection that’s always running, the HP Omen Frequency is said to have a low power consumption and a life of up to 30 hours on a full charge.

Next up is the HP Omen Vector wireless mouse. If that name sounds familiar, it’s because HP has simply added wireless use to one of its more popular gaming devices currently available.

Galyean quotes HP internal research from last year in saying that gamers polled by the company now consider owning a wireless mouse above one that is wired because of the freedom and control such devices now afford. The goal here is to give gamers a wireless mouse with high DPI, ultra-fast response time, and a quick-charging and long-lasting battery.

The main draw to this mouse is the aforementioned battery life. HP promises up to 180 hours of play on a 90-minute charge. However, if you forget to charge your mouse ahead of a weekend gaming session, the company is promising that you should have enough of a charge to power through a ten-hour session after just five minutes on the charger.

However, on that charger, there is a drawback I can see to this mouse in that it utilizes a 1ms response time USB-C cable to charge quickly. So there’s an adequate feat that you may be out of luck should something go wrong with the provided cable or should it go missing.

Suppose you want to break down the finer details of the HP Omen Vector wireless mouse. In that case, the promise is an up-to-class 16,000 DPI — which is beginning to be eclipsed by companies like Logitech now offering 18,000 to 25,600 — but paired with a tracking speed of 400IPS and a tracking accuracy of 99%, that’s more than enough for RTS and FPS gaming.

Lastly, is a new wireless keyboard with a mouthful for a name. The aim for this keyboard follows hitting the same requests gamers have of the previous wireless devices; they’ve got to perform fast, accurately and longer.

The “TKL” in HP Omen Spacer Wireless TKL keyboard stands for “tenkeyless” — so this is a keyboard aimed at gamers who want something more compact and clean. Galyean says it was important to provide gamers with something they could move around and configure to keep them competitive, but is also easy to keep clean while being comfortable.

Along with the new wireless offerings, HP is dropping a new wired USB headset just in case you aren’t ready to ditch cords entirely yet. The HP Omen Blast headset features a refined black aluminum studio monitor-style build. For those looking for something not quite so “gamer,” the HP Omen Blast has a simple black braided cord with in-line controls and no RGB light settings. As is customary with most mid-to-high-range gaming headsets now, the HP Omen Blast houses a 24-bit DAC (Digital to Analog Converter) so that you can customize audio as you see fit through the Omen Comand Center. HP is promising that this new headset will come with Dolby 7.1 surround sound as well as a ten-band equalizer that will also include a number of pre-sets for different types of games.