HP OMEN Gaming Hub – One Hub to Rule Them All

Something that is uniquely PC gamers is having a launcher and/or customization program for seemingly everything.

From system controls to vanity lighting to audio equalization and even just launching games, PC gamers require a program running in the background.

So most PC gamers are in the habit of asking for a one-stop-shop when it comes to launching games and making changes. And HP wants its gamers using OMEN to know that they have heard their calls!

Starting today, HP is proudly offering OMEN Gaming Hub — the only place to go to make the most of all OMEN products.

Now, I would like to disclose that I have only been able to experience OMEN Gaming Hub at the time of publication through press materials offered by HP. So I won’t be commenting personally on any of the following services.

Feel the power of algorithmic Undervolting 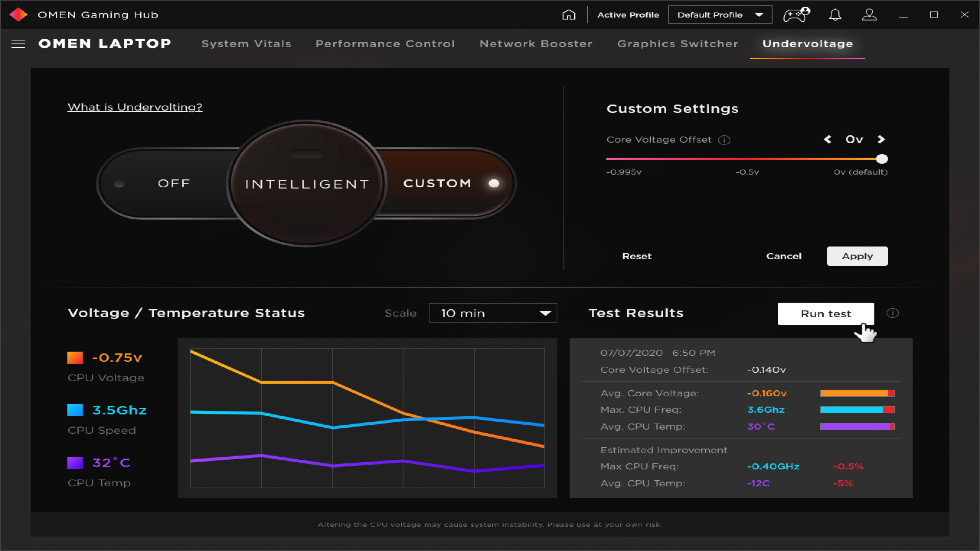 Undervoltage is now on one easy-to-read page. Photo courtesy: HP

The first offering you’ll find in OMEN Gaming Hub is a new and polished Undervolting menu that features the same great CPU customization options you found through OMEN Comand Center, but now with an algorithm named Intelligent that will automatically calibrate you OMEN’s CPU to make sure that you always have the best heat and power performance keeping you in your games.  HP is touting that by running the approximately 15-minute long process, you’ll see performance increases of about 6 to 13%.

The new Undervolting interface is cleanly organized on a single page with visual test result depictions that will help you quickly see how your OMEN PC is currently handling.  This will be especially important as we move into the next generation of games and the technologies behind them, like ray tracing.

Bring all of the lights up

HP is committing to improving how your vanity lighting system works across devices with OMEN Light Studio for those who have adopted a full roster of Omen peripherals. Layout Editor is a brand-new drag-and-drop tool that allows you to layout your setup as it appears in real-life and visualizes any changes you make to your lighting long before you lock them in.

You’ll be able to sync lighting options for zones that stretch from a single key or group of keys to multiple devices.

Now, while lighting effects still consist of old favourites like Cycle, Breathing, Interactive and Wave, there are a couple of new additions that are sure to offer a new spin! The ambient mode takes a real-time screenshot of the colours on your screen and maps it to the selected lighting zone.  Meaning that your lighting will take on the colours of the video you are watching or the game you are playing — keeping your lighting changing along with whatever you’re looking at. Now, if you’re looking to keep things a little more constant, Image mode will take the colours of a picture and animations of a GIF and turn it into a breathing lighting effect.

Finally, Omen Gaming Hub is intended to be a single launching pad for all of the best parts of your OMEN PC, and so HP wants to give you a clean and simple way to get into your games.OMEN Gaming Hub now allows you to sign in using Google, Facebook and HP accounts. There’s a new and simplified homepage that offers personal customization and rewards for using it.

Gallery now offers a place to access all of your wallpapers and photos to make your background right away, while My Games 3.0 now allows you to organize your games, resize their title artwork and view stats and updates in new overview pages.

Freedom that really is free

Omen Gaming Hub is available right now to download for free through the Microsoft Store, which is now optimized for all OMEN PCs and peripherals.

Everything Revealed at The Game Awards 2020