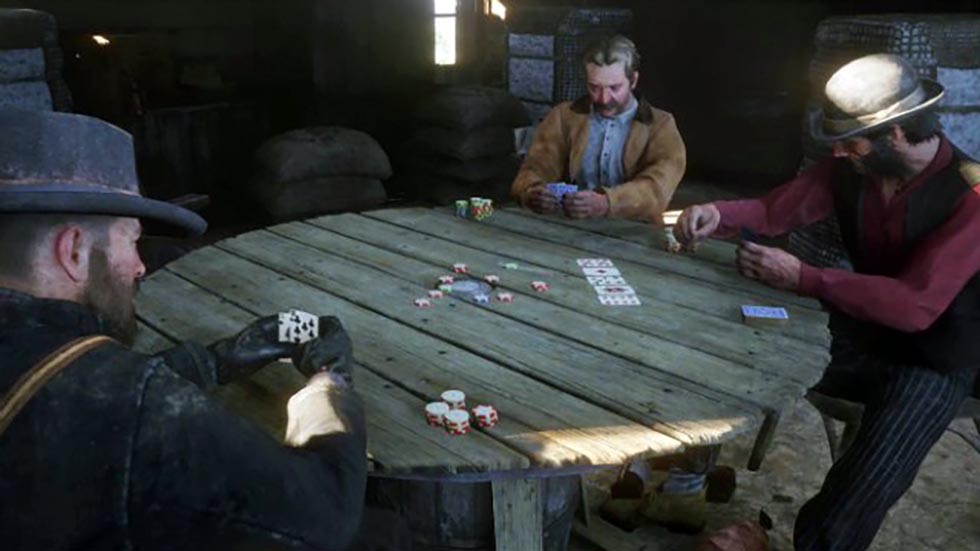 How to Win the Poker Games in Red Dead Redemption 2

One of the gaming world’s most anticipated titles of 2018, Red Dead Redemption 2 didn’t disappoint as it delivered hours upon hours of gameplay in a highly detailed and engaging world. It is this same world that makes the game so great. In it, Rockstar Games has meticulously crafted a living breathing depiction of the Wild West, allowing players to engage in activities that were common for the time. And while a huge chunk of that involved gunplay — after all, you do play as Arthur Morgan, a lieutenant and veteran member of the Van der Linde gang — the game also allows you to participate in adventures that are a little more mundane and ordinary, but no less fun. The game lets players go fishing, hunt wild game, and go on a boat ride, which all make for a nice change of pace and an even more immersive world. However, among all the activities in the game, one stands out.

Red Dead Redemption 2 has a poker system that lets you experience how they played poker in the Wild West. Now, we know that not everyone is familiar with the game of poker, and seeing as one of the missions in the game requires you to play a round of poker to get the upper hand, we’ve got you covered. Read on to find out how to win the poker games in Red Dead Redemption 2. First, you have to learn the rules of the game. Take note that the kind of poker they play in Red Dead Redemption 2 is Texas Hold’em. This means that players are given two cards at the start of each round, compared to other variants that provide four.

Overall, poker’s a pretty popular game, so you shouldn’t have a hard time getting the feel of it. You could even gather up your friends to play a game at your house or online through the Red Dead Redemption 2 online function. Learning poker may be a little intimidating, but it’s quite easy once you get the hang of the basics, and from there, you can enrich your knowledge even as you scroll through your social media feeds. Case in point: PPPoker’s Twitter feed is full of little tips and short quizzes about all things poker, from terminologies and card hands, to tournaments you can watch and learn from. The regular updates right on your phone can help you learn wherever you are in the world — and help you win your next game in real life or in the Rockstar Games’ Wild West. Each player starts with two cards, which are called the hole cards and then one round of betting. Then the dealer reveals three cards, called the flop, with another two cards placed face down. This is the first phase of the game. The second phase is when the dealer flips one of the cards originally faced down, revealing a total of four cards on the table. The last turn is the river, which is when the last card is revealed.

Betting is done in between the phases, giving you an option to check (not bet), call (match bet), raise (raise the bet), or fold (not participate in the round). Once someone makes a bet, players are no longer allowed to check and must either call, raise, or fold. You win the game by having the best hand. Here’s a list of possible hands you can get arranged from lowest to highest:

While there’s a lot of advice that can be given about poker theories, a good place to start is by learning how to practice self-discipline. Professional poker player and MIT professor Kevin Desmond even goes as far as to liken poker to finance, as it is all about managing risks and making the right decisions based on the available information. Keep this in mind during your next game, and you may just find yourself a little bit richer for it — either in a real-life, or in Arthur Morgan’s world.