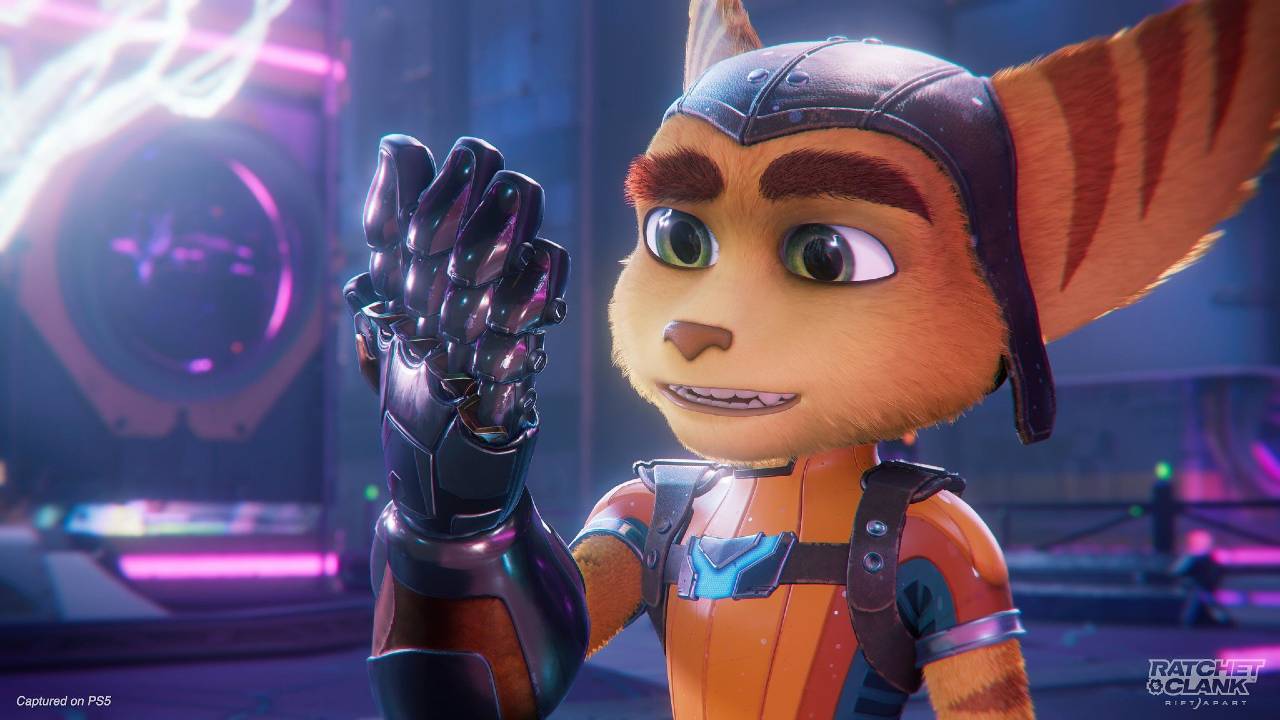 Last week, members of the press attended a virtual event with the team over at Insomniac Games. A panel that included Mike Daly (Game Director), Mike Fitzgerald (Core Tech Director), and Adam Noonchester (Lead Gameplay Program) delved into some of the principles the team uses when deciding on how Ratchet’s arsenal is assessed, how the team uses the PlayStation 5’s 3D spatial sound technology to enhance gameplay and a better look at gameplay mechanics you’ll use.

Adam Noonchester took us through how the weapons work in Ratchet & Clank: Rift Apart and how they were made. Adam’s role within Insomniac Games is the Lead Gameplay Programmer. “When we work on weapons for Ratchet & Clank, we try to evaluate each weapon with three pillars: how spectacular is this weapon to use, how much strategic is it in the battlefield and how unique or humourous is the weapon.” Insomniac tries to push at each weapon to be at least a 10 in one category and often many weapons excel in most categories.

Noonchester pulls up the Negatron Collider, it charges up a big beam of energy that penetrates through enemies and sweeps the battlefield. All the effects of the beam make for some satisfying moments in battle, but the duration of the beam allows for strategic possibilities. Next is the Enforcer, a double-barreled shotgun that gives players the choice to shot one or two barrels based on how far they pull the trigger on the DualSense. It fits a strategic need to get in close and the player can focus on crowd control or DPS with the single or double barrel is a spectacle to behold. And then we have the Ricochet, which fires a metal ball that when it hits an enemy, will pop up next to them, before having the player pull the Adaptive Trigger again to bounce off multiple enemies before returning to the gun. If the player pulls the trigger as the ball opens, dealing bonus damage.

“Once we have this timing working in combat, it was clear we had a weapon that was unlike any we’ve ever made before,” says Noonchester. “The fact you can fire the weapon and step behind cover once it hits gives the Ricochet a special place in your arsenal.”

Starting on the PlayStation 4, the team has done a lot to make combat feel impactful and modern, including auto-strafe and chunks coming off the enemy to convey damage states and ammo bar to the reticle so you’re aware of how much ammo is left. Adjusting the position of the strafe and aim camera and is uniquely based on the weapon type and the team has made improvements to the core combat that make the gameplay better.

The DualSense enables Rift Apart’s arsenal and one of the biggest things for the team working on the gameplay mechanics is the Adaptive Triggers. Using the Burst Pistol as an example, we see the pistol has two modes of fire: slow but accurate and fast but inaccurate. The Adaptive Triggers allow this to be done on a single trigger and when using the pistol. It has two sets of resistance, the first shoots slowly, the second shoots faster.

Circling back to the Negatron Collider, it has a charge up before you can fire and before the DualSense, the team would one of a few input methods. An example is a weapon firing automatically after holding the trigger long enough or fire when you release the trigger or hold a separate button and then pull the trigger to fire. “These are all functional, but none are ideal or feel great,” says Noonchester. “With the Adaptive Triggers, you pull the trigger until you feel the resistance and the gun starts charging until you’re ready to fire the beam.” This gives the player the tactical choice when to fire the weapon and allows them to cancel the shot.

Mike Daly serves as Rift Apart’s Game Director and he spoke about the game’s DNA and core variety of mechanics and minigames found in each game. Daly spoke about the Rifts Tether, which grants the ability to tether to portals in each environment. “The cool thing about this mechanic is that Ratchet’s technically staying still you still get the rush of an exhilarating traversal because of the feedback.” An example is the rifts have a distinct audio sound and you get a sense of them coming towards you and around you with 3D audio and spatial audio. “This is complemented by the haptics and it is nuanced, and you can feel that a rift is coming,” says Daly. “We have the power to render the world from two perspectives at once while all this is happening and when you put all this together it becomes mind-bending.” 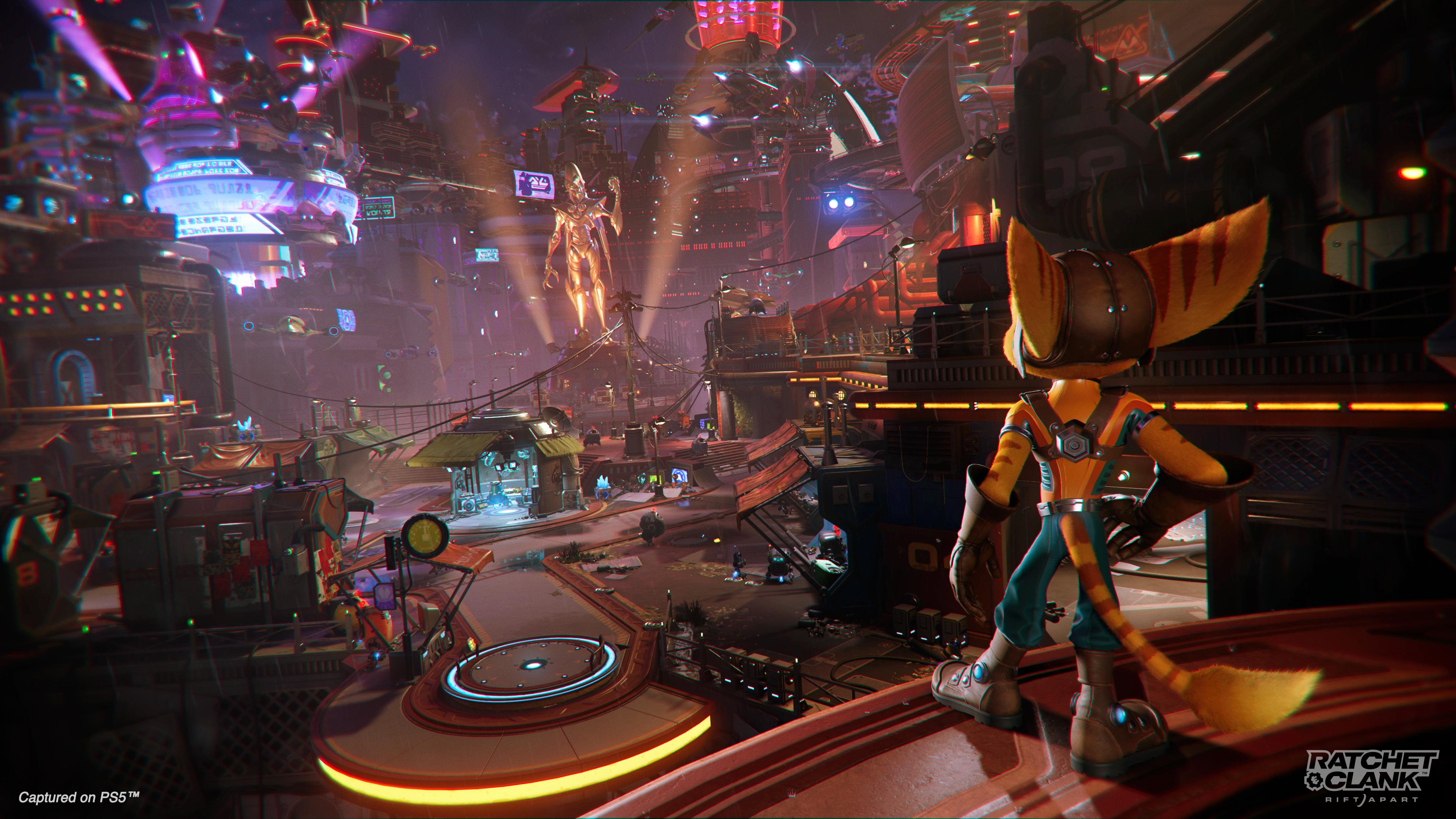 You’ll unlock a new gadget called the Phantom Dash and it makes a huge difference to the gameplay. The Phantom Dash allows you to phase out of reality for a moment, providing a burst of speed in any direction. With it, you can phase through any attacks and it is super responsive. It is flexible and fundamental to changing the flow of combat and traversal, giving you a lot more room for expressiveness at a higher skill ceiling.

The Hoverboots are back, and this time Insomniac wanted to see what they could with the Adaptive Triggers. Eventually, the team looked at rollerblades and you could do kicks to build up your speed to get that satisfying push forward to build momentum. Players have a lot of control over how fast they are going while doing this and you’ll use these skills to navigate traversal challenges and cover a lot of ground on planets.

A great way for players to use all the gadgets Rift Apart offers is through Pocket Dimensions – stuff from all over the galaxy has been sucked into these portals, leading to the off-the-rails design and level design. A lot of the portals are found off the beaten path. In these portals, you’ll find armour pieces and the armour system lets you mix and match three types of armour, giving you a lot of control over how your character looks. In addition to mixing and matching, you can adjust the colour palette and feeds right into the expansive photo mode available. “You can change a ton of camera and lighting parameters, poses and expression and be creative with your screenshots,” says Daly. 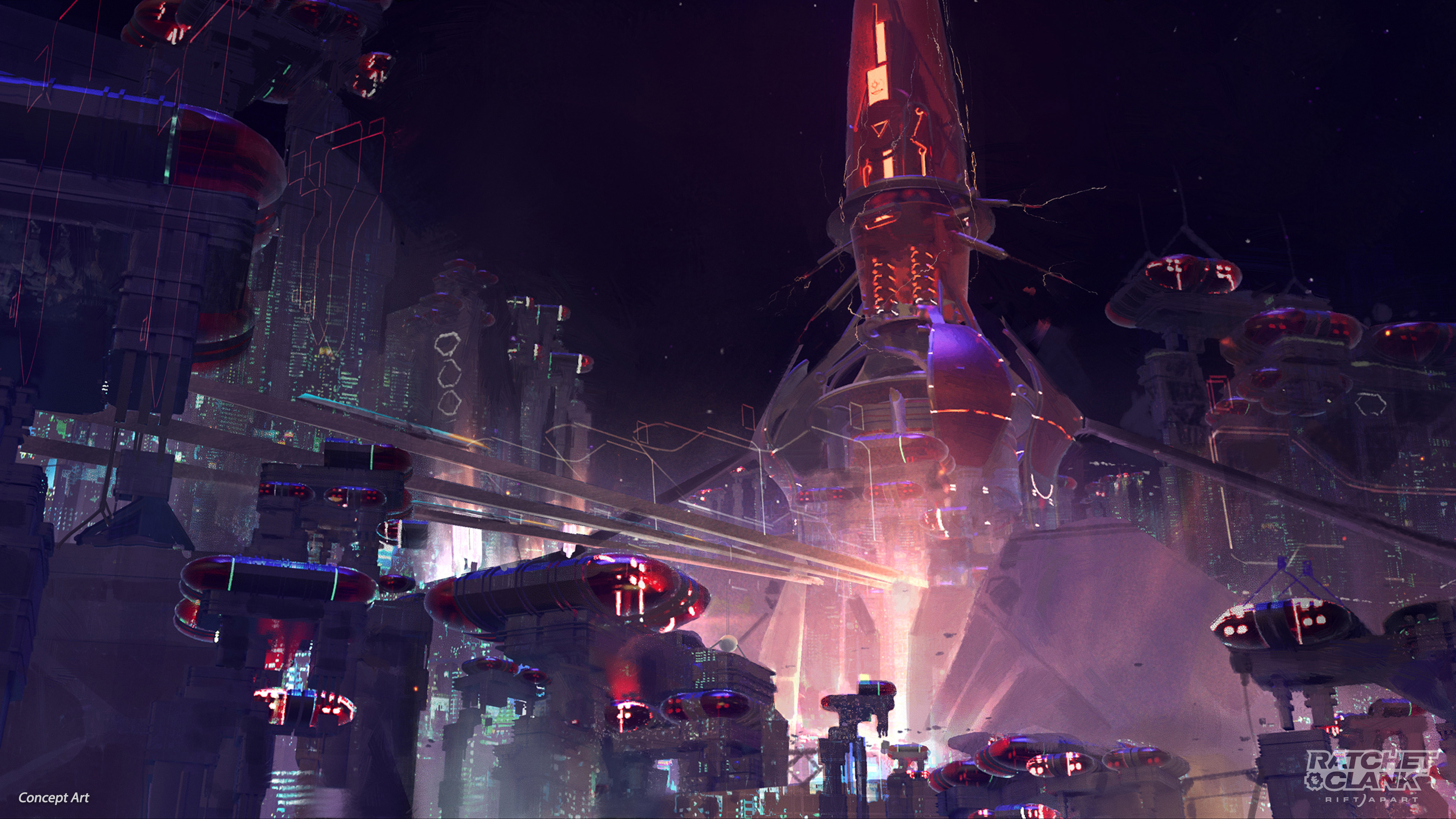 Rift Apart also features mounts for Ratchet and Rivet to use on planets. “We’ve got two species of creatures you can ride, and we’ve tuned the controls to feel animalistic,” continues Daly. “The haptics makes the animals feel alive and mobile, 3D spatial audio gives you a great sense of speed as you can sense objects as you speed by them.” Sounds like a great way to move through these big open spaces on each of the planets.

Early on, Adam Noonchester prototyped a spider-tank vehicle that could climb surfaces and could carry a serious of power. “As soon as everyone played this demo, we knew it needed to be in the game.” Insomniac is always thinking about how they can take mechanics and use them to tell a better story. “Our features designer got the idea of turning the prototype into a character instead of a vehicle so they can add more personality and story to the game.” Ratchet needed a way to bypass computers and moments where the developers could mix up the gameplay leading to the creation of Glitch the Arachno-droid.

In Rift Apart, there will be a dimensional fissure to navigate through. In this case, Ratchet & Clank need to work together again, Clank enters the dimension’s support to figure out a way to channel the dimension’s energy. You can use orbs that incorporate physics which use Clank Possibilities, these are used to open new pathways for Clank.

With each new game Insomniac makes, they want to make it more accessible to a broader audience, building on the accessibility features from Spider-Man: Miles Morales. With new ways to tweak the looks and sound and feel of the game to help players with sensory impairment. Players who may have dexterity and timing issues will be able to use the Global Time Slow feature and can assign it to the D-Pad so at any time you need help with a dexterity challenge, you can slow down the game and play through the controls before returning time to normal.

Mike Fitzgerald, the Core Tech Director on Rift Apart wanted to talk about how Insomniac is using the new hardware on PlayStation 5 to craft new experiences for the player. Moving past just using the SSD to speed things up, Insomniac is developing new and transformative content because of it. “While Ratchet & Clank is not considered an open-world game, in Rift Apart, we’ve set up the planets to constantly stream content like Spider-Man: Miles Morales,” says Fitzgerald. “This is despite the fact each world is physically much smaller than Manhattan, but because it streams so fast, we only load the content you need at that moment. This is true to a very small scale so even if you turn the camera, the textures behind you load out and the ones in front load in. We can do this in a matter of frames and because of that we pack more and more in every corner of the world. We are no longer locked to small palettes of textures and objects for an area, so it makes it easy to drop a massive robot in your path.”

In well under a second you go from one side of the galaxy and in the State of Play footage, it’s shown when you’re transported to a new area with all the characters joining you. Worlds are based on this mechanic in Rift Apart. Dubbed Sync Planets, there are two versions of the same planet in two dimensions and you’re jumping back and forth between them, each with full fidelity and taking advantage of the memory available to use with the console. There is no trace of the location when you aren’t physically there and when you switch between them, it happens in the swing of your hammer.

Character progress is shared between Ratchet and Rivet. Insomniac decided early on that progress is much more rewarding when you must use it all the time.

Ammo is refillable at vendors and players should never feel they can’t use the bigger guns. Using the biggest guns on the weaker enemies is encourage and Insomniac tuned the game to strike a balance to use all the weapons and have ammo.