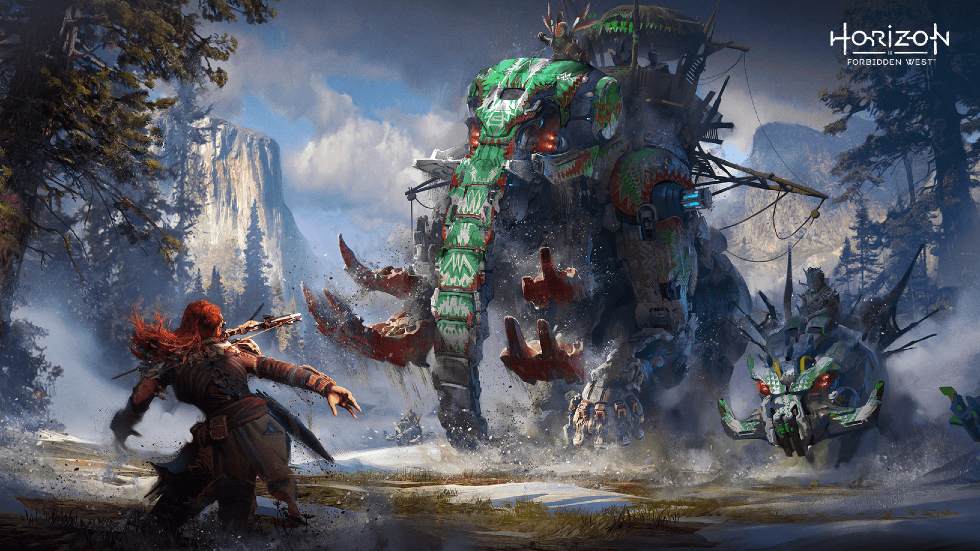 Over on the PlayStation Blog, Bo de Vries, the Community Lead at Guerilla, broke down new details on the robot machines Aloy will face, as well as some returning machines who will be present in the sequel including the Watcher and Snapmaw.

“We’re getting to explore a new area within the world of Horizon,” begins Blake Politeski. “It was interesting to figure out what type of machines would live in different ecological zones, and how they would interact with each other, their environment, and of course humans. Machines are the so-called caretakers of this world, so how they perform their roles and what the player can do to use these behaviors to their advantage was always interesting to consider.”

During development on Horizon Zero Dawn, the team had a lot of ideas but they couldn’t implement them all, so they added them in the sequel.

Did you know that there were over 25 different machines in Horizon Zero Dawn? “In the first game we had to create the foundation,” says Blake, “so we started small by defining different roles. The Watcher is like a security camera, the Ravager is an enforcer, and so forth. Once those base roles were decided, we could really build on that by mixing in robot designs, unique abilities and features, and of course cool weapons and attacks.”

In the sequel, there are more machines than ever before. “For example, we knew we wanted a slightly bigger flying machine than the Glinthawk, which resulted in the Sunwing – but it needed a place and a role in the world. We studied various flying reptiles and primitive birds for inspiration and came up with the concept of their wings collecting solar energy during sunny weather. This in turn created an interesting gameplay dynamic: Sunwings will be vulnerable when they are harvesting solar power, but are also more alert to potential predators when they are idle.”

By defining the roles of each machine in-game, the development team is able to expand on their roles in the world and to give them a greater purpose. Creating an authentic world has always been the main focus for Guerilla and that means making the machines believable.

In a previous post, Guerilla details some of the new mechanics Aloy would be able to use. These changes were made to meet the challenge of facing new machines in the world.

“Aloy has many different types of weapons and ammunition available, and she’s going to need them all to beat the different machines!” says Maxim. “Without spoiling anything, every machine has multiple ways to be defeated. We tried to make it clear for players through the machine design, and added textures to show the weak points or interactive components. You’ll need to study each machine closely to find different ways to approach it.”

Simply shooting pieces and components of an enemy will no longer do, instead, machines may be, for example, digging for resources. In doing that, the machine creates a dust screen, giving Aloy the chance to get in closer undetected to take down the machine.

In fact, this time, your enemies are as mobile as you are and you’ll need to ensure you understand that. “The machines in Horizon Forbidden West are more mobile in almost every way you can imagine – jumping, swimming, clinging to surfaces… Because of this, Aloy will need to keep up with them, so there’s new movement mechanics to help her out. We’re also focusing more on Aloy’s ability to survey and plan an encounter before engaging, as well as her ability to escape if things don’t go as planned.”