The release of Watch Dogs: Legion is almost upon us. Ubisoft Toronto has been deep in development in the new installment in the Watch Dogs franchise. The third outing of Watch Dogs opts to tackle the post-Brexit landscape of London, smeared in graffiti and neon lights.

Watch Dogs: Legion is an ambitious leap from 2016’s Watch Dogs 2. The latter entry won over players who may have been underwhelmed by the first entry back in 2014. Watch Dogs: Legion hopes to double down on the scope and expand on the DedSec hacker operation.

Rather than fixate on a singular protagonist, Ubisoft Toronto took on the challenge of creating a “play as anyone” model. Set in the near future, Watch Dogs: Legion takes place in a semi-dystopian London where Albion, private military enforcement, have overtaken the streets. London is now littered with frustrated bystanders coping with London transforming into a surveillance state. In this open sandbox, players can recruit all manner of NPCs to join the DedSec ranks and takedown Albion and tech company Blume.

We were invited to go hands-on with Watch Dogs: Legion. We had the chance to play through some of the early missions, explore some ancillary side content, and recruit NPC while navigating the streets.

Our Watch Dogs: Legion demo opened up a few hours after the inciting incident. Early on in the game, DedSec is on the move, attempting to thwart a terrorist attack laid out by a mysterious group known only as Zero Day. As mass explosions are detonated around various hubs in London, including the Houses of Parliament, DedSec is framed as the instigators. 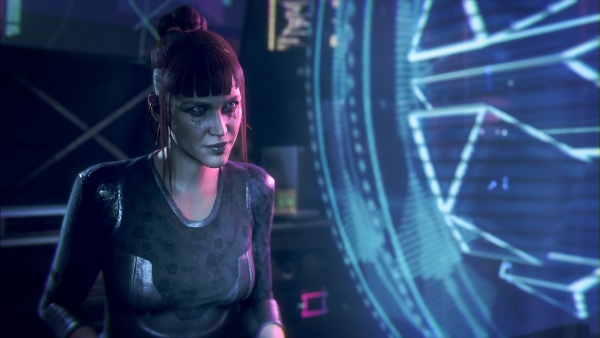 The organization has since gone underground. DedSec is now working towards uncovering the faces behind Zero Day and recruiting new members to the cause. Our demo opened up with a cast of three operatives available and are pointed to the DedSec HQ for a briefing.

Walking through the streets of London, it’s clear this is anything but a peaceful place to live. Armed military soldiers patrol the streets. Security checks can be seen on the roads and drones can be heard buzzing through the skies. While certain parallels between Watch Dogs: Legion and our real world can be drawn, Live Producer Lathieeshe Thillainathan told us last year that many narrative concepts were based on “speculative fiction”. This certainly doesn’t take away from the realistic dread that can be seen in today’s landscape. This feeling is mixed with certain environmental elements that harken back to Black Mirror.

At first, I was in the shoes of Teresa Lawali, a doctor in London. Teresa had access to a medical uniform, useful for infiltrating hospitals and medical facilities. This character also has an LTL Dart gun for incapacitating enemies and a perk for healing. Teresa is only a drop in the bucket as far as characters and their respective roles are concerned. Playing as Teresa, I arrived at DedSec’s HQ and sat in as Bagley (DedSec’s AI assistant) and Sabine (a DedSec lead) gave us our next mission.

Doled out a mission dubbed ‘Digging up the Past’, I swapped over to Jack Watanabe, a professional hitman, in the Team menu. Seeing as though I was to be infiltrating an Albion work site, having an operative carrying a Desert Eagle and able to do instant takedowns was a must. Jack also had a dodge roll move in case things got hairy.

God Save The Queen

Missions in Watch Dogs: Legion follows a similar structure to Watch Dogs 2. Oftentimes, I found myself infiltrating a facility or a part of the map occupied by Albion forces. From there, I’d navigate through the area to my objective. By and large, the mission structure is very familiar. However, now that I had a lot more freedom in which operative I used on the mission would vary the strategy taken. 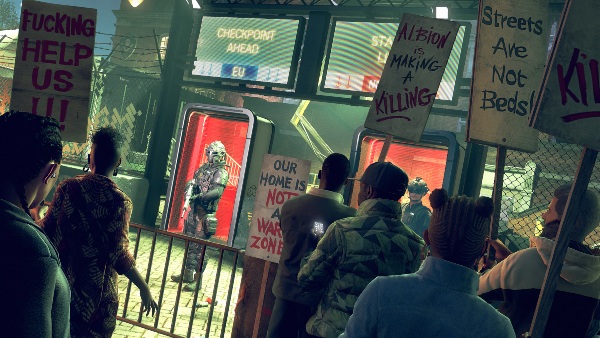 As always, a big crux of Watch Dogs is hacking into various pieces of tech and using them to your advantage. Whether it’s hacking a camera to tag and track enemies or hack drones to disable their security. Despite being able to customize your loadout anytime during the game, I always felt compelled to keep the spider drone in my arsenal. This little gadget is your best friend in Watch Dogs: Legion.

The spider bot is a zippy little guy who can get into a room via vents and tap into Albion networks, unlock doors or otherwise complete tasks you’re not able to do. The game also offers many platforming elements into the level design. Transitioning to control the spider bot, there were times when I would have to scale bookshelves and boxes to reach a higher area and progress. Based on my time with the demo, a lot of emphases is going to be placed on using the spiderbot during missions. While hacking is always at the forefront, I always felt as though my strategies beyond that were up to me. If I used a gun-touting operative like Jack, I could go in guns blazing, hitting headshots and taking down enemies when available. However, I could also use a silent approach. Jack also had a cloaking ability enabling me to sneak past guards and go for the silent takedowns.

The variety of missions I experienced were both on the smaller side and larger in scale. As you are taking down a shadowy hacker operation and privatized military group, a lot is at stake in Watch Dogs: Legion.

Going Beyond a Singular Protagonist

First, we had Aiden. Then we had Marcus. Now, we have virtually anybody. Although my demo had three preset operatives, I was able to begin recruiting anyone I came into contact with. It’s a concept that was hard to grasp at first. I often wondered if it would be impactful. Once getting my hands on the demo, it clicked and felt like a satisfying system. Walking the streets, I could pull up my phone and begin scanning the information of any NPC. Every person on the street has their own strengths and opinion on DedSec. Talking to them would begin a small recruitment side mission where upon completion, they would join the group. Watch Dogs: Legion has also introduced a “perma-death” feature. The studio has spoken about the system in which if an operative dies in a mission they are gone for good. However, during my demo, if an operative was defeated during a mission, they only went to jail and had a 20-minute cool down before I could use them again.

Some NPCs will look down on DedSec and in order to win them over, you have to clear out and “inspire” the various areas in London. Like many Ubisoft games, this means clearing out one area of the map. Afterwards, your chance to recruit NPC goes up. Additionally, you’ll also be able to recruit more “legendary” NPCs.

My demo had most of the City of Westminister area cleared ahead of time. This meant I could complete a side mission titled ‘Like Clockwork’ to unlock a new “legendary” operative. In order to do so, I was tasked with infiltrating the Palace of Westminister. Once inside, I used my spider bot to climb up the clocktower, platforming off the cogs and gears within to disable Albion’s propaganda system. Afterwards, I unlocked Coll Henderson. This debonair spy quickly became my favourite, partly due to his abilities and weapon set. Coll had a silenced pistol at his disposal, a spy watch that disabled enemy weapons. Above all else, he could call in his spy car which could shoot missiles and cloak itself. Coll is a certifiable 00 agent and I had a lot of fun using him for the remainder of my time with the demo.

That said, there’s an obvious downside when it comes to these more high-powered operatives. It may be hard to justify playing as a more run-of-the-mill NPC when you’ll have a distinct advantage using an operative such as Coll.

Unwinding From a Long Day of Hacking

Watch Dogs: Legion isn’t just about hacking drones and camera systems. The map of London contains ancillary activities you can complete throughout the campaign. You can hit a local pub for a couple of cold ones and shoot some darts. Of course, you can also jump into any car you see fit and take a joyride. Driving in Watch Dogs: Legion is still a bit clunky. Watch Dogs has never been able to masterfully grasp driving mechanics, but it does feel a bit cleaner. While there are some more contemporary vehicles, some do sport a more stylish and futuristic design.

One of the more expansive activities I encountered was the Bare Knuckle Arenas. These activities acted as a Fight Club of sorts. To complete each Bare Knuckle activity, I went through four rounds of boxing. Punching, dodging and deflecting incoming hits in these underground fights were relatively straightforward. We’ve seen this type of activity before in games. However, the Bare Knuckle Arenas do fit in this universe where you can imagine civilians are looking for a way to vent their frustrations in any manner.

Once I wrapped my head around the concept that Watch Dogs: Legion isn’t telling the story about one single individual I understood what Ubisoft Toronto is trying to do. This is a DedSec story and the narrative revolves around the rise of the hacker group. DedSec is taking back London from the thumb that looms over, threatening to crush civility.

The missions themselves are fairly straightforward in design but offer freedom in the ways to approach them. Using various operatives will open up new ways of infiltrating areas and disabling enemy units. Experimenting and building out your DedSec team is the primary system at play.

Overall, I’m looking forward to my return to London in Watch Dogs: Legion later this month. Once I’m able to have ownership over my team, Albion and Blume are in for a world of trouble.