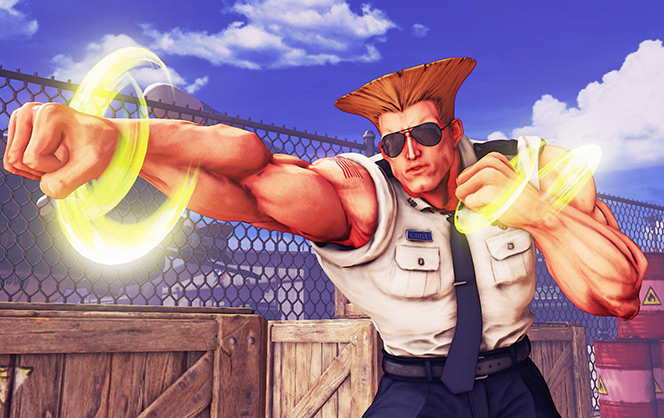 In Street Fighter V, Guile retains his ability to dominate both the ground and air with his solid normal attacks and special moves, such as Sonic Boom and Somersault Kick. He also now has the ability to enter a crouch walk state called Faultless Move which allows him to keep his charge while moving forward, giving him even more options in his kit to keep his opponents in line.

Guile is a great choice for those of you who are looking for a charge character who can easily control the pace of the match.

Guile is certainly one of the most iconic Street Fighter characters as he was one of the original eight World Warriors in Street Fighter II. His connection to Charlie Nash was revealed in his Street Fighter II ending as he prepares to finish off M. Bison once and for all for killing his friend and mentor — but is stopped at the last moment by his wife Jane.

It wasn’t until Street Fighter Alpha 3 however where we learn more details about Guile’s search for Nash who had gone missing during a secret mission. While Guile eventually found Nash at the Shadaloo base, their reunion was short lived as Nash held off M. Bison to allow Guile to escape and was the last time he saw the man who taught him how to throw Sonic Booms.

In addition to having Guile make he debut, Capcom is implementing a new Rage Quit system to penalize those who are bad losers.

We’re also happy to announce that we will be implementing a system to punish players who frequently disconnect during matches (aka rage quitters).