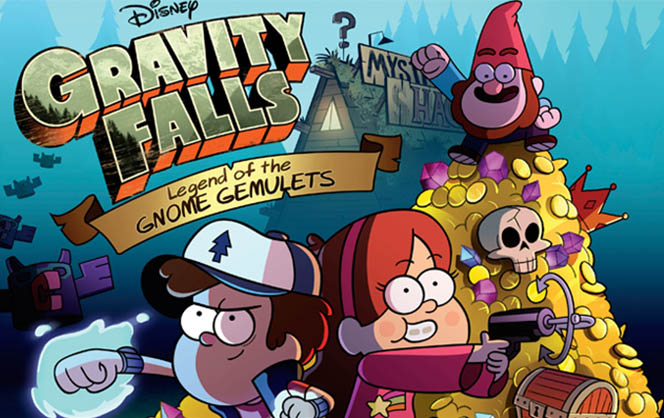 Ubisoft and Disney Interactive has revealed today that there will be a Fall release date for Gravity Falls: Legend of the Gnome Gemulets! The action platformer is based on the hit television series Gravity Falls (on Disney XD), in collaboration with Alez Harsh, the show’s creator and executive producer.

Players will play as main characters Dipper and Mabel Pines, switching back and forth between the duo, to use their unique, magical abilities and powers; powers they have acquired through Gnome magic! It is through this magic that they must help Jeff the Gnome retrieve the ancient Gnome Gemulets, and restore magic to the Gnome Forest! Dipper is able to use his flashlight and the Gnome Battle Cuffs, which give him the ability to defeat enemies using powerful punches, for closeup attacks. Mabel uses her Fleece of Bezazzlementthat, which allows her to whip her sweater at enemies and monsters from afar. Together they must help each other through their epic quest, and unlock the secrets of Gravity Falls’ past!

Gravity Falls: Legend of the Gnome Gemulets is powered by the UbiArt Framework game engine, so players will be able to explore some of their favourite places from the show (like the Gnome Forest and Mystery Shack), all in amazing graphics and backgrounds.

Gravity Falls: Legend of the Gnome Gemulets will be available on October 20th, and is an exclusive for Nintendo 3DS!