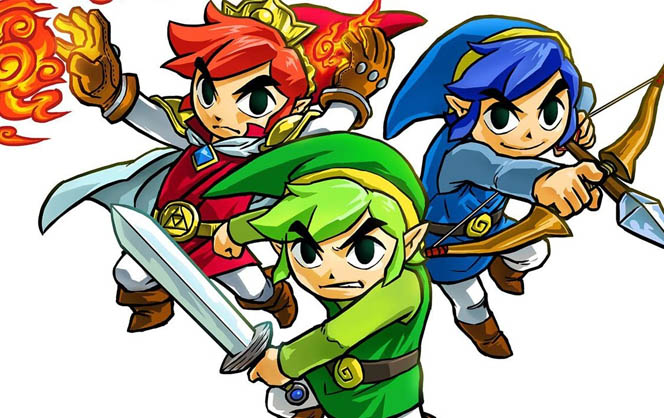 Form the Ultimate Trio in The Legend of Zelda: Tri-Force Heroes Too dangerous to go alone? Well, in the Legend of Zelda: Tri-Force Heroes (available October 23rd, for the Nintendo 3DS) you can adventure with your friends!

In the Legend of Zelda: Tri-Force Heroes, three heroes (green, red and blue Link) must ban together and embark on a journey through fiery volcanoes, icy caverns, dangerous dungeons, and defeat a slew of bosses, all while working as a team! Similar to the gameplay and style of the previous title in the series (the Legend of Zelda: a Link Between Worlds) players will still have to solve typical Zelda-esque puzzles, and are given the option of customizing their characters with a variety of costumes and items found within the game! Players can either embark on the adventure with two other players, or go at it alone! “We are constantly transforming our most iconic franchises to give players unique gaming experiences,” said Pierre-Paul Trepanier, Nintendo of Canada’s General Manager and Senior Director. “The Legend of Zelda: Tri Force Heroes is one of many games launching this year that presents beloved characters in unexpected new game-play settings.”

Players can pickup, carry, totem, and throw other players, which can be useful in escaping dungeons and reaching special areas. Another fun feature of this game is, when playing online in the multiplayer mode, you and your two buddies can use emoticons to talk to each other, just by using the touch pad! Its a great way to communicate if you’re not in the same room as each other, and it can be a really fun way to throw off your friends! There is also a multiplayer Coliseum mode, which allows players to battle one or two other heroes, while wearing collected outfits they have obtained during their adventure!

The Legend of Zelda: Tri Force Heroes will be available in store and on the Nintendo eShop for $49.99. In addition to this game’s release, a special Hyrule Edition of the New Nintendo 3DS XL system will be available on October 30th, and is an EB Games exclusive! The $259.99 console (game not included) is gold coloured and features a Hylian Crest on the front!