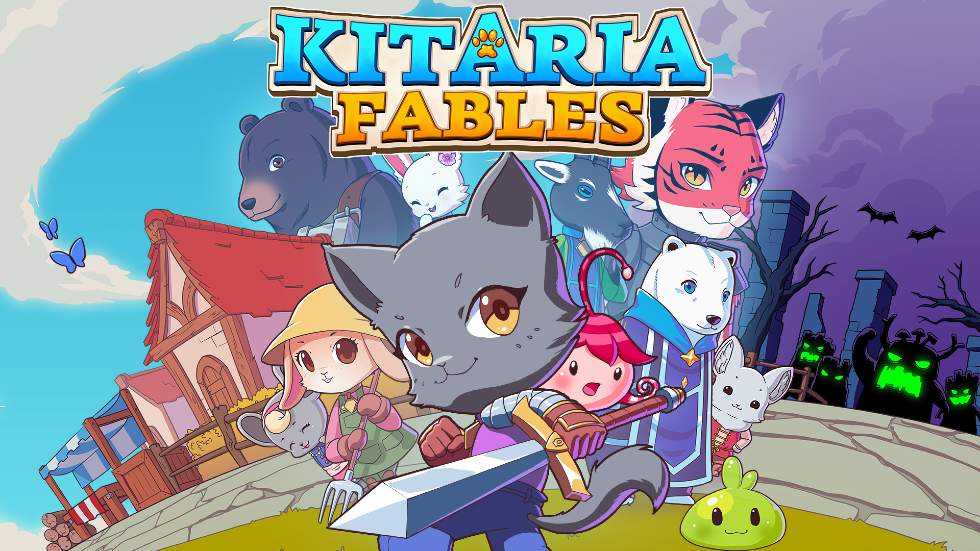 Kitaria Fables is a cutesy dungeon crawler and farming simulator that isn’t out to change the way you experience a genre that has become an indie staple over the past decade or so. It seems more likely to be out to introduce a younger and less experienced audience to the many reasons we’ve come to be so attached to the genre.

Indonesian developer house Twin Hearts is clear that their upcoming animal adventure title is just that — an adventure and less a simulator. And from my time with their game so far, this is very much a simplistic yet enjoyable adventure where farming and crafting become a support network for RPG elements that don’t entirely warrant having such a network.

The need for a story has taken a paws

Farming-sims have become somewhat notorious for being much the same. Kitaria Fables doesn’t really change that as you play as Nyanza, a young knight of the Royal Capital and his floating… well… his floating companion Macron.

You take up residence on your grandfather’s farm in Paw Village — a small non-armed town in the land of Kitaria where a once vanquished evil known as The Calamity [probably not Calamity Ganon] is making its return. The result is that otherwise cute and cuddly creatures are joining an orc army and becoming… well, cute but slightly more dangerous!

See the forest for the friends 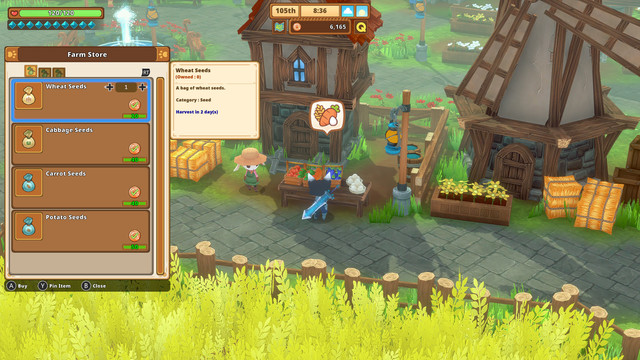 Twin Hearts have made sure that Kitaria Fables is a family-friendly title that is suitable for all ages. Its world is one that is colourful and extremely inviting… you know, for one that is living in fear of an impending evil event! The forest friends you make along the way are all mild-mannered and open to being best friends. And while there’s no doubt that things are becoming militant, The Calamity is contoured by the pacifism of Kitaria’s creatures.

Be a warrior with whiskers

Where I am most enjoying Kitara Fables as of right now is in its combat system. Unlike most action-adventure RPGs, there’s a very basic class system that doesn’t lock you into any skill trees or specific combat styles. You’ll start out your adventure with a simple sword and a fireball spell, but as you gather resources, you’ll be able to become a competent archer or a magician or stay a knight. 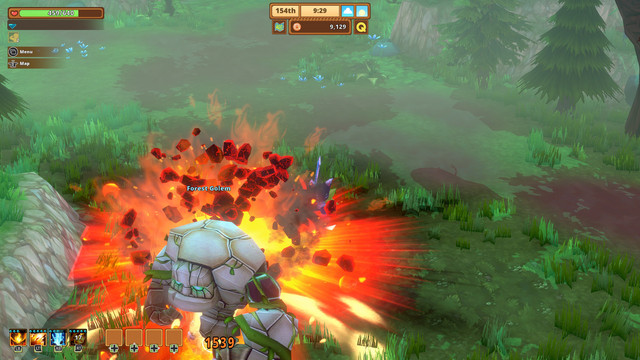 The combat isn’t overly challenging and does a lot to make itself accessible to all ages and skill-level seekers. Enemies are pointed out with arrows that point them out as you pass. Emotes that appear over their heads will simply inform you if they are hostile or not. And if they are, you’ll have fair warning of when they are going to attack and how to dodge said attack. It can be a little bit overused, but this isn’t a roguelike that’s trying to teach you enemy patterns that you have to learn at the threat of death.

For what it lacks in technical creativity, there’s a fair amount of character customization for Nyanza with several different faces to wear and several armour sets that can be bought or crafted and will help you amplify the weapon you chose to use.

You’ll grow alongside what you grow

Thunderbunn Farm [your residence] is a parallel for your hero. A lot of the growth you do in preparing for The Calamity happens in the field.

There’s a little bit of a glaring lackadaisical feel to farming. There’s no choice to how your farm looks or whether your crops thrive or even survive. To me, activities on the farm feel like they take too much of a supporting role to the resource collecting you’ll need to do in order to become a stronger soldier, archer or magician. 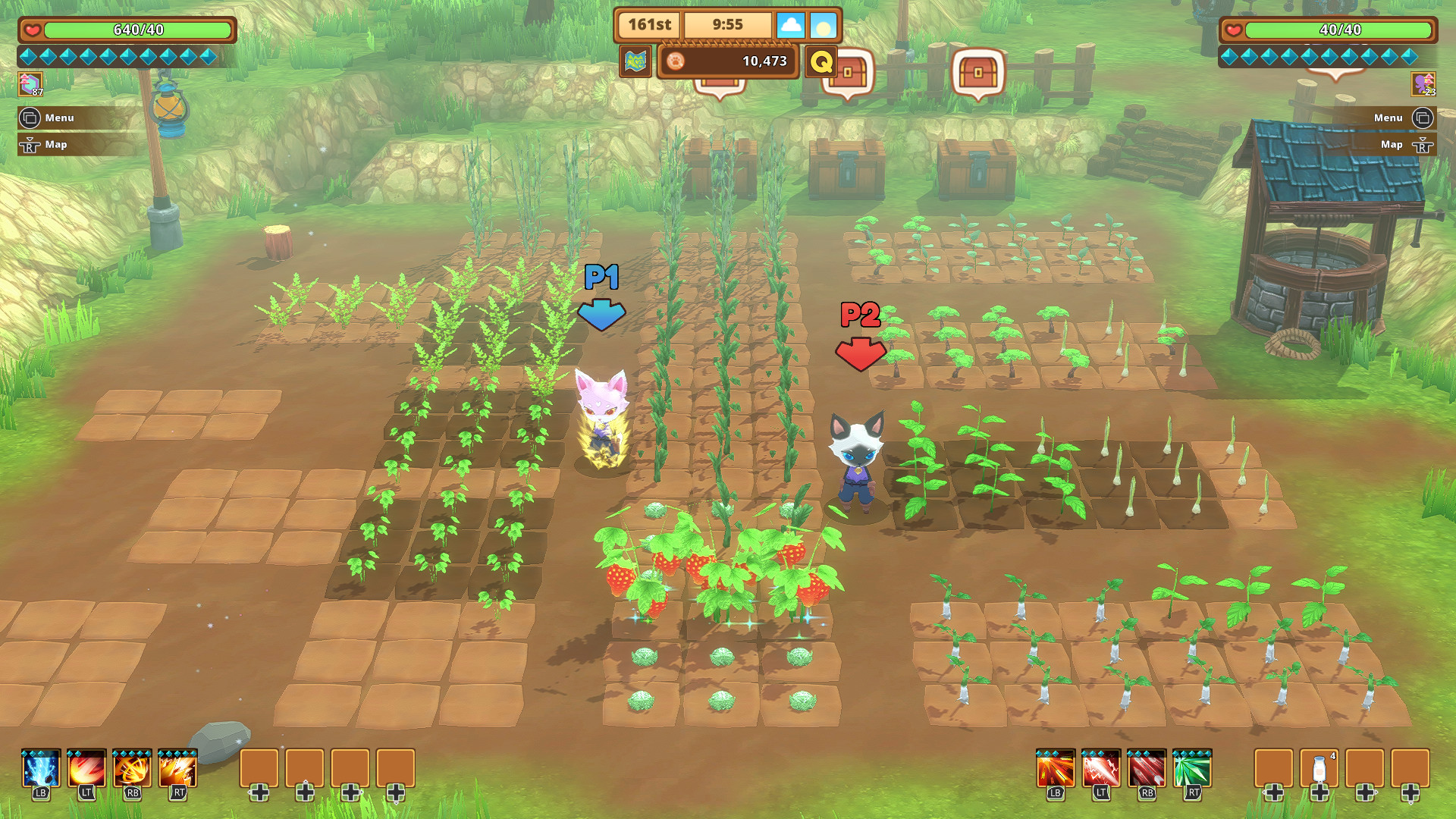 The farm you are given has very little customization to it currently, which for me is equating to a large portion of the reason that I currently use it primarily as a free crash pad.

It’s still far too early to comment on how the game will play come launch, but I can’t help feeling that I worry about how farming is going to be overall. You only get a small set amount of quick-swap slots, and when you factor in fighting and healing, there are not many slots left for farming needs as your hoe and watering can. I find myself often needing to open the inventory menu quite frequently to keep on top of my farming needs. I’m also a little over compulsive as to the fact that no matter how many seeds you buy, planting is done on a grid of three-by-three rows. It makes for inefficient and disorganized planting, and it’s been driving me mad!

Kitaria Fables has some work to do before launch

With a cutesy forest friend’s aesthetic and very little real challenge to it, Kitaria Fables isn’t going to be for everybody when it comes out on PC and Nintendo Switch on September 2. There’s not much customization or difficulty in combat, and a lack of urgency in the need to farm or craft can sometimes feel like it’s there just to add another corner of gaming to this title. There’s a lot to love here. I’m certainly interested in seeing what this game looks like when it comes out in just over a month.