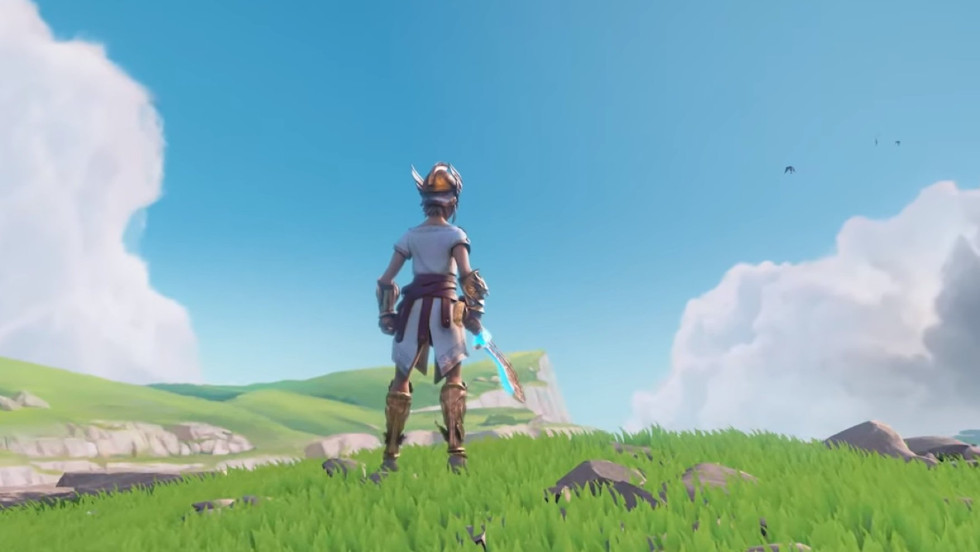 I heard it said on a podcast recently that there really hasn’t been any Breath of the Wild clones surprisingly, so perhaps there’s still an appetite for one!

If you ask me, Ubisoft Quebec is banking hard on theory with their forthcoming Immortals Fenyx Rising.

I recently got to try out four hours of the final build of the game before launch, which consisted of collecting a number of tools belonging to Greeks of legend and learning how to use them to solve puzzles. My playthrough also included three-quarters of a campaign questline.

What I can say at this point is that Immortals Fenyx Rising is one part Assassin’s Creed Odyssey and more than just a dash of The Legend of Zelda: Breath of the Wild.

Immortals Fenyx Rising unfolds itself as a narrative told to Zeus by the enchained titan Prometheus. Steve covered a lot of this in his early playthrough,

I won’t retread other than to say that the narration is largely hit-or-miss for me. It very much finds its voice in a cheesy and comedic vein similar to that of Assassin’s Creed Odyssey. Wisecracking Zeus starts off as fun and funny, but as my four hours passed, I found myself wishing he would just stay silent.

On the flip side, I enjoy that Prometheus’ narration aptly follows the decisions you choose to make. The way he handles probing questions and jests from Zeus is enjoyable, for the most part. But he feels a little too much like he’s cheering you on, which makes him come off a little uninspired.

Combat that won’t take you 100 years to remember

The combat system for Immortals Fenyx Rising is sure to feel familiar as you jump into battle. It’s very much the battle system of Breath of the Wild with a handful of Ubisoft extras that I  quite enjoy.

Fenyx takes on her/his foes in a lock-on style where successful perries and well-timed dodges will slow time and multiple enemies come at you waiting their turn to strike.

However, Fenyx has some tricks that make them extra deadly. I quite like that you have the ability to use your sword for quick light attacks and switch instantly to heavy axe swings simply by pressing the right trigger as opposed to the right bumper. The variation between heavy and light attacks becomes even more enjoyable thanks to Ubisoft’s decision to include a staggering system that allows you to use a combination of perries, dodges and attacks to temporarily down an enemy so you can go brute with your axe.

Another battle mechanic added by Ubisoft that’s quite enjoyable — and not played up very much in Breath of the Wild — comes in the form of aerial combat.

Fenyx is equipped with the Wings of Daedalus — a flying machine from the great Greek tragedy that allows them to fly around the Golden Isles based upon how much stamina they possess. But in battle, the Wings of Daedalus become another tool to use best the evil forces of Typhon. Jumping in the air and using the wings to coast around a group of enemies or simply to propel yourself into the air with your enemy in order to get a larger combo multiplier feels fluid and so very enjoyable.

Gleaming navigation of the Golden Isles

Much like in Breath of the Wild and Assassin’s Creed Odyessy, traversing the vastly open-world takes precedent. There are combat experiences — both mundane and legendary — to partake it. A number of chests and Cauldrons of Coerce also dot the Isles — the latter allowing you to turn resources you find on the island into potions.

Along the way, Fenyx is joined by Phosphor —who is a mix between Navi and the trusty bird companions found in most recent entries of Assassin’s Creed. Phosphor becomes a scout that will help you identify things on the map like the optional Vaults of Tartaros, which provide stat boosts in exchange for solving puzzles. In my playthrough, I didn’t have the time to unlock Phosphor, but my Ubisoft guide assured me that the relationship Phosphor and I would have was likely to feel familiar if I’ve played Assassin’s Creed.

Similar to both of the aforementioned game titles that Immortals Fenyx Rising draws inspiration from, there is a mount taming mechanic. I am a little upset by the fact it appears that all you must do to tame your mount is sneak up on them and press a button at the right time, I enjoy the overall summoning and handling process. 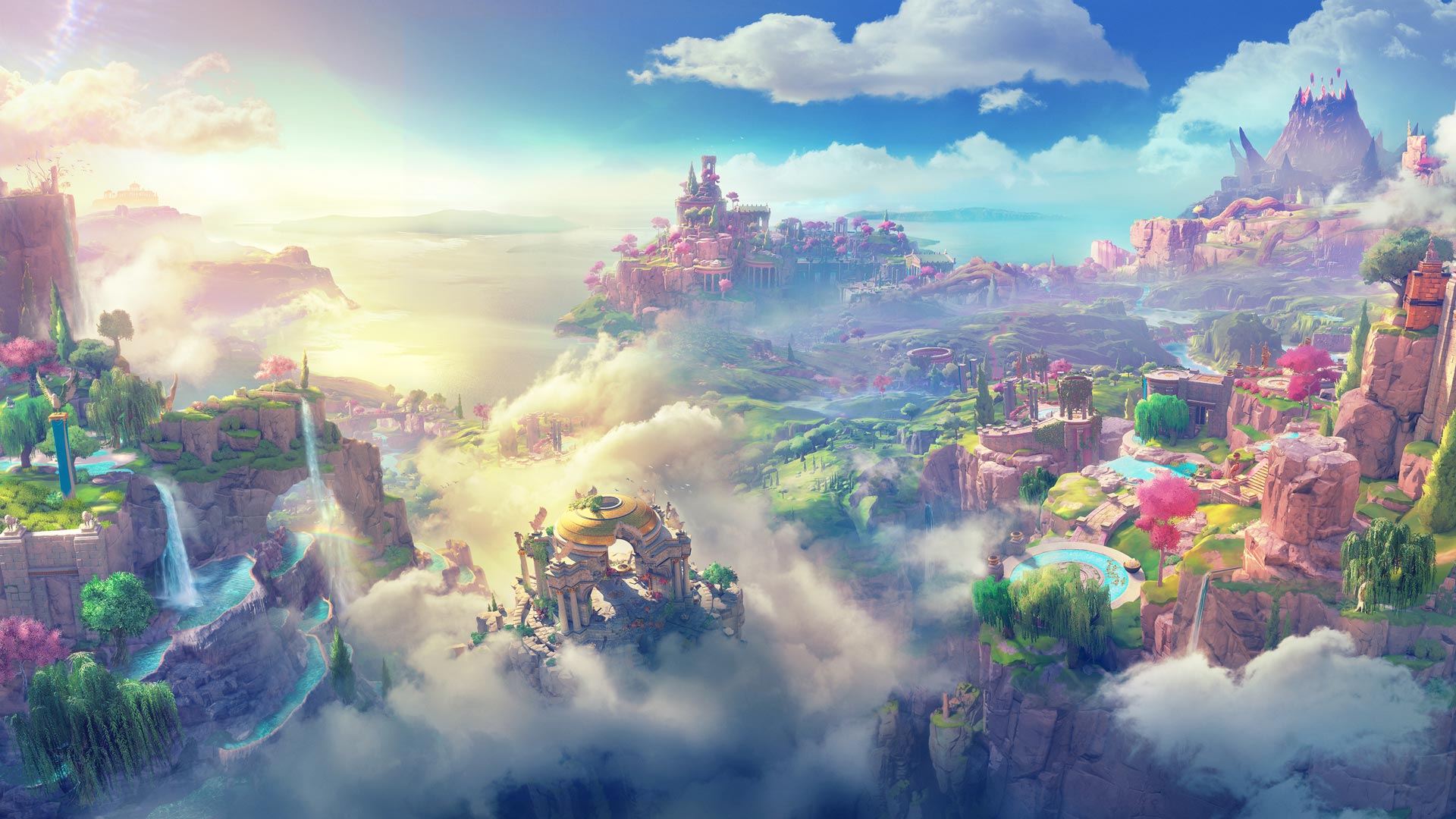 Much like the Batmobile in Batman: Arkham Knight, your mount can be summoned as you glide near to the ground. Likewise, when it’s time to take to the skies, you can eject yourself from your horse and let your wings take over. It’s a satisfying — if slightly cartoonish — mechanic that makes traversal a lot of fun.

There’s also a dash ability that utilizes the wings to propel you forward while running. It’s useful when you are fighting in open spaces to give yourself the advantage of agility, but it’s also great for just getting from point A to point B.

All and all, Immortals Fenyx Rising has no shortage of ways to cross your island adventure.

Today, you can also check out an exclusive demo on Stadia. If you want to play, head here and try the free demo.

Immortals Fenyx Rising is going to be one of those highly divisive titles. Those looking for a familiar Ubisoft sandbox adventure are likely to love it. The story is delivered in a cartoonish and over-the-top manner that is sure to appeal to those looking for a lighthearted adventure. I imagine those fatigued by the formula are going to feel additional burnout from the way this game presents a fair number of mechanics that are already quite explored. This is without question a title that hinges on your answer to the question have you had enough of The Legend of Zelda: Breath of the Wild?