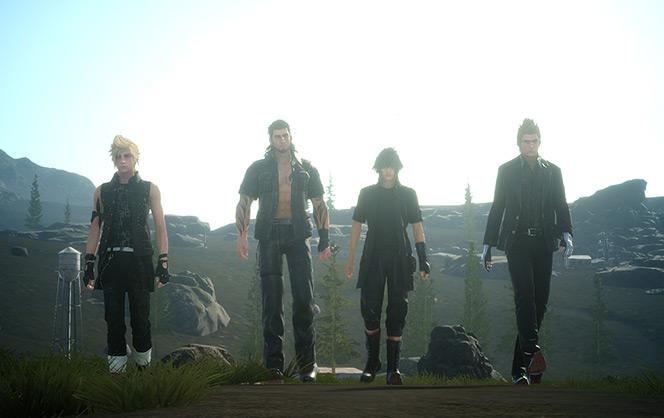 You know the one I’m talking about. It’s the trailer Noctis obliterates an entire squad of soldiers. Now in 2016 we see this stunning new trailer from Digic Pictures that paints a picture of what may come to pass. It really is dark and depressing until the end when King Regis steps in.

In addition, we learn about what the DLC for Final Fantasy XV will consist of. It sounds unreal and a first for the legendary series of role-playing games. For the first time ever, the DLC will release with a focus single episode for each of Noctis’ entourage and will culminate with the series first foray into multiplayer!

Omen is a conceptual CG cinematic trailer created by the world-renowned 3D animation studio DIGIC Pictures, who also worked on KINGSGLAIVE: FINAL FANTASY XV. Noctis navigates a rapidly shifting world, endless waves of enemies, a gradual loss of abilities, and a madness that brings harm to his beloved fiancée. Inspired by the world and story of FINAL FANTASY XV, the trailer depicts a nightmarish “omen” for Noctis’ father King Regis—a catastrophic future that must be avoided.

With FINAL FANTASY XV achieving gold status, development will now shift towards creation of the Season Pass ($24.99) DLC that will provide further content and ways to enjoy FINAL FANTASY XV into the year ahead.

The main focus of the Season Pass is three original episodes that take place during the events of FINAL FANTASY XV. Each episode allows players to take control of one of Noctis’ comrades in all-new adventures that offer unique play styles tailored to each character. Players can explore previously unseen areas filled with new monsters, and even obtain weapons that can later be used in the main game. Episode Gladiolus is the first new character adventure to arrive, and will be followed by Episode Ignis and Episode Prompto. Each episode will be available for purchase individually.

Following the release of the character episodes, Comrades—an expansion pack for FINAL FANTASY XV—will introduce a brand-new online co-op mode for up to four players which features intense battles allowing players to take full control of Noctis, Gladio, Prompto and Ignis as a group. Comrades will be available for separate purchase, and is also included in the Season Pass.

“Last year I travelled around the world and attended many game events. I felt an amazing passion and sense of expectation towards FINAL FANTASY XV from series fans everywhere,” said Sawatari. “From seeing that I really wanted to make it so that the fans could enjoy the game for longer and evolve and expand it even further. I will take these feelings and give them form, to deliver an amazing experience.”