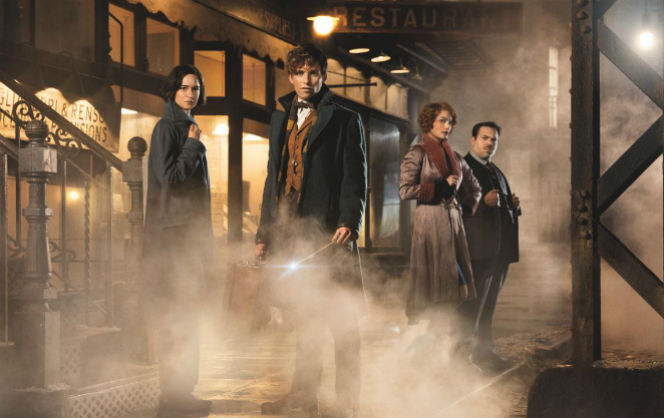 I had the opportunity to attend the Fantastic Beasts and Where to Find Them event put on by Warner Bros in downtown Toronto earlier this week and at the same time, try out the upcoming LEGO Dimensions packs based on the new movie.

As I exited the Eaton’s Center and looked across the street I was greeted with a GIANT suitcase situated in the middle of Yonge and Dundas Square. I made my way to the trunk and soon enough I was inside. The event featured many props and outfits from the movie and it was surreal to be able to see, first-hand, things that were actually used in the film, such as clothes worn by many of the main characters (Newt Scamander, Tina Goldstein, etc.). As I made my way across the exhibit I arrived at the LEGO Dimensions portion of the event. There I was able to try out the new Battle Arena mode, which was added to the game alongside the launch of Year 2 sets. New Battle Arenas can be unlocked with special, golden Toy Tags that are included with all the new LEGO minifigures in the upcoming expansions. The Battle Arena features a range of different game modes; Capture The Flag, Objective, Base Bash, and Tick Tag Boom. While I was there I was able to try out the new Capture The Flag mode and it was a lot of fun. Not only do you need to capture the flag and battle the other players, but there are also traps, hazards and powerups thrown in the mix. Definitely a cool take on the classic playground game. This was also the first time I got to see the Fantastic Beasts and Where to Find Them Story Pack and I must say, I can’t wait to get it. The build looks really cool and imaginative and the minifigure (Newt Scamander) looks great. I especially liked the Niffler build (it can also be built into the Sinister Scorpion or the Vicious Vulture). I also got to interact a bit with the Fun Pack for Fantastic Beasts which was fantastic (no pun intended) as well. This set features Tina Goldstein (another really cool minifig) and the 3-in-1 Swooping Evil which can also be rebuilt into the Brutal Broom or Crawling Creeper.