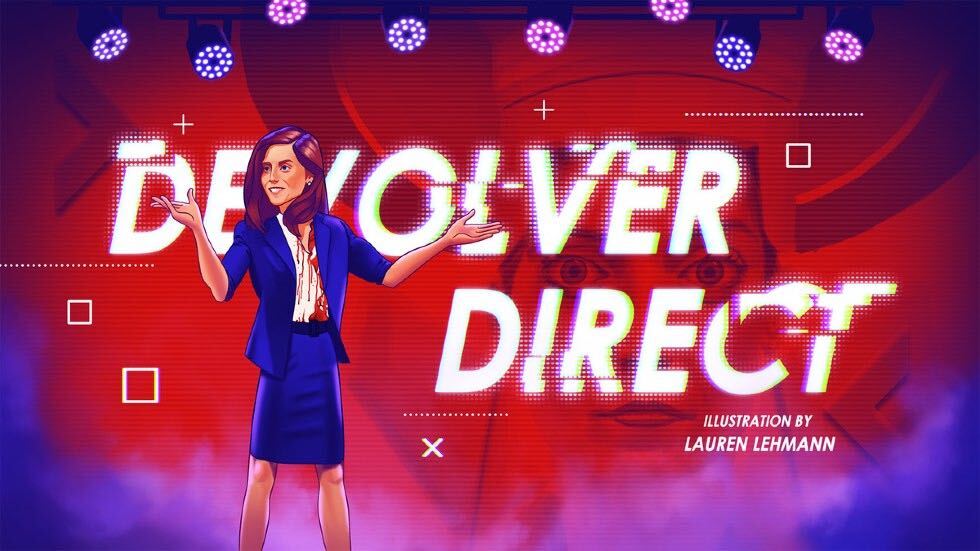 Everything Announced in the Devolver Digital Direct

The Devolver Digital saga continues, with the indie publisher bringing us a presentation featuring new game reveals and trailers, and the increasingly ridiculous ongoing story of Nina Struthers and the malevolent Linda from marketing. The presentation featured many guest stars, including Phil Spencer and Geoff Keighley. But most importantly, My Uncle from Nintendo dropped by to announce Pikmin: Battle Royale, coming in fiscal year 2023. Finally.

Below you will find everything that was covered in the 2020 Devolver Digital Direct.

Phil Spencer stopped by alongside the monster from Carrion, to show a brand-new trailer for the reverse-horror experience. Players will get to tear apart everyone and everything in their way when Carrion releases on Xbox One, PC and Nintendo Switch on July 23rd.

Olija, from Skeleton Crew Studio, was announced for Steam and Nintendo Switch. The game features fast-paced harpoon combat and platforming in a 2D pixel-art style. The full game will release sometime this fall, and there is a demo available on Steam now.

Croteam dropped a new gameplay trailer for Serious Sam 4. Fans of the long-running series won’t have to wait long to play latest entry. You can look forward to wreaking havoc on every alien in your way when Serious Sam 4 releases on Stadia and Steam sometime in August.

A game (?) where you can explore a Devolver Digital show floor in first-person, featuring all the games announced in today’s presentation. Basically, it’s an E3 simulator. It is available now on Steam.

While there wasn’t much that was brand new, it’s always a blast to see what Devlover Digital has in store for us each year. Their focus is less on revealing games, and more on poking fun at the whole concept of E3 and video game marketing trends as a whole. And honestly, I have no problem with that; most of the jokes landed for me, and the concept of their presentations is so outlandish that it’s hard not to appreciate what Devolver Digital has been doing.

I am sure that they’ll be back next year to continue the trend, mocking whatever new marketing tactics take over the video game industry. In the meantime, we have some great games to look forward to, despite many of their announcements beng fake games. Although I do hope that Ubisoft really does announce that new Assassin’s Creed set in 1961 Rural Indiana…