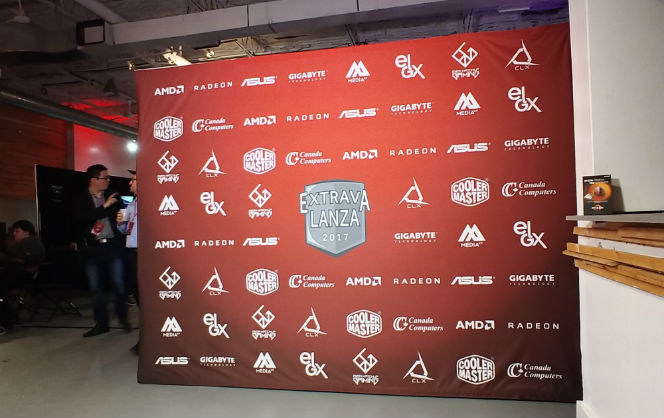 This past weekend we were able to attend the AMD ExtravaLANza in downtown Toronto. The event took place on Saturday and Sunday (November 18th-19th) and featured the best and shiniest in AMD and Radeon technology. The event took place at the notorious Toronto event space, 99 Sudbury. I’ve been here before for the Injustice 2 Launch Party. The location works great in my opinion for gaming events, it just has the right atmosphere.

When we arrived at 99 Sudbury we headed inside eager to take in what the event had to offer. One of the first setups by the door, and the one that excited me the most was Cuphead. Cuphead is one of my favorite games of this year yet I have not had the chance to play it yet. While I was waiting for a chance to play one of this year’s most difficult games, I sat down to play some Battlefront 2 on a format totally foreign to me…mouse and keyboard. As an Xbox/PlayStation guy, PC gaming is definitely not a way of life I’m used to. Surprisingly it took little to no time to get used to the controls. The game itself ran beautifully (a bit better than on my Xbox One I have to say). The computers at the event, to the best of my knowledge, were all running on Radeon’s RX series of graphics cards. The gameplay was seamless and the colors were sharp and vibrant. Now it was time to die a bunch of times in Cuphead. A lot of the first world was unlocked so we just went around facing different bosses. Out of the 3 or 4 bosses we faced, we ended up defeating two of them. Cuphead was played on AMD’s gaming rig as well but this time with Xbox One controllers so I was a little more in my element this time.

What was quite possibly my favorite thing at the event (yes even including Cuphead) was the VR setup they had there. They were running Ubisoft’s ‘Eagle Flight’ VR game on a few HTC Vives. The game had become an eagle, relying on the player tilting their head left, right, up, and down in order to fly around a town. The object was to swoop down and grab prey and drop it off at home base, sort of a capture the flag sort of deal. You were also able to shoot down enemy eagles with an eagle call blast of sorts. This is probably the coolest and best use of VR I have experienced so far and it’s definitely making me want to buy a Vive. While taking an awesomeness overload break, I sat down and observed some of the eSports stuff going on on the main stage. They were going at it in DOTA 2. It’s obvious these people love their jobs. The focus on their face, the yelling of plays and commands, a lot of it very loud. It was fun to watch. There were pieces of AMD and Radeon tech spread out across the whole event space. These companies make some seriously beautiful tech. They had a raffle going on throughout the event, and I was hoping I could walk away with some of the awesome looking stuff they had, but alas I was not so lucky. I’ll definitely be looking into acquiring some for myself soon though.

We played a really fun, physics-heavy soccer game I had never actually heard of before called Freefall Frenzy. The game had players play soccer in a maze sort of field and by using the triggers you would rotate the whole field allowing you to walk on what once was the wall and ceiling in order to get the ball in your opponent’s net. For the fans of fast-paced, co-op party games, I definitely recommend checking this out.

We closed out the day by playing some Star Wars Battlefront II on the Xbox One X. This was my first time hands-on with the new console and I was pretty impressed. The performance was flawless, and it looked great. I definitely noticed a difference from playing it on the Xbox One X at the event and my Xbox One at home. It truly is a powerful console. All in all the event was a lot of fun and definitely worth the trek downtown. We would like to thank AMD for extending an invite to their 2017 ExtravaLANza and we can’t wait for the next one!.