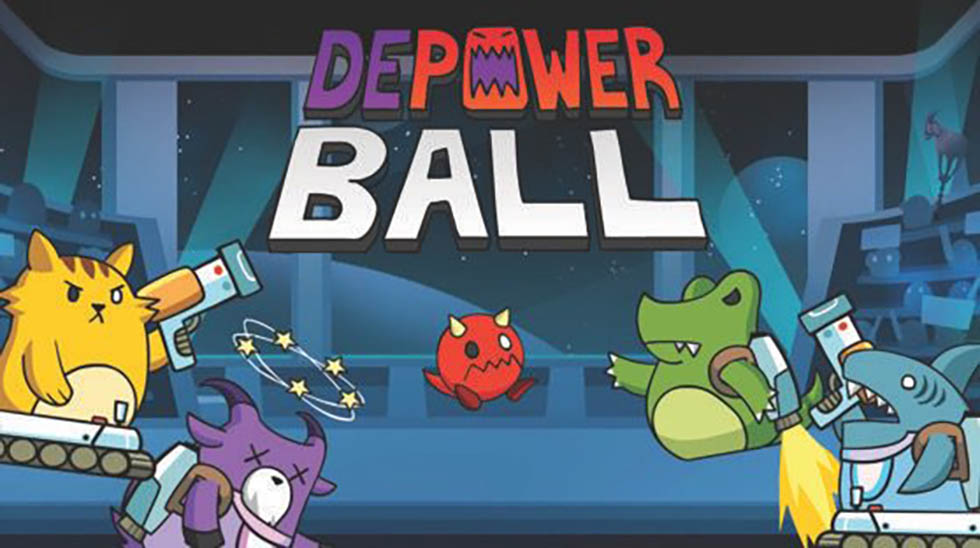 Hurry, the queen is hungry

Rule number one of esports is that for a game to be successful as an esport, it has to have a natural competition element to it that’s as fun to watch as it is to play. Now, what if I told you that Maga Power Games DepowerBall checks those two boxes, oh, and it’s also rather cute to boot. I got the play a match with the producer and programmer of the game, Antonio Miceli, at EGLX this past weekend. In my five-minute playthrough of the game, what I got was an indie experience akin to Starwhal in terms of its accessibility and excitement. As Miceli puts it, “I really wanted to make something that is for everyone.” The object of the game is to compete against up to three other players in navigating the platforms to grab balls of food that are fed to a hungry dragon queen in the middle of the stage. For the next 30 seconds, you’ll race your opponents in feeding the dragon queen the most. Scoring points involves platform racing, thoughtful positioning and skillful shooting. Each player starts with four powers: a laser gun to knock food balls away from opponents, a jetpack to help you boost from platform to platform, and a shield to protect you from being shot, and speed… you know, so you can get things done! At the end of each round, the winner will lose a power based on a vote by the other players. In the case of the laser gun, it’s replaced by a headbutt — which not only lacks range but also adds a stumbling cooldown that will cost you a few seconds of movement. Miceli sums it up as being, “basically, it’s like a gladiatorial-style arena where you want to appease the dragon queen by being the one to feed her the most.”

Miceli believes that what he has created is an easily accessible game that is quick, dynamic and enjoyable by all. “Kids love it because of the cute characters and the easy to understand controls. Older groups of friends love it because they can sort of mess with each other. We even have competitive players come in here because of the balancing system and how it prevents people from winning over and over. It’s an elastic balancing system that prevents as much randomness from happening.”

Now, it’s highly unlikely that you’re going to see Team Liquid or 100 Thieves or any professional esports organization investing 25 million dollars in a DepowerBall franchise any time soon. This isn’t that type of competitive game. But this is one that is sure to be a perfect game for parties or local LANs. “We’ve been hosting tournaments here at EGLX. We had 40 people compete yesterday. And they were closer than I thought they would be because people just kept coming up with new strategies. When this game launches, I hope to run more tournaments just to see how far people can take it competitively.”

Competition changes every 30 seconds. What worked for you last round likely won’t work once you’ve lost a power. So there’s an ever-evolving meta for victory. I am sure that those looking to be competitive will find ways to deal with the loss of each particular power.

Antonio and Mega Power Games plan to have Twitch integration on the game so that streamers will be able to enjoy DepowerBall. “For the voting feature that you see here, streamers can solicit their audience and say hey, I want you to help me influence the outcome of the game. Vote on what you want me to take away.” As an Indie streamer, it can be hard to build an audience. Finding your voice and your brand isn’t always easy, but a great way to do so is by participating with those watching. If you learn about your viewer, they are sure to come back. Miceli has been to a ton of Twitch meetups over the making of this game, and he’s confident he’s learned a way to bridge that gap between streamer and viewer. “ I’ve heard a ton of suggestions and feedback from streamers, and one of the things they wanted was to offer subscriber-exclusive features. And then that serves as an incentive for people to stream it and subscribers to get involved.

Time to power up the depowering

DepowerBall is still in production, but there is a downloadable beta that you can name your price for that will help you see what’s in store for this game. You can even start tournaments already. You know, in case you want to mess with your friends or get real technical!