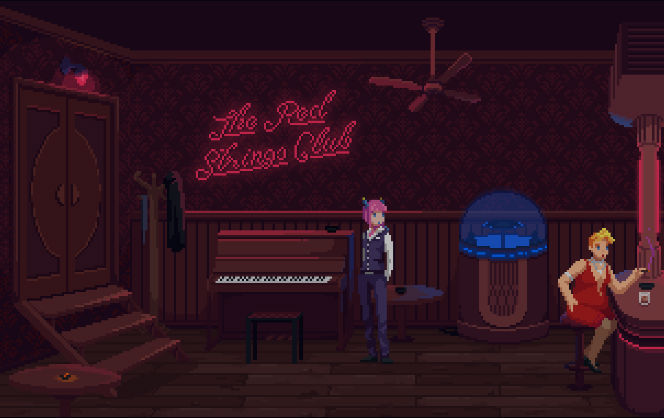 Developer Deconstructteam and Devolver Digital have announced their new game, ‘The Red Strings Club’. This point and click cyberpunk adventure game tells the story of an attempted takedown of an overreaching corporation. The game is set for a January 2018 release.

If your ideal storytelling format includes mixing cocktails while prying information out of unsuspecting bar patrons, committing crimes involving impersonation, and fixing people’s problems with pottery, look no further than this gorgeous adventure.

The professed altruistic corporation Supercontinent Ltd is on the verge of releasing Social Psyche Welfare: a system that will eliminate depression, anger and fear from society. However, the bartender of a clandestine club and a freelance hacker don’t regard this evolution as an improvement but as brainwashing. Alongside unwitting company employees and a rogue empathy android, the duo will pull all the strings they can to bring down this scheme.

“Any game that allows me to mix drinks and influence people’s already poor decisions and then sit down at a lathe to make genetic implant pottery has got to be good,” claimed Devolver Digital CFO Fork Parker. “Topless androids are a pretty big win too.”

Look for The Red Strings Club when it drops on Steam in the new year.