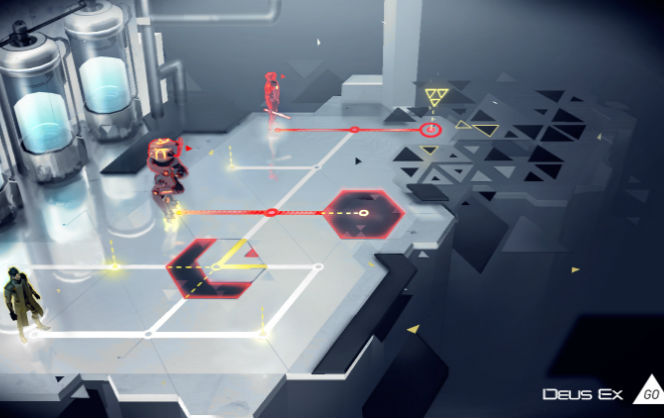 Deus Ex GO Is Now Live On iOS And Android Following in the footsteps of the critically acclaimed Hitman GO and Apple’s iPhone Game of the Year 2015, Lara Croft GO, Square Enix Montréal tackles its most recent re-imagination of a beloved Square Enix franchise with Deus Ex GO. This unique take on a near future dystopian world is available now through the App Store and Google Play for $4.99.

Deus Ex GO is a turn-based puzzle infiltration game set in a stylized interpretation of the Deus Ex Universe. As covert agent Adam Jensen, players will use hacking, combat and augmentations to solve the most intricate puzzles of the entire GO series and unravel the conspiracy behind a terrorist plot.

Square Enix Montréal is designing a smart, game-changing new feature for the GO series that will allow players to expand and customize their Deus Ex GO experience: the puzzle maker. Expected to launch after the initial release, the puzzle maker will allow players to create challenging levels to share with friends. In the meantime, the team will regularly bring new content to the game dynamically through the Live Puzzles module.