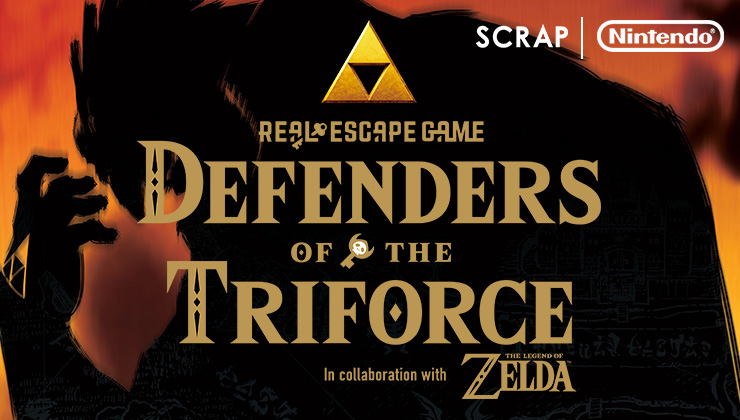 Defenders Of The Triforce Review We all have dreamt that we would one day be able to fully immerse ourselves into the environment of our favourite video games and put ourselves in the shoes of the hero. So when Nintendo and SCRAP reached out to me to see if I wanted to experience the Legend of Zelda themed escape game, Defenders of the Triforce, I leaped at the opportunity.

For those that have been living under a rock, an escape room takes the concept of a point-and-click adventure game of utilizing or solving puzzles around you to escape a room. Players are usually given a back story and the best escape rooms usually have elaborate puzzles and a decent production value. Defenders of the Triforce combines the fandom of the Zelda franchise and with the concept of an escape room.

Before I jump in to my thoughts about the experience let me just put two things out there, I’m a huge Legend of Zelda fan and I’m kind of an escape room connoisseur, no big deal! So going in to this experience it’s no surprise that I had high expectations; especially because Defenders of the Triforce is touring the world for fans to experience it, making it a big deal. The Toronto stop of the tour took place at Queen Elizabeth Building in Exhibition grounds. Inside the building, at the entrance, there were black curtains blocking our view from the experience. The curiosity of wondering what was behind the curtains made my excitement grow. After our tickets were checked the staff told us it was too dangers to go alone and gave us a replica of Link’s hat for our group.

What was behind the curtain was visually a bit disappointing. Inside the game area there were about 50 round tables, a stage, a screen and four areas sectioned off by curtains (similar to how booths at conventions are sectioned off). There were very little decorations in the area where all the groups spend most of their time and solve puzzles. This was definitely loss points for me as it didn’t feel immersive. However it was more immersive in the sectioned off areas that were decorated to represent the iconic villages from Ocarina of Time. Also the staff was dressed up as Gorons, Zoras, Kokiris, Sheikah and even Navi (who gave players clues if they needed help). It didn’t make sense to me to decorate only certain areas of the room and not the whole thing. In addition the props that was used was a bit of disappointment for the price point. For example Link’s hat was given to each group was just a piece of sewn green cloth. I could have look past it if everyone in the group got a hat of their own, as shown in promotional pictures of the game.

Luckily for me things looked up when we headed into the puzzle solving. I won’t go in to an explanation about what the puzzles were, but I will say the overall goal was to retrieve the Master Sword to defeat Ganon. The mission was explained by a Sheikah who played up the cheesy parts of the game, making hilarious commentary to accompany our stressful puzzle solving. The puzzles were meant to be solved step by step but it made it hard to get everyone in the group involved so some people may feel left out at certain points in the game.

For the most part the puzzles in the game ranged from easy, medium and difficult. And thankfully the hard puzzles were well thought out and forced everyone to think outside of the box. There was one exception to this and that was the last puzzle. It’s understood that the last puzzle should be difficult, but it seemed that the answer for it was a little far-fetched. Maybe I’m a bit salty that my group didn’t solve that puzzle and get the master sword. But then again only a handful of groups solved and finished the quest, which leads me to think that maybe the organizers should rethink that last puzzle.

Overall Defenders of the Triforce was different than your typical escape room and people should keep that in mind. If you’re looking to play the game as a Zelda fan, you will be let down by the production value and cheesiness at some parts of the game. However the charm of the staff and uniqueness of the puzzles is something that you will definitely enjoy. That being said I have seen other escape rooms have more unique puzzles. It really comes down to your preference. One thing is for sure, with tickets starting at $45 (General Early Bird Tickets) and going up to $72 (Collector’s Edition Gold) you may want to think twice of whether this adventure is for you.

For more information on Defenders of the Triforce check out their website.