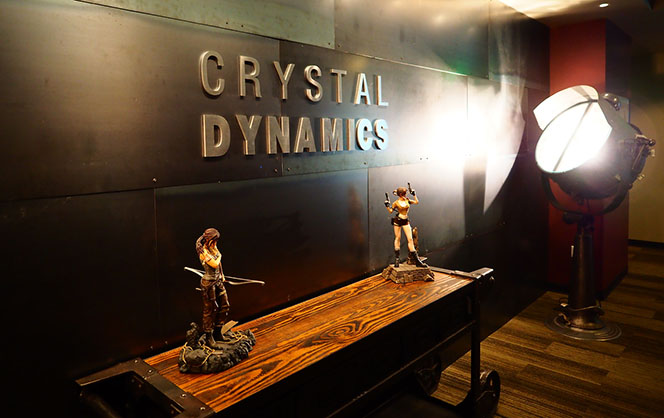 Crystal Dynamics is coming off another big year. The studio celebrated the Year of Tomb Raider, the 20th anniversary of the Tomb Raider franchise, and with all this success behind them, they’ve moved into state of the art new studio. “After months of planning, building, and some very late nights for the construction crew, we’ve just moved into our glorious new state-of-the-art studio!” revealed Scot Amos, co-studio head of Crystal Dynamics. “We have some great new amenities, from hydraulic desks for everyone to adjust as they like, to black-out shades and light absorption paint for those darkness-loving developers.”

In addition to fine-tuning the environment to ensure everyone is working at their best, the new studio has added more offices and team conference rooms, as well as a dedicated “dailies” review room outfitted with the latest and greatest gear. “The new studio will help Crystal Dynamics take our work to the next level,” agreed co-studio head Ron Rosenberg. “Crystal Dynamics’ new studio is nearly double the size in order to make room for all the new positions we’re hiring over the next year.”

Crystal Dynamics is currently hiring, so if you’re interested, stop by job postings here. In addition to all this exciting news for the studio, Crystal Dynamics is also working with Marvel on a new and recently revealed Avenger’s game that will span a multi-year, multi-game deal.