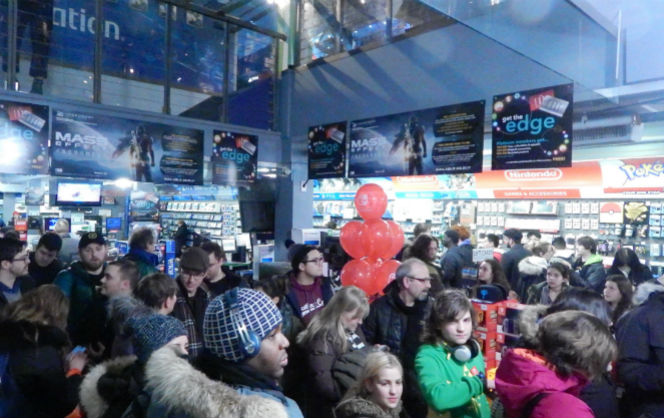 Console Creatures At The Midnight Launch For The Nintendo Switch We recently had the opportunity to attend the midnight launch festivities for the Nintendo Switch at EB Games in downtown Toronto. Showing up about an hour before midnight, expecting to be early we notice the store was already packed to the brim with the most devout of Nintendo fans in Toronto, we later learned many of these people were there since 4 PM!

The excitement was growing exponentially by the second. Any mention of Nintendo was met with thunderous applause. With fans trickling in by the boatload, the highest anticipated console of the last 3 years was about go on sale.

Soon enough, we were introduced to the Guest of Honor, Finn Wolfhard star of the insanely popular, nostalgia fueled Netflix original show, Stranger Things. Finn stars as Mike Wheeler, one of the kids who gets thrown in the middle of all the weird (or Strange) things going on in his small American town. Finn is a huge Nintendo fan and his excitement was very apparent. After his introduction with Ajay from Innerspace (on the Space channel), Finn was ready to cut the ribbon and officially open up sales for the Switch! He was even nice enough to help out at the counter. To round off an amazing night, Finn Wolfhard had meet and greets with fans while an insane amount of Switch consoles were being sold. Everyone was happy, there was laughter, tears, and cheers. I got myself a pretty LoZ Breath of the Wild poster and I got to look at the mountain of Switch consoles for a bit…alas I did not leave with a console myself, I still had a hell of a time.