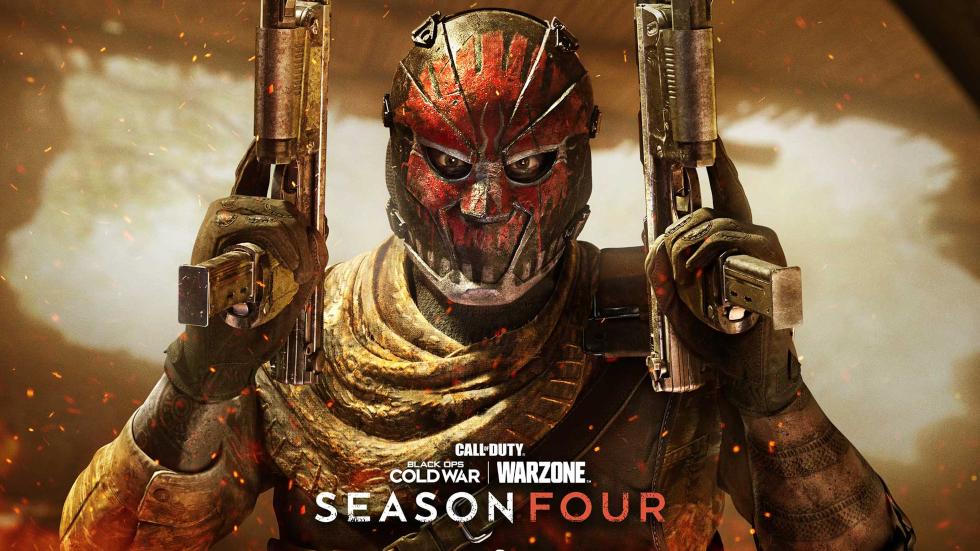 Ahead of the June 17 release of Warzone and Cold War Season 4, Treyarch and Raven Software have outlined what players can look forward to later this week in an all-new roadmap.

Included in Season 4 is a breadth of new content spanning across Cold War and Warzone. For Cold War, this will include new multiplayer maps and new Zombies Outbreak region. Looking at Warzone, map updates will be given to the Verdansk ‘84 map. Unifying both games, a new Battle Pass will be implemented, sporting a variety of new content for players. 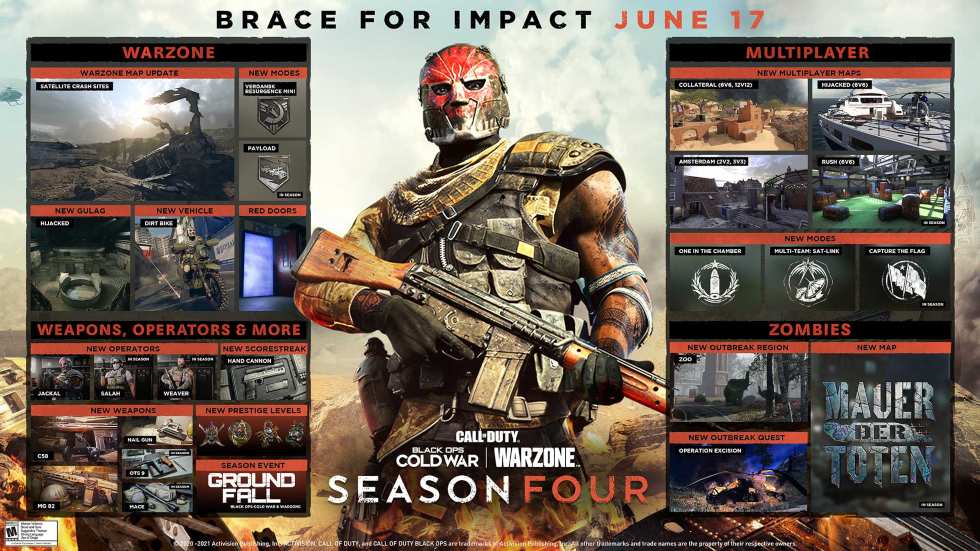 Tying Cold War and Warzone together is the new in-game Ground Fall event. Players will have to secure SAT-Links to unlock exclusive rewards such as Emblems, Calling Cards, and an Epic Secondary Blueprint when each objective is completed. 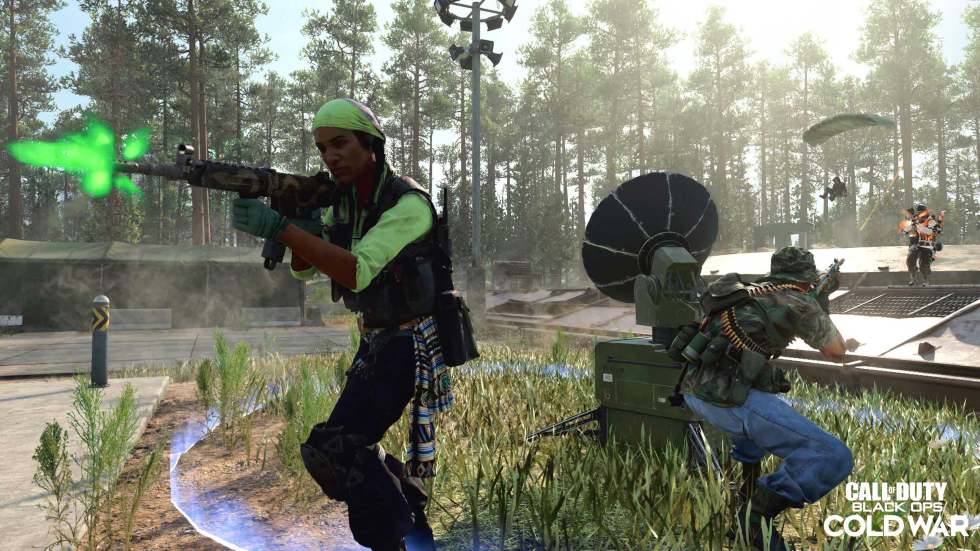 Alongside the new maps, Season 4 will implement three new modes for Cold War multiplayer. These will include Multi-Team: Sat-Link, a Domination-like mode, where players fight for control points to unlock item crates and reach the score limit. The second mode is the fan favourite One in the Chamber, where each player gets one bullet to start and receives additional bullets after each kill in a Free-For-All game type. Last up is Capture the Flag. Although the mode will not be ready for the launch of Season 4, players can expect to dive in later down the road.

Season 4 will also introduce the new Hand Cannon scorestreak. This powerful semi-automatic handgun packs a punch on enemy scorestreaks. But it makes for an even more deadly weapon against enemies. Though, it only has eight rounds in its chamber. So be wary when shooting.

Over on the Zombies side of Cold War, Season 4 introduces the new Outbreak region in the Ural Mountains. The new map is set in a sprawling zoo. Players can explore to complete objectives and unlock Dark Aether intel as the story expands.

Additional Zombies content will be arriving during the Season 4 mid-season event The Mauer der Toten map promises to woo fans of classic Zombies experiences like Firebase Z and Die Maschine. More information is expected upon the approach of the mid-season content drop.

The Verdansk ‘84 map will receive new POIs in the form of multiple Satellite Crash Sites. Players can navigate to these sites to uncover powerful Killstreaks, vehicles, and Field Upgrades. Additionally, players can secure the sites to complete the Ground Fall event and unlock rewards. 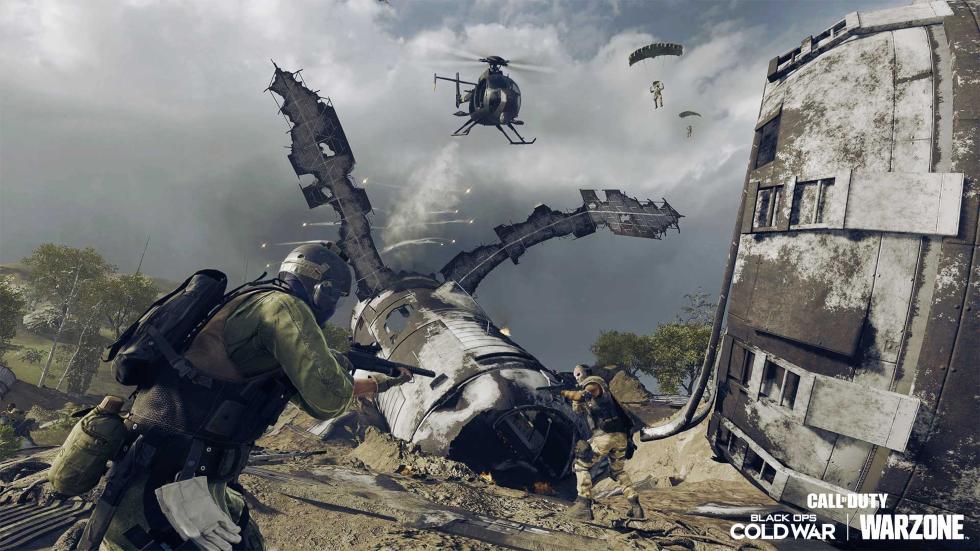 Verdansk will also see Red Doors being implemented. Players of Cold War will recognize the Red Doors from the campaign. Treyarch and Raven Software are keeping hushed on what the Red Doors will provide for players. However, based on the blog post, it appears as though they may be a new method of fast travel during a match.

The Hijacked map is not only being brought back for Cold War. No, the Gulag is getting swapped to a Hijacked-inspired map. As is tradition, the Gulag variant will be a scaled-down model of the map. This map will effectively replace the Standoff map come June 17.

Smaller updates coming to Warzone include a new Dirt Bike vehicle. The Dirt Bikes are said to be nimble and will be the fastest vehicle in Warzone. Players will also be able to pull off stunts mid-air and take a friend along for the ride as two players can effectively ride the bike.

Additionally, as the 80’s Action Hero event is now over, Nakatomi Plaza will be effectively renamed Downtown Tower. The vault has been emptied but the tower will remain as it is in Verdansk.

Rebirth Island will see a Resurgence Mini game mode at launch. During the mid-season event, the first objective-based mode will come to Warzone. Similar to Overwatch’s Escort mode, Warzone’s Payload mode will see teams of 40 work towards delivering a caravan. Players will need to build and destroy barriers while purchasing buildings to aid the team.

Season 4 will also introduce the new Battle Pass as well as new Operators to use.

Included in Season 4 are Jackal, Salah, and Weaver. The Battle Pass will also include five new weapons which are the MG: 82 LMG, C58 Assault Rifle, Nail Gun SMG, OTs 9 SMG, and the Mace melee weapon.

Finally, Season 4 will introduce the ability to gift a Battle Pass to a friend directly through the Black Ops Cold War store. This feature will come to Warzone soon.