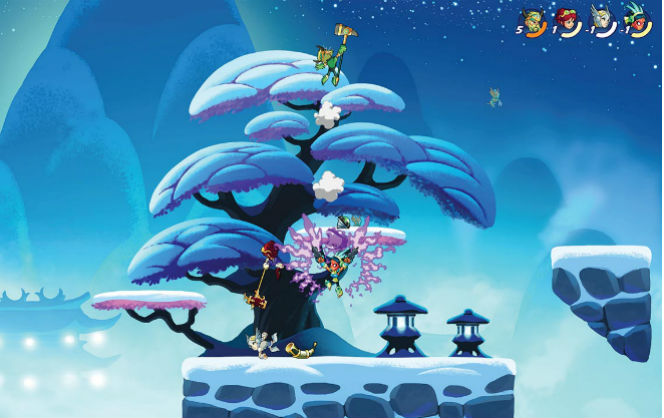 Brawlhalla Is Coming To PS4 And PC Next Week

The epic, free-to-play platformer, Brawlhalla, is coming to PS4 and PC after earning over 7 million player during it’s Early Access run on Steam Early Access, making it the most played fighting game on Steam in 2016 AND 2017.

A new Legend, the corsair, will enter the arena on Oct. 18. The corsair is a momentous Legend release, as she brings with her the cannon, a massive new weapon type great for bludgeoning foes or blasting them.

In Brawlhalla, the greatest fighters throughout history battle for supremacy in the Grand Tournament of Valhalla. Each of Brawlhalla‘s 34 Legends possesses their own abilities and a distinct combination of two weapons, providing every player thirsty for glory options suited to their playstyle.

Warriors can show off their might in a variety of online and offline game modes including ranked queues, free-for-all competitions supporting up to eight players, 1v1 and 2v2 matches, Bomsketball, Brawlball, Snowbrawl and other game modes. When PS4-PC cross-play becomes available, all warriors will be able to compete against one another whether their preferred weapon is PS4 or PC.

“The Brawlhalla community has grown bigger than ever on PC and now we’re ready to welcome PlayStation 4 players into the fold,” said Matt Woomer, Creative Director, Blue Mammoth Games. “It’s the perfect time to become a Brawlhallaplayer. Our newest Legend allows for an entirely new playstyle, the Brawlhalla World Championship Expo is soon, and we will soon enable cross-play, bringing all our fans together in grand competition.”

Brawlhalla will continue to be free-to-play on both platforms, but warriors can purchase the All Legends Pack on Steam or the Founder’s Pack on PlayStation 4 for $19.99 USD to gain instant access to the entire roster of characters, including all future additions.