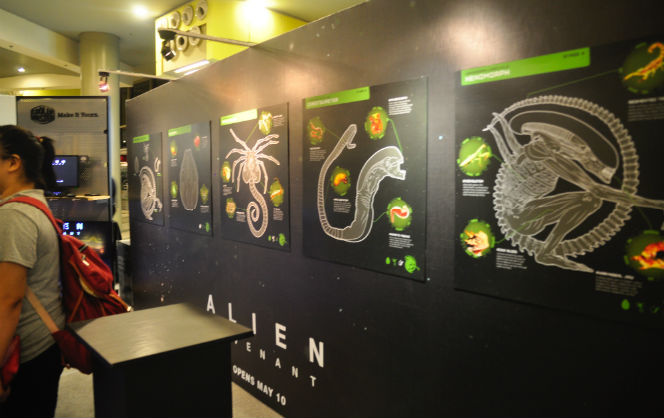 Alien Day, a nod to planet LV-426 from the iconic ALIEN films, will include a variety of fan-focused festivities as the countdown continues for the highly anticipated new chapter in the groundbreaking ALIEN sci-fi thriller franchise, ALIEN: COVENANT, releasing in theaters worldwide beginning May 10.

Produced by Ridley Scott and directed by David Karlak, ALIEN: COVENANT In Utero is a 360-degree virtual reality journey into a living nightmare that offers a terrifyingly close and personal encounter as an alien Neomorph at the time of its birth. Fans will be able to experience the world around them and relive the very first memories of the Neomorph in an immersive environment.

“With the In Utero experience, audience participation is taken to a whole new level. You get to be a Neomorph, exploring what’s happening around you and within you,” said Ridley Scott.

“Before I even touched a camera, ALIEN was a movie that set me on my journey. The film provoked me and opened my eyes to a new level of cinematic immersion. I feel very privileged to be directing ALIEN: COVENANT In Utero and building upon the universe that Ridley has created. Tapping into both traditional storytelling and the emerging technology driving virtual reality, my aim has been to do something new and bold, which Ridley has supported from the beginning,” added Karlak.

People can check out the 360 video on the Oculus platform starting April 26. It will be available in the Oculus Video app on the Oculus Rift or the Samsung Gear VR, powered by Oculus. There will also be a 360 trailer of the experience available on Facebook.

MPC – a Technicolor company – is the award-winning VFX studio that created the special effects for ALIEN: COVENANT, the movie.  As the teams worked on set, the virtual reality unit of MPC – MPC VR – simultaneously developed the immersive experience. Assets for the film were immediately applied to the production of the ALIEN: COVENANT In Utero project. Additionally, the motion capture work for the piece was done at the Technicolor Experience Center (TEC).  Through the development process of this virtual reality experience, MPC has utilized both AMD RYZEN and RADEON technologies based within DELL Inspiron systems.

“The VR work for ALIEN: COVENANT In Utero was a creative adventure because we needed to remain true to the existing ALIEN narrative in an immersive medium, while setting the stage for the upcoming movie.  To reach the widest audience, we worked with our colleagues at the Technicolor Experience Center to ensure that ALIEN: COVENANT In Utero could be experienced on both tethered and mobile HMDs.  Because the ALIEN franchise is a global phenomenon, we are regionalizing the VR experience by supporting 12 different languages,” said Logan Brown Head of VR and Immersive Content – Film US at MPC VR, and Executive Producer at the Technicolor Experience Center.

“For AMD the lines between imagination and invention are increasingly indistinguishable.  We are proud to be supporting this exciting new ALIEN: COVENANT VR experience and to be collaborating with everyone involved.” said Roy Taylor, Corporate Vice President for VR at AMD.

In an effort to bring these types of virtual reality experiences to the masses, AMD has teamed with Alienware and Oculus Rift to expand the consumer’s experience with virtual reality via a tour planned at 15 Regal Cinemas.