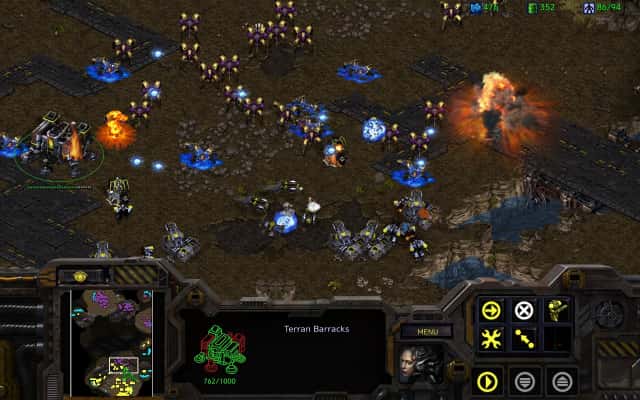 Press Release
One of the highest rated, most celebrated games of all time has evolved. Blizzard Entertainment today unveiled StarCraft: Remastered, a reverently crafted modernization of the original award-winning real-time strategy game. StarCraft: Remastered will offer a full graphical overhaul of the original StarCraft and the StarCraft: Brood War expansion, while preserving the sublime gameplay that captivated millions of gamers around the world and served as the foundation for professional global esports.“StarCraft is a pure distillation of Blizzard’s DNA—its story, its balance, and all the little details reflect our long-running commitment to epic entertainment, and it’s been a staple in competitive gaming and esports for almost 20 years,” said Mike Morhaime, CEO and cofounder of Blizzard Entertainment. “With StarCraft: Remastered, we’re modernizing the original game’s visuals, audio, and online support to ensure that players can enjoy StarCraft for another 20 years and beyond.”

The remastered graphics and audio will bring a modern look and feel to the timeless classic, with widescreen UHD support for up to 4K resolution. Other updates will include new illustrations to enhance storytelling in the StarCraft and StarCraft: Brood War campaign missions; advanced matchmaking; full connectivity to Blizzard’s gaming network for social features and updates; cloud saving for campaign progress, custom maps, replays, and keybinds; support for eight new languages in addition to the original five; and more. While these improvements will bring StarCraft to the modern era, gameplay and balance have been precisely preserved, for an experience that will feel identical to veteran players.

Blizzard is developing StarCraft: Remastered for release on Windows and Mac PCs, with an anticipated release date this summer. Pricing and related information on StarCraft: Remastered will be announced at a later date. Prepare to venture once again onto the planetary battlefields of the war-torn Koprulu Sector; command the forces of the zerg, protoss, and terrans in their struggle for galactic domination; relive the epic saga of Marshal Jim Raynor, Kerrigan, and Praetor Fenix; or just vie for the GG against fellow players in this rejuvenated version of the online competitive RTS that set the bar for an entire genre.

In preparation for StarCraft: Remastered, Blizzard Entertainment will update StarCraft: Brood War later this week to version 1.18. The update will include bug fixes and improvements, including the ability to rebind keys; observer mode; modern anti-cheat measures; compatibility improvements for Windows 7, 8.1, and 10; and more. Once the update is live, StarCraft Anthology, which includes the original game and the Brood War expansion, will be free to download and play.