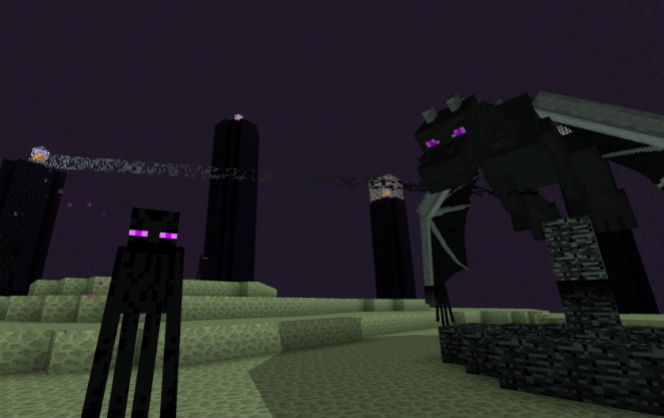 The team behind Minecraft have just released the free to download 1.0 Ender Update. The update will bring some major additions to the Windows 10 and Pocket editions of the popular game, such as The End dimensions complete with the famous Ender Dragon boss battle and they even added 256 blocks to the world height.

The update is free for whoever owns Minecraft on any of the applicable platforms and this version will even ship out with the recently announced Apple TV’s. Players are encouraged to partake in the Android beta for the update and give feedback here.

Mojang put out the following statement about the update:

As part of our vision here at Team Minecraft to help players enjoy their favorite features on the platform of their choice, we’ve been piling on the updates to Minecraft on Windows 10 and mobile this year. In February, we had the 0.14 Overworld Update, which brought redstone and witches. In June, we had the 0.15 Friendly Update, which kept our community busy all summer playing in Realms with cross-device multiplayer via Xbox Live, riding donkeys and horsies, and making sophisticated mechanical devices with pistons. Then just a few weeks back, we released the 0.16 Boss Update to challenge our players in combat with the fearsome Elder Guardian and Wither bosses. Today, we’re super excited to let you know that we’ve started work on our next update which will be coming before the end of the year – the 1.0 Ender Update. With this update, Minecraft on Windows 10 and Pocket Edition will have the majority of the features as our original PC version, and like we did with the original PC version, we’ll be taking off the beta label with the introduction of the End. Legit!

The 1.0 Ender Update will add a third dimension to Minecraft – the End, and its iconic ultimate boss battle, the Ender Dragon. But that’s not all – after defeating the Ender Dragon, you’ll be able to explore the outer islands of the End and its mysterious End Cities. In these End Cities you can encounter the new Shulkermob, pick up cool purple blocks for building (aptly called purpur), farm chorus plants, and even loot the highly-coveted Elytra glider from an End ship.

Another super exciting feature that we’re sure you will be happy about is the 256-block world height. Previously, players of Minecraft on Windows 10 and Pocket Edition were limited to a 128-block high ceiling. With the 1.0 Ender Update, we’re doubling the height to which you can build in your worlds! Perfect timing to let you build a super high tower and glide down across the world with your awesome new Elytra.

There are other features we’re planning on bringing to the Ender Update as well, but we’re keeping those a secret for now! In the meantime, we’d love for you to check out the 1.0 Ender Update via Android beta, help us test it out and let us know what you think before its official release on our feedback site. More info on how to participate in the beta and play it now can be found at the Mojang blog.

Happy crafting, and see you at the End!