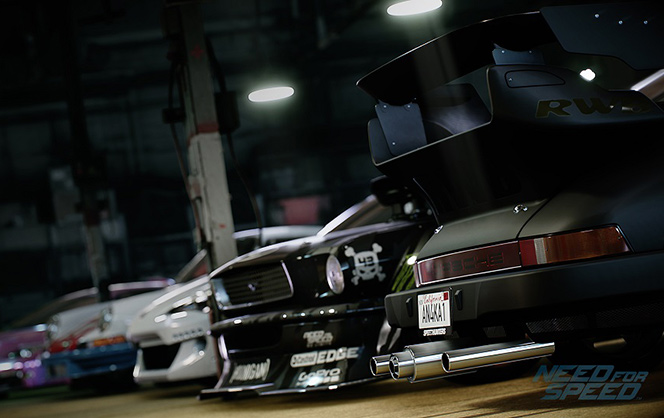 Become The Ultimate Icon In Need For Speed Play as yourself in Need for Speed and witness the action from your own point of view as your entourage of friends and the icons entice you into the Five Ways to Play. Make choices that will determine your path through Ventura Bay as you build your reputation through the different styles of driving and progress on your journey to become the ultimate icon.
The real world automotive icons are the stars of today’s urban car culture and have inspired the stories behind the gameplay by how they express themselves on the streets every day.

Speed Icon – Magnus Walker collects and restores classic Porsche 911s.  He is known for his high speed driving and will push you to enhance your reputation through adrenaline-fuelled driving.

Style Icon – Ken Block is notorious for his style of aggressive driving, as he showcases in his phenomenal YouTube GYMKHANA series. Earn his recognition by mastering the art of precision sliding and jumping through corners and on the streets.

Build Icon – Nakai-san is the founder of RAUH-Welt BEGRIFF (RWB), a world renowned tuning and customizing company. Focus on creating that perfect customized ride as you look to impress him.

Crew Icon – Risky Devil are an infamous drift crew.  These guys are the kings of close proximity driving and control. Ride in packs, inches away from wiping each other out as you get to grips with precise control and wild drift trains.

Outlaw Icon – Morohoshi-san doesn’t care how people categorize him, he just does what he wants. He’s often seen on the night streets rolling around in his customized ride. Risk it all as you mess with and escape from the cops to grab his attention.

“We’re honored to be working with these icons – they live and breathe the lifestyle we’re looking to recreate and have been such an inspiration to the team as we return Need for Speed back to greatness,” said Marcus Nilsson, Executive Producer at Ghost Games. “We wanted to create a powerful story that’s emotional but also pushes the boundaries of technology by adding real-time compositing to the power of Frostbite. This allows us, for the first time ever, to blend live action film seamlessly with your in-game car and garage.”

Taking inspiration from the film industry, the addition of real time compositing has allowed Need for Speed to offer a unique narrative for every player. Your customized car will feature in the live action sequences, showcasing personal choice within the game and blurring the lines between live action and in-game.