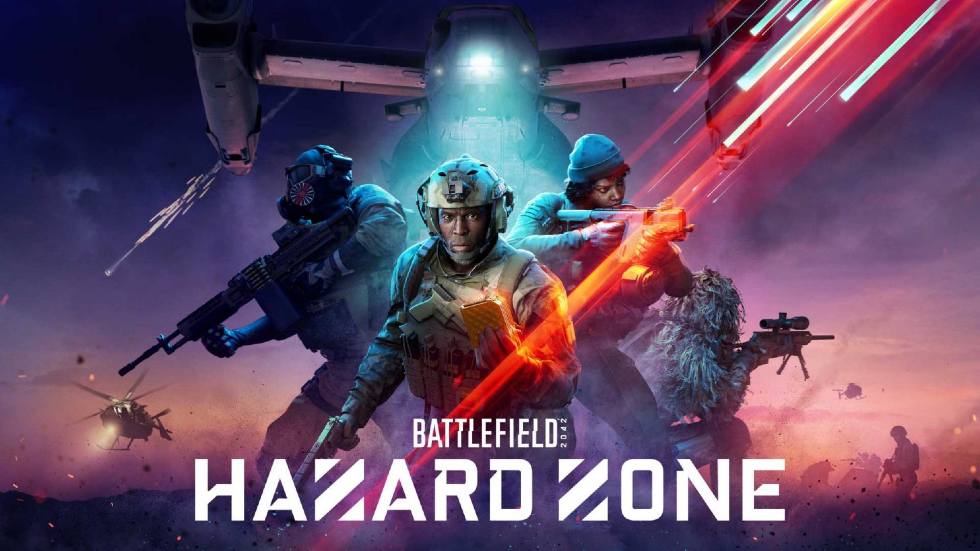 DICE and EA have revealed a new game mode coming to Battlefield 2042 and while we’ve already seen a glimpse of All-Out Warfare and Battlefield Portal. Today’s reveal is all about Hazard Zone, an all-new experience that is promising ‘edge-of-your-seat gameplay with the best of the Battlefield sandbox.

Hazard Zone is a squad-based multiplayer mode, where you and three players must search and retrieve Data Drives spread across the battlefield. While you’re looking for these drives, you’ll be fighting other squads looking to capture the same drives and Occupying Forces. You’ll need to gather the Data Drives and decide when to extract as a storm closes in while you’re playing, oh and you have one life to succeed.

There are two extraction windows with the first one opening shortly after insertion at a random Extraction Zone. Once it shows on the map, you’ll need to hustle and get onboard. After this, the storm moves into full swing and takes effect, making the map dangerous. After the second and last extraction begins and you have one shot to make it out alive and during this final retrieval phase, you’ll need to find the Data Drives, which are being tracked by the enemy. This is where the risk versus reward aspect of Hazard Zone comes into play — do you seek out the other Data Drives or escape with your life?

The final extraction point will force the remaining teams into battle and any team left behind loses the round and any Data Drives they have gathered.

Players will be required to pick specialists and loadouts and upgrades before deploying at strategic tactical points across the map. If you think this sounds familiar then you’ve likely played Escape from Tarkov. Hazard Zone uses Uplinks, laptops spread out across the map that offers support. Three types of Uplinks will be available at launch: Vehicle, Ranger, and Reinforcement Uplinks.

In addition, Specific Uplinks can be used to revive your squadmates. DICE is calling them Reinforcement Uplinks and can be collected and used any time by deploying them from your tablet.

By securing these Data Drive you can sell them to the Dark Market, an in-game store using in-game currency. Dark Market Credits are used to buy Tactical Upgrades, weapons, and gadgets in skirmishes.