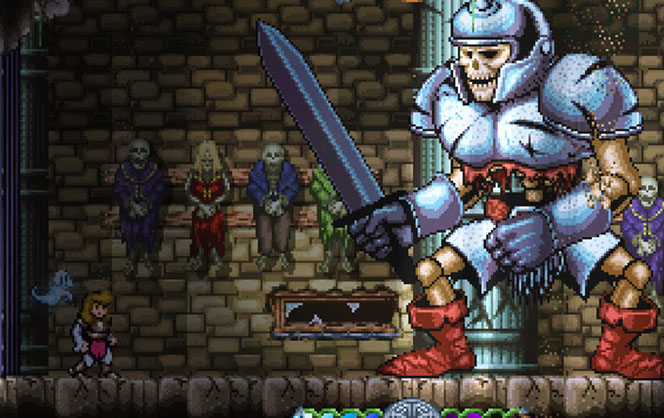 We’ve covered Wonder Boy: A Dragon’s Trap recently and have been following Battle Princess Madelyn. I also grew up with Ghouls N’ Ghosts when I was a child – a game I spent endless nights playing and still to this day play on my old systems around Halloween. We keep hearing about Battle Princess Madelyn and boy are we excited for this one.

Battle Princess Madelyn pays tribute to such games as Ghouls N’ Ghosts, as well as Wonder Boy. Christopher Obritsch and his daughter Maddi are working together to bring to the Nintendo Switch, Wii U, PC, Xbox One and PlayStation 4, Battle Princess Madelyn, a game that looks to fill a void that publishers like Capcom seem to have forgotten about.

For those who are looking to donate, check out the Battle Princess Madelyn Kickstarter.

Does this game not give you a good feeling? You can even try the first five stages on Windows.

“After what seems like an eternity, we’re finally ready to show the world Battle Princess Madelyn! We’ve been hard at work over the last few months refining our Pre-Alpha build in order to let our fans sample our game before they pledge on our Kickstarter.” said Creative Director at Causal Bit Games, Christopher Obritsch. “We are also pleased to reveal that we have teamed up with Limited Run Games to offer some incredible physical rewards for supporting us on our crowdfunding journey and beyond. Play our Pre-Alpha and if you like it, please support our campaign!”

– Ten levels, with up to five stages each, with some hidden for players to discover

– Plus much, much more